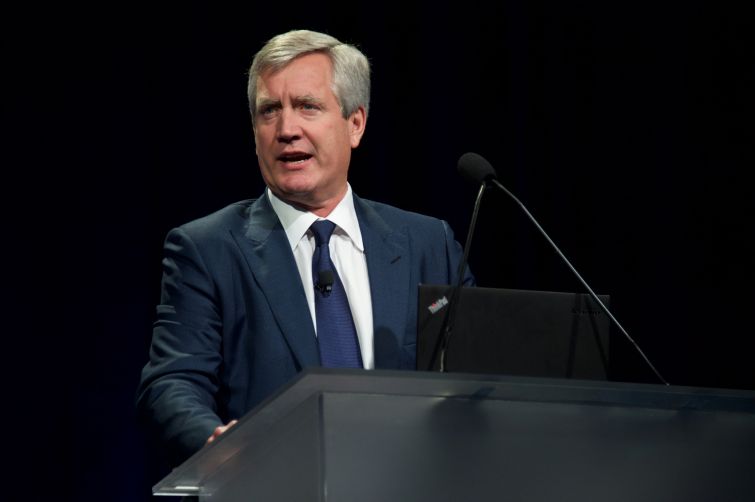 Michael Van Konynenburg, president of Eastdil Secured, was bullish about most sectors of the commercial real estate industry despite concern over rising interest rates and global uncertainties, in the economic overview he provided at the 11th annual Allen Matkins “View from the Top” conference held last week at the Beverly Hilton in Los Angeles.

“There are some real concerns, particularly around inflation and rate hikes,” Van Konynenburg said. “Will the U.S. economy overheat or will this keep us in this Goldilocks path we’ve been on for the past four, five or six years? Could the upcoming [U.S. midterm] elections increase the uncertainties or could they increase consumer confidence?”

“Looking at the S&P where we had a 40-plus year return, where the REITs [and] real estate overall had an increase in returns of 14 percent,” he said.

He painted a particularly rosy picture of the U.S. economy—with unemployment down to levels not seen in almost two decades, rising household net worth and small business optimism, which he said, was “the biggest driver of the economy,” as well as consumer confidence at an 18-year record high.

“Someone pointed out to me that was exactly where it was in 2000, before the dot.com bust so who knows if it’s a positive or a negative,” he said. “Our economy is 70 percent consumer driven and it’s a very positive outlook.”

Given how tight the U.S. labor market is, the forward inflation market of 3.3 percent in the Underlying Inflation Gauge used by the Federal Reserve is expected, but a “real concern.”

Inflation, he said, has typically been good for the industry “as long as we don’t have too much of it and the Fed starts raising rates multiple times to head it off.

“We’ve had seven rate hikes so far and there will be another one, potential two more this year,” he said, though they were still optimistic, despite the “noise out there.”

“We definitely have challenges. We’ve seen a Fed that has been tapering their balance sheet, letting bonds roll off as our deficit is exploding. There is forward inflation that really is flowing in some sectors and growing. You [see] the cost to invest has gone up quite a bit,” he said, given how strong the dollar is, but “there’s still $7 trillion in sovereign wealth bonds in the world that are zero or negative yields.”

However, in terms of the debt market, he said he’s been amazed at how little volatility there has been over the last 18 months. “We saw spreads tighten 25 percent in 2017. They’ve been stable now,” he said. The CMBS market continues to be very strong with life companies very active in the space again. (In 2017, he said, life companies did not take their full allocation, but now, in contrast, they are starting to run out of their 2018 allocations.)

“Every leg of our stool continues to be surprisingly strong,” he said, before focusing on debt funds and the mortgage REIT space. He predicted the industry would see year-on-year growth in origination volume, with debt funds up around 42 percent in total year-over-year volume. While it only represents 10 to 12 percent of the market, it’s the fastest growing market sector, he said.

The area where the industry has seen real tightening this year is in the search for yield. “There has been a higher amount of capital seeking a higher fixed income return,” he said, which has showed up in tight spreads within transitional deals.

“The bad news is there is no 3 percent fixed rate money left. There really isn’t a sub-four coupon on a fixed rate deal. It’s still pretty benign when you see how strong the economy is,” he said.

In terms of investment activity, volumes peaked at $375 million in 2015, but have remained flat year-to-date, he said.

Van Konynenburg said outside of the West Coast investors were being picky about what to buy. That said, industrial is at the top of the asset class for investors, with student and senior housing, manufactured housing, life science, medical and medical-oriented properties creating a huge demand nationally and internationally. The strength of the hotel and hospitality sector markets this year in both the operating and investing and pricing is also a bullish sign he said given how economically sensitive the sector is.

Retail, however, except for prime product, is facing ongoing challenges.

AmongVan Konynenburg overall concerns, he noted the rising cost of construction, lack of skilled labor, growing trade issues and the upcoming midterm elections in the United States. But even with what is sure to be a volatile event, “the outcome could actually extend the cycle and be positive,” he said.

“If the Democrats take the house, that puts a check on Trump and you’re clearly going to have gridlock which markets typically like,” said Van Konynenburg. “If Republicans hold the Senate and you continue to see the appointment of judges that lean more pro-business…we would continue to have that tailwind.”

That said, a trade war could “put a lid on things,” but he still opted for “the more Goldilocks outcome of this election season.”

“The continued focus will be whether we can ignore all the political noise and focus on what’s actually going on to the actual economy and markets or do we get swamped by it. That’s when people lose confidence.”