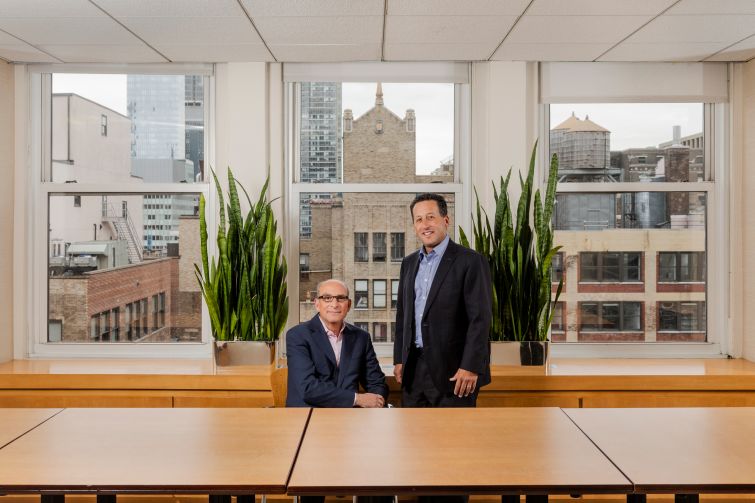 Marc Wieder and Robert Gilman are usually the first people their clients call when considering a deal to learn about the tax implications. But this year, with President Donald Trump’s new tax law going into effect, the Anchin accountants have been in higher demand.

The pair, with a combined 69 years of experience in the field, has been on the offensive to educate clients about the changes in the law long before the filings are due, with Wieder addressing it on a mini-speaking tour at conferences and on webcasts.

“If you’re going to tell your client in April that ‘By the way, you owe X dollars because of the change in tax law,’ they’re not going to be happy,” said Wieder. “That’s why we did a lot based on what we knew at the time and the data we have so that there wouldn’t be these surprises.”

This approach has left clients feeling secure going into the 2018 season. Larry Gattegno, a vice president and the CFO at JEMB Realty Corp., has worked with Wieder for nearly 14 years and praised his accountant’s ability to distill complex tax laws into easy-to-understand information.

“The minute they heard of any change in the tax law they immediately schedule a meeting,” Gattegno said. “[Wieder’s] really proactive and he gives very, very good advice.”

Wieder, 60, a Plainview, N.Y. resident, took a job at Anchin immediately out of the University of Buffalo and has been with the firm for 38 years. The married father of two said the focus on client services has kept him at the firm. He has worked with some clients for three decades.

“To me that’s the most gratification that I can get—knowing that a client wants your opinion,” he said. “I’m very close with a lot of my clients and it’s nice.”

Gilman, 51, also a Plainview, N.Y. resident, has worked closely with Wieder throughout his 29 years at the firm. He joined Anchin after graduating from State University of New York College at Oneonta.

He joked that working with Wieder kept him at the firm this whole time, but said it was really about the chance to make a difference in his clients’ lives.

“What they keep after taxes is so important,” he said. “Being able to help them and strategize with them is what makes this firm unique.”

While the two executives have seen a lot of tweaking to the code in their careers, as well as sweeping changes like the Tax Reform Act of 1986, they’ve kept stalwart in trying to understand its implications. Since Trump’s tax law has some of the most sweeping changes to the code in decades with new guidelines being released daily, Gilman and Wieder have been plenty busy.

After spending months going over the changes, including in large round-table discussions with their Anchin co-workers, Wieder and Gilman have been using their clients’ past returns to estimate what their 2018 returns will look like. They had one simple piece of advice for people in the real estate industry: Don’t delay getting your returns ready this year.

“Companies need to get prepared—be ready with their numbers—a lot earlier this coming year,” Wieder said. “Waiting until the last minute is not going to work with all the decisions and all the thinking that has to go into this.”

Trump’s Tax Cuts and Jobs Act was signed into law in December 2017 and overhauled a good chunk of the tax code while reducing the number of income tax brackets and altering the rates.

The new law limits deductions taxpayers can take on property, state and local taxes (SALT). This will result in about 8 percent of New York State residents seeing an increase in what they owe, the report found.

For real estate professionals, laws altering rules around pass-through deductions, accelerated depreciation and excess loss limitations will change the way they think about their business long-term.

“We always [speak] with our clients about, not what happened last year, but what’s going to happen in a year or two years,” Gilman said. “Now, that thinking is really spread out further so that sometimes you have to plan five years [in advance].

“What you decide today, in some of these things, is going to affect how your business operates, taxwise, down the road,” he added.

The effects will be different for everyone, but Wieder has a simple axiom to figure out where you might land come tax time.

“What we would typically say is, if you make money, you may pay less in taxes. If you lose money, you’ll pay more in taxes,” he said.

That’s based on what Wieder and Gilman categorized as one of the biggest impacts of the new law: the excess loss limitations. Under the old code, if a person lost money on an investment he could use that amount to offset the amount he paid on his personal income.

So, if a person made $2 million this year, but took a loss of $1 million on an investment, she could offset that on her personal income and only pay taxes on $1 million of income. However, the new regulations cap the amount people can deduct to $500,000 if filing a joint return and $250,000 if filing as a single.

“It changes the way you do business,” Wieder said. “If you have multiple properties, you might say. ‘I can only afford to renovate one this year because it’s going to throw me into this excess loss limitation situation.’ ”

Another change the pair warned about is the interest limitation on adjusted taxable income. Under the new rule, a company that has gross receipts of more than $25 million can only deduct 30 percent of net business interest. Even if your company doesn’t generate $25 million in revenue, if the co-owner of a building does it will impact you come tax time.

If the co-owners company clears the $25 million threshold, you would now be subjected to the 30 percent limitation under the new code.

The law has an exception for real estate professionals, allowing them to deduct 100 percent, but it subjects a property to the Internal Revenue Service’s Alternative Depreciation System. That generally increases the number of years a property is depreciated and lowers the annual deductions.

According to some experts, it might seem obvious to just go with a 100-percent deduction, but there are some downsides to the ADS system including one which was inadvertently created by the new tax law.

Under the old laws, if an owner made qualified improvements to tenant spaces, it became eligible to speed up its depreciation life to 15 years.

Physical improvements to buildings, leaseholds, restaurants and retail were all treated differently. But the authors of the new code rolled them all into one, and accidentally left out the 15-year depreciation bonus.

“There was a major drafting error,” said Thea Kruger, a tax principal at Berdon. “It’s clear they intended it to remain a 15-year life.”

Correcting this mistake would require an act of Congress, but until then, Kruger sees it as one of the biggest things commercial real estate owners have to watch out for during tax season.

“These types of improvements are getting way less advantageous,” she said. “[Owners] are going to be taking a very close look at the line between what’s considered a repair or what’s going to be an improvement.”

But it’s not all doom and gloom. Both Gilman and Wieder think they’ll be able to make up the differences for some clients using the changes to the 199A deductions of flow-through income.

The changes allow for a maximum deduction of 20 percent on flow-through income, which is income from partnerships and LLCs. There are multiple factors to see if a person can take the full 20 percent deduction, which includes the amount of W2 wages and depreciable assets.

“Depending on the magnitude of the income, the loss of state and local taxes could be insignificant compared to the benefit you’re going to get from this deduction,” Wieder said.

And while Gilman and Wieder usually have answers for clients’ issues concerning how the new tax laws will change their filings, the duo can’t answer the burning question on the mind of a lot of their bigger clients.

“They want to know what the effect will be on everyone else, not just the real estate owners,” Gilman said. “People are going to lose their state deductions. Is no one going to live in the city?”

“You don’t know,” Wieder added. “Until the 2018 returns are prepared and filed and people see what the impact on them will be, we really don’t know what the ramifications are that this law will have.”