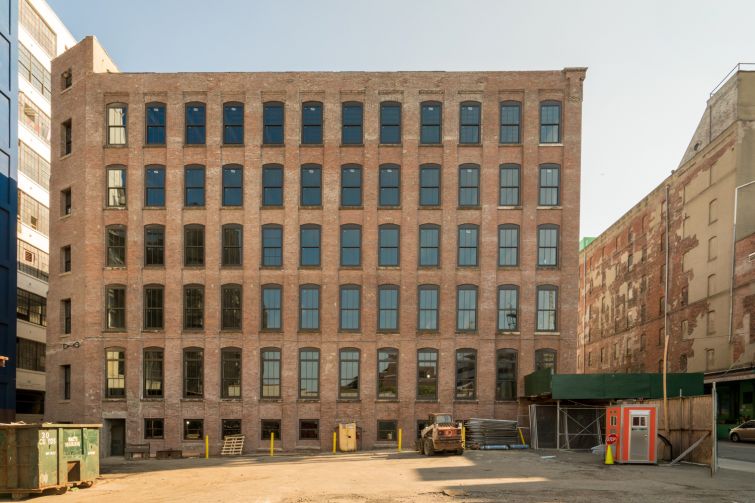 One of the heavy timber buildings at the 47 Hall Street complex in Brooklyn, which is undergoing a major renovation. Photo: Cameron Blaylock/For Commercial Observer 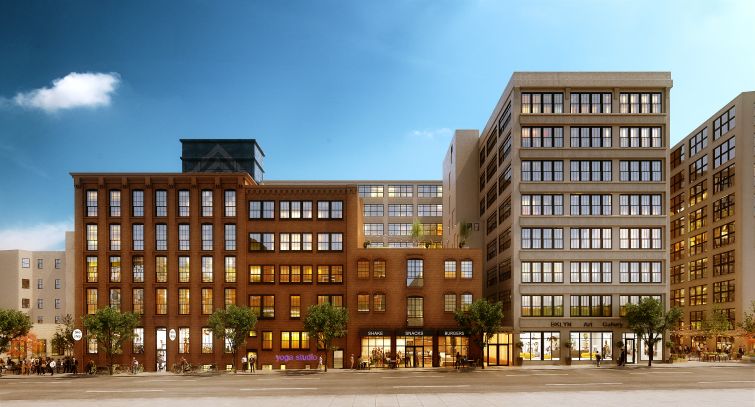 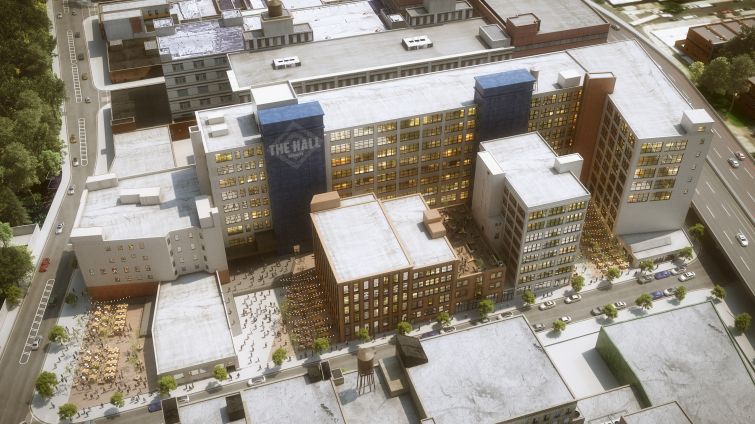 A bird's eye view of The Hall. Image: RXR Realty 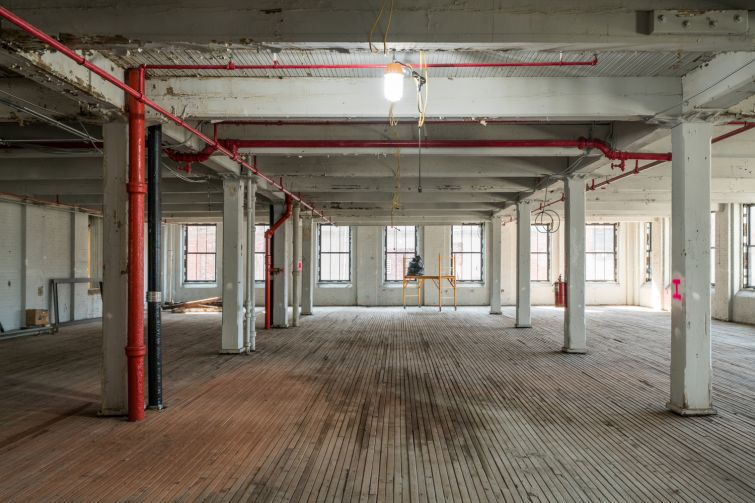 One of the older, heavy timber buildings at RXR's 47 Hall St project is in the midst of getting new utilities, windows and infrastructure. Photo: Cameron Blaylock/For Commercial Observer 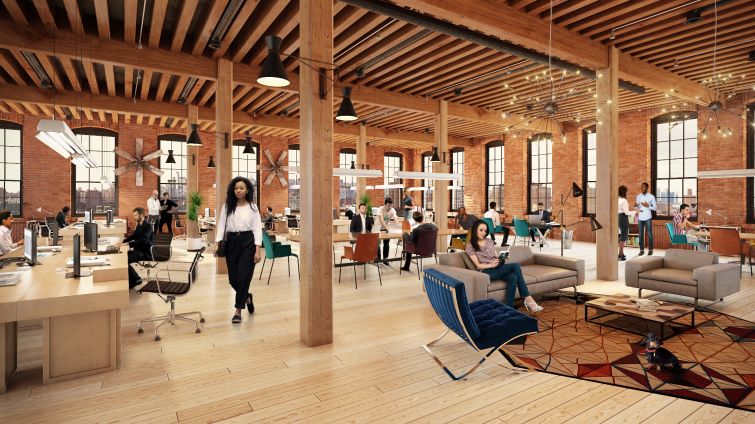 A rendering of what one of the heavy timber buildings, "Building I," will look like after it gets renovated. Image: RXR Realty 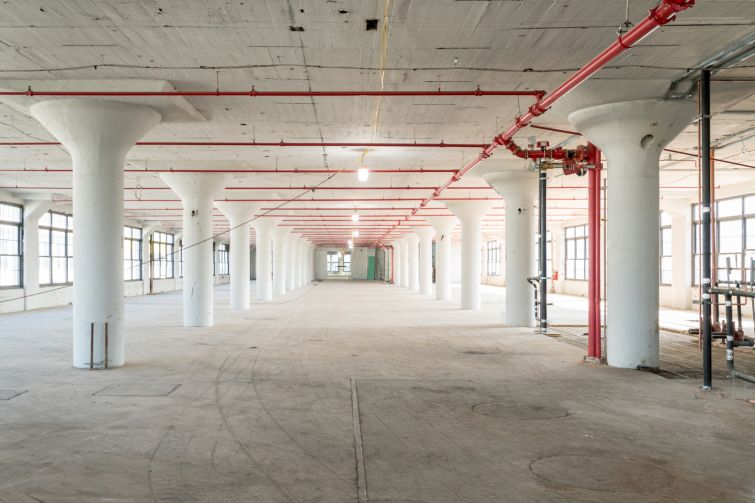 A look at one of the renovated floors in an Albert Kahn-designed factory building at 47 Hall Street. Photo: Cameron Blaylock/For Commercial Observer 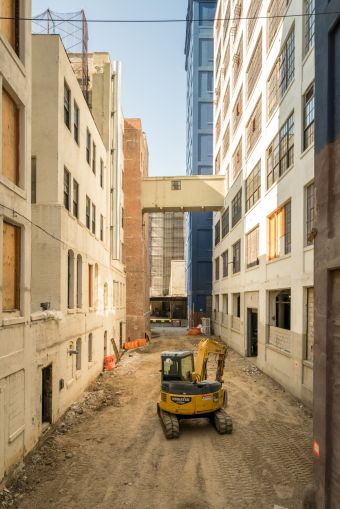 The alleyways between the buildings at 'The Hall' will eventually become landscaped common areas with seating and space for events. Photo: Cameron Blaylock/For Commercial Observer 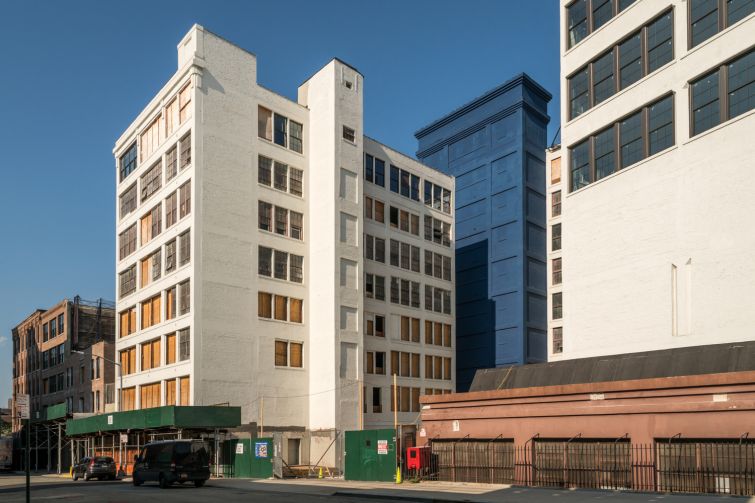 One of the street facing entrances to the complex will become the "front porch" with space for events. Photo: Cameron Blaylock/For Commercial Observer 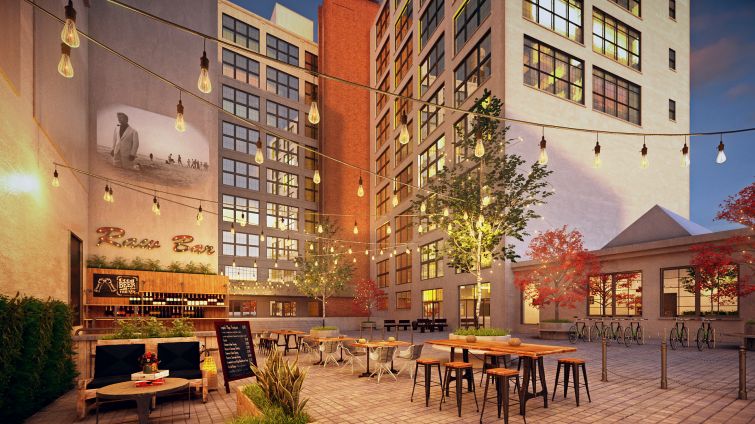 A rendering of the 'front porch plaza' along Hall Street. Image: RXR Realty
Previous Next

At the turn of the last century, the Brooklyn Navy Yard was home to one of the biggest wholesale grocery markets in the world. At Wallabout Market, Brooklynites could buy meat, fish, dairy, produce and other kinds of foodstuffs, which would go onto grocery stores, restaurants and institutions. Across the street, among rows of cold storage warehouses, the Mergenthaler Linotype Company manufactured printing presses in a block-long industrial complex along Hall Street between Flushing and Park Avenues.

The Mergenthaler family built the oldest of the buildings, three- to six-story timber warehouses, in the 1890s, and then they hired well-known industrial architect Albert Kahn to design slightly taller concrete factories in the 1910s and 1920s. Now RXR Realty is revamping the 10-building, 650,000-square-foot complex into a creative office development called The Hall. Marvel Architects is overseeing the renovation, which includes replacing windows, repairing the building facades, replacing electrical and HVAC systems and upgrading the freight elevators.

The buildings are already connected via a series of skyways and basement passages, but RXR hopes to unite them by activating the ground-floor spaces in a pedestrian-friendly way. The ground floors will become 100,000 square feet of retail, expected to host food and beverage tenants, health clubs, art galleries, maybe a doggie day care, and other kinds of “experiential” concepts, according to David Gise, the executive director of The Hall. And existing pathways between the buildings will be landscaped, spruced up and turned into seating areas known as “porch plazas.”

“Our goal is to lean into the campus feel for the property and build community, both within the project and in the local community at large,” Gise said. “The goal is to bring the community in so they can flow through the courtyards.”

The plan is to bring workers and neighbors to the project with movies, concerts, markets and other kinds of events.

No leases have been signed with office or retail tenants, but RXR expects to close deals and announce tenants this fall. Diana Boutros and Alan Schmerzler of Cushman & Wakefield are leasing the retail, and C&W’s Joseph Cirone and Patrick Dugan are taking care of the office leasing. They’re marketing the project to a mix of light industrial manufacturers, artists, architects, tech startups and other kinds of creative office tenants.

RXR and Westbrook Partners purchased the industrial assemblage from Cammeby’s International, Eli Fruchthandler and Bruce Federman for $161 million in 2016. The $20 million renovation began in January and is expected to finish in the spring.