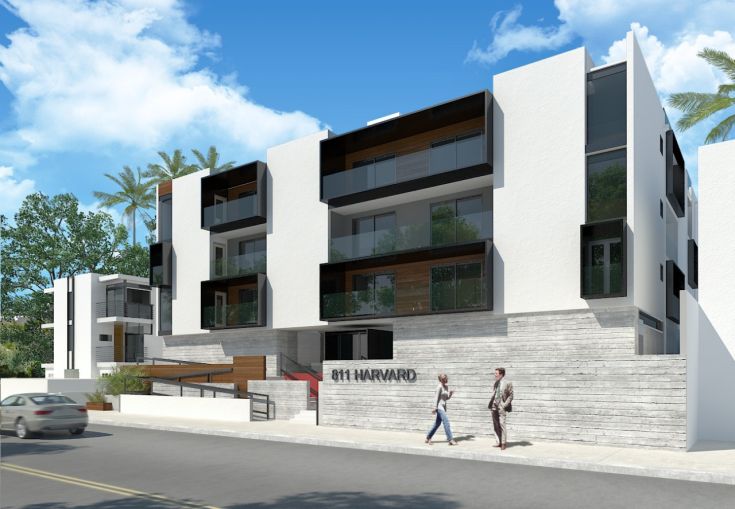 It’s become textbook: Artists move into sketchy, affordable parts of town with good bones that have fallen on tough times and imbue it with hipness. Businesses and wider public interest follow—rents rise and the creatives are then priced out of the neighborhood they helped rehabilitate. In New York, that was Williamsburg, Brooklyn, and Alphabet City and the Lower East Side, both in Manhattan. In Los Angeles, that was parts of Hollywood and the Eastside, including Echo Park and Silverlake. It is a familiar pattern that Leeor Maciborski, the founder of ROM Investments, saw time and time again in his work as a real estate developer. His firm specializes in acquiring, managing and developing multifamily and retail real estate in Hollywood.

“In L.A., as much as people talk about how expensive it is, they talk about the tragedy that the artists who made these communities what they are, are no longer able to afford them,” Maciborski said. “So, our idea was, how do we bring these people back? We could be focused on $750 bunk beds in any discipline, but we decided to focus exclusively on artists because they’re the ones that created the community to begin with and they’re the ones who are usually the first to be priced out because their cash flow stream is more unpredictable than the typical professional.”

The enterprise’s most recent project is Harvard House, a 96-bed community located at 816 North Hobart Boulevard in East Hollywood that opened on August 1, with three more in the works in the Hollywood area to be delivered in the next six to nine months. Projects currently under construction are a 96-bed facility at 803 North Harvard Boulevard, a 82-bed community at 840 North Harvard Boulevard and an 80-bed facility, which also includes a recording studio, office spaces and gym at 1405 North Hudson Avenue. Given the demand, Upstart is turning to ground-up development, with its first larger-scale project, a 40,000-square-foot building at 811 Harvard Boulevard capable of housing 300 residents, which the firm hopes to have permitted by the end of the year and opened by 2020.

Currently, Upstart operates five large communal houses and buildings in the Echo Park, Silver Lake, Hollywood and Beachwood Canyon areas of Los Angeles, with 250 active members and a backlog of 800 members waiting to move in. Residents pay around $700 to $750 per month, which, in addition to a bunk bed or pod bed in a guest room ranging in size from 160 to 300-square-feet, includes access to creative facilities on-site or at affiliate houses, including fully equipped recording studios, photo studios, fitness centers, stage and theaters and coworking space and planned activities, which range from family dinners to workshops to concerts to beach trips. An on-site house manager oversees each property, helps resolve conflicts among tenants—whose average age is 21—and enforces house rules like no parties or noise past 10 p.m. or before 8 a.m. Maciborski said that a comparable unfurnished studio in the area would run around $1,800 per month, not including utilities or gym and other subscriptions which are included in their model.

“It’s a fantastic idea,” said Dana Brody, a senior vice president of capital markets and the lead multifamily broker at JLL in Los Angeles. “It works well in Los Angeles with the entertainment industry and lack of affordable housing.”

Brody pointed to the ongoing popularity of coworking and communal working arrangements, as well as membership communities like the Common, which provides fully furnished apartments for multiple users in the New York market.

Brody also saw the appeal of the concept to millennials who prefer more flexibility in their work and not the burden of buying their furnishings and getting locked into a long-term lease with security deposits and the like. And, for those moving to the city to pursue their dreams, the experience of living alone can be not only cost-prohibitive, but also isolating.

Upstart, she said, with its focus on artists in entertainment-centric Los Angeles, is an especially good fit.

“It fills a need both for affordable housing, but also creates a synergy and the added benefit of living with people with shared interest and goals,” she said, adding that it reminded her of the fortuitous collaboration born in the early 1970s when Jackson Browne’s songwriting practice inspired his downstairs neighbors in a cheap apartment building in Echo Park Glenn Fry and Don Henley of the Eagles, whom they later collaborated with on hits including “Take It Easy.”

Upstart doesn’t conduct credit checks or verify income for applicants. It does, however, provide criminal background checks and review Facebook and Instagram postings as well as potential residents’ creative portfolios to verify that they qualify. The goal is to identify creatives who, he said, “will contribute to our community” and “verify that they are in fact artists…ambitiously working toward success in their field.”

“The community our membership target is creative people who are moving to L.A. or live in L.A. that work in either entertainment or some creative discipline so half of our members are in the music space and then we have actors and cinematographers and screenwriters and a lot of those trades are focused in Hollywood,” he said. “They’re here for maybe a three-month internship at one of the studios or doing one semester at the American Film Institute or something like that. It’s really helpful to be around here and the other is that Hollywood has a lot of development happening right now so it’s a bit easier to secure sites than in other parts of town.”