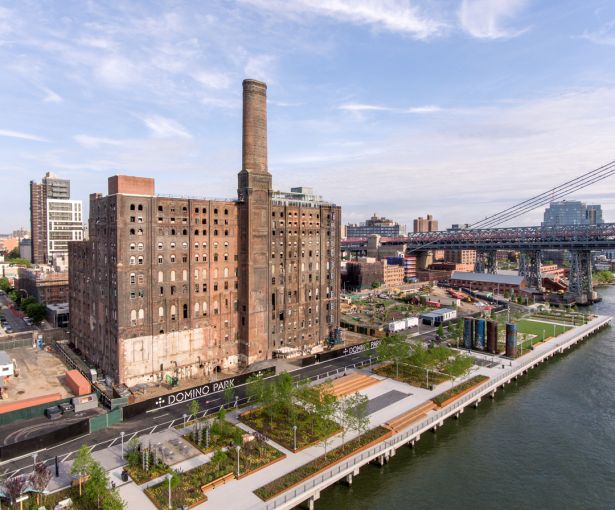 The Domino Sugar Factory in Williamsburg, pictured, is one of many 560 sites that has gone through the city's brownfield cleanup program in the past seven years. Photo: Daniel Levin

Three neighborhoods in Brooklyn and one each in Manhattan and Queens have topped a list of neighborhoods with the most current and former contaminated development sites that have participated in the city’s Voluntary Cleanup Program (VCP), a new report from the NYU Furman Center finds.

Greenpoint/Williamsburg make up a quarter of the contaminated sites in the program citywide, followed by Chelsea (8 percent), Astoria, Queens (8 percent), Bedford-Stuyvesant (7 percent) and Fort Greene/Brooklyn Heights in Brooklyn (6 percent) on a list of 10 neighborhoods that included Greenwich Village and Morrisania in the Bronx.

The real estate think tank’s analysis delved into whether the city’s seven-year-old brownfield cleanup program was effective and examined the effect that it had on neighborhoods with high concentrations of contaminated properties.

More than 85 percent of the remediated sites were located in neighborhoods that were rezoned from 2002 to 2016, the report notes. That’s unsurprising because many areas rezoned under the Bloomberg administration were former industrial havens. In addition, five of the 10 neighborhoods on the most-contaminated-sites list also landed on the Furman Center’s 2016 ranking of gentrifying neighborhoods: Greenpoint/Williamsburg, Astoria, Morrisania, Mott Haven and Bed-Stuy.

Lawyers, developers and environmental consultants told the Furman Center that the cleanup program was efficient, because it was easy to set up site visits with the Office of Environmental Remediation on short notice, and environmental approvals usually cleared the city agency swiftly. More than 560 properties have applied to the program since 2010, with a peak of 153 sites in 2015 that correlates with a post-recession construction boom. As of July 2016, cleanups had been completed at 200 parcels citywide, according to the center’s analysis. A third of those were remediated to “unrestricted” standards, which means that one can build anything there, and 58 percent were cleaned up enough to allow residential development.

The program is well-utilized and relatively easy to navigate (for something that requires developers to complete environmental reviews stretching into the hundreds of pages), but the report does make some suggestions on how it could be improved. The state could extend better liability protections to city environmental cleanups, in order to match the legal protections granted to state brownfield sites. And the city could add certain missing data, like properties that were zoned for commercial or manufacturing uses before 2009, to its database of potentially contaminated properties.