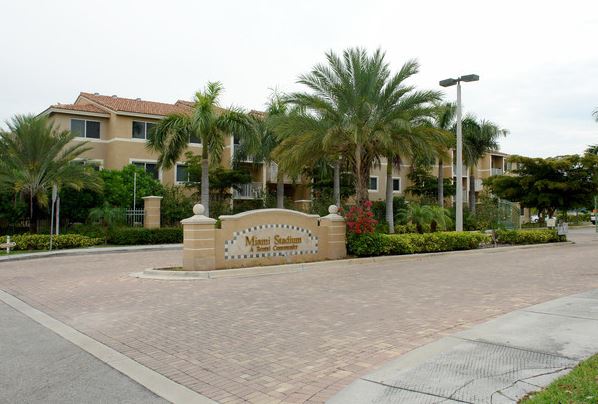 Lewis Swezy, a prolific Miami-area multifamily developer who runs Centennial Management, has landed a $36 million Greystone refinancing for one of his affordable-housing properties, Commercial Observer can exclusively report.

The 35-year, fixed-rate loan is insured by a federal Department of Housing and Urban Development (HUD) program meant to promote rentals that are within reach of low-income earners, according to the lender. It refinances a prior Fannie Mae-backed loan that was originated by a different institution, whose identity Greystone did not disclose.

Greystone’s new debt is lent against Miami Stadium Apartments. The property, at 2625 Northwest 10th Avenue, stands in the city’s Allapattah neighborhood, about three miles north of the downtown business district. Centennial built the 336-unit gated, garden-apartments-style development in 2002 on the site of a historic baseball stadium, constructed in 1949, that, in a spring training match-up, hosted the Los Angeles Dodgers‘ first ever game in 1958. In later years, the stadium also played home to spring training games for the Baltimore Orioles.

That history roused community opposition to the stadium’s demolition in 2001, amplified by its importance to the legacy of Bobby Maduro, a celebrated Cuban baseball executive for whom the ballpark was renamed in 1987. Late last year, Maduro’s and Swezy’s families worked together to install a plaque commemorating the site of the stadium adjacent to the apartment project

Despite its controversial beginnings, the project fills an important need in a tightly stretched market, Eric Rosenstock, an executive at Greystone, told Commercial Observer.

“From my understanding, it’s a highly under-supplied market,” Rosenstock said. “As much [supply] as you put on line, it’s all leased within 90 days.”

The property, which is fully occupied, features one- to three-bedroom apartments ranging from 650 to 1,100 square feet, according to a website that provides Miami-area apartment listings.

New York City-based Greystone recently opened an office in Miami and has worked extensively on Swezy’s projects in the past, both on other refinancings and by providing government-insured construction loans, Rosenstock said. No broker had a role in arranging the debt.

“Greystone’s knowledge of the HUD finance process, as well as the firm’s extensive experience in affordable housing and monitoring the rate environment for opportunities, were all critical to this deal’s success,” Swezy said in a statement. “Working with Eric and his team on this joint execution has been great, and I look forward to continuing to optimize my portfolio with the help of their expertise.”

The financing took advantage of a HUD provision that allows insured loans to be underwritten at their hypothetical market value, even though monthly income is depressed by their commitment to affordable rents.

“Given that this is a fully affordable housing community, HUD enables underwriting the value of the asset using nearby market rate rents, as opposed to the property’s restricted affordable rental income, which was very beneficial on this transaction,” Rosenstock said.