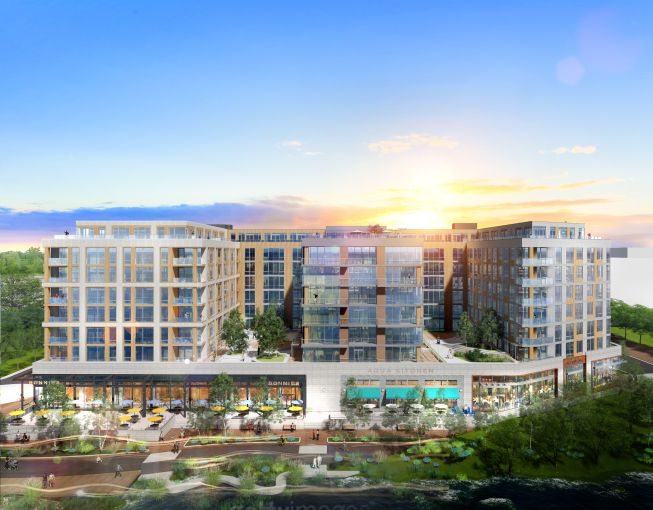 D.C.-based development trio Akridge, Western Development Corporation and Orr Partners are transforming the office building at 2100 Second Street SW to include 481 rental apartments and 59,000 square feet of retail space on the ground floor and cellar levels. The sponsors will convert floors two through eight to multifamily use and add a ninth floor to house additional residential space and amenities.

Spanning an entire block along the Anacostia River waterfront in Washington’s Buzzard Point neighborhood, River Point’s residents will have water views from three sides of the property. The retail component provides space for three waterfront restaurants, a food hall and a pharmacy.

“We’re really excited to move forward with our project in the most exciting new neighborhood of D.C.,” David Orr, the founder and chairman of Orr Partners, told CO via email. “We have incomparable waterfront views and amazing restaurants and retail. This is the new paradigm for living in D.C.”

The developers acquired the property for $43 million in August 2016 and construction is expected to wrap in 2020. Proceeds from Mack’s loan will be used to fund construction costs and also retire previous acquisition debt on the property, provided by Eagle Bank and Greenfield Partners, sources said.

Current plans call for 33 studios, 328 one-bedroom units, and 120 two-bedroom units. Property amenities will include a fitness center with yoga room and a rooftop pool with lounge area.

Historically an industrial area servicing marine industries and naval armed forces, Buzzard Point is now afire with commercial development. River Point is in very good company with the recently-opened Audi Field soccer stadium nearby, and The Wharf and The Yards waterfront live-work-play developments—encompassing 60 acres between them—on either side of the property.

Officials at Mack Real Estate declined to comment. Representatives for Akridge and Western Development did not immediately return a request for comment. Square Mile officials couldn’t immediately be reached.