Mack Lends $503M on Qatari-Owned Hotels in Three US Cities 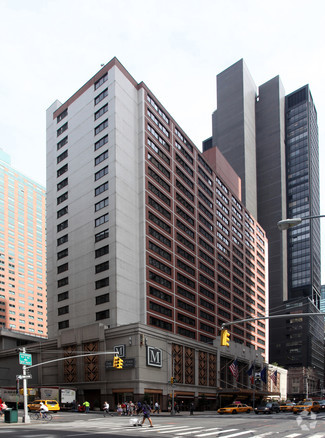 A Qatari investment firm that operates hotels has secured $503 million in debt to refinance three of its U.S. properties, according to an announcement from HFF, which arranged the loans.

The debt, from Mack Real Estate Credit Strategies, is secured by hotels in New York City, Miami and Washington, D.C. that total 1,049 hotel rooms, according to HFF. All three loans carry floating interest rates and mature in four years, with one-year extension options on each.

The Manhattan at Times Square Hotel nabbed the biggest portion of the debt, backing a $290 million mortgage from Mack in the refinancing. The 22-story hotel, at 790 Seventh Avenue between West 51st and West 52nd Streets, today comprises 685 hotel rooms and 9,100 square feet of retail space. The Qatari firm that owns it, Al Rayyan Tourism Investment Company, is finalizing plans to redevelop the site into a 1,500-foot-tall tower that will include 250 hotel rooms and 150 luxury condominium apartments. The Real Deal first reported news of the Manhattan’s refinancing in July.

But HFF’s announcement broadens the scope of the deal to include new debt on two other Al Rayyan properties: the St. Regis Bal Harbour, an upscale hotel Miami Beach, Fla., and the St. Regis Washington D.C., a historic lodging that stands two blocks from the White House. Mack lent $132 million against the Miami property, which includes a total of 216 units split among hotel rooms and condos, and $81 million against the D.C. St. Regis., which has about 200 rooms and more than 10,000 square feet of retail.

Commercial Mortgage Alert covered those financings in prior weeks.

“It was a privilege to work with the team at ARTIC to refinance these extraordinary assets,” Kaufman said in a statement. “We are looking forward to assisting ARTIC in subsequent financing assignments as they continue to effectuate their business plan surrounding the redevelopment of The Manhattan Times Square property.”

Tarek El Sayed, ARTIC’s chief executive, said that the deal represented an endorsement from the credit markets of the qualities of his firm’s U.S. portfolio.

“As one of the leading international hospitality investment companies, our strategy is focused on increasing the value of our hotel portfolio by improving operational efficiency and quality of service while enhancing and developing the properties we acquire to optimize and build new revenue streams,” El Sayed said in prepared remarks. “The refinancing announced today reflects the quality of our asset base and further reduces our financing costs as we execute on that strategy.”

Representatives for Mack did not immediately respond to requests for comment.