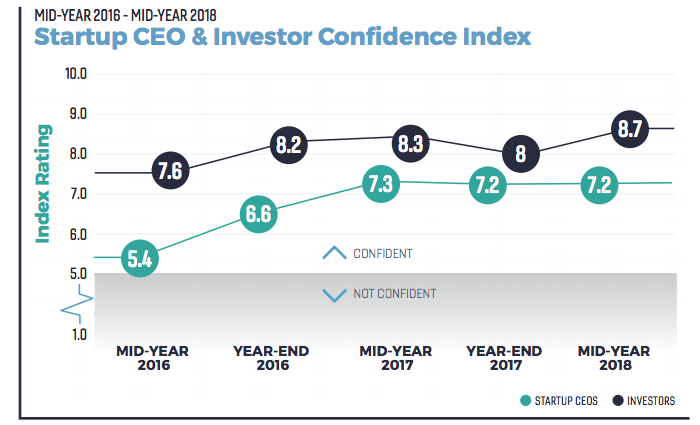 Investor confidence in the proptech sector swelled through the first half of 2018. Credit: MetaProp

Global confidence in the real estate technology sector swelled through the first six months of 2018, according to a new report from proptech advisory and advocacy organization MetaProp, which noted “explosive” investment growth from an increasingly diverse array of investors.

In the mid-year edition of its biannual Global PropTech Confidence Index, which tracks the state of the proptech market, MetaProp noted that its Investors’ Index—which quantifies investor confidence in the sector on a scale of 1 to 10—had reached an “all-time high” of 8.7, up from 8 at the end of 2017.

The firm cited a significant influx in investment dollars in proptech companies in recent years, noting how the $12.6 billion poured into proptech startups in 2017 was up three-fold from the $4.2 billion invested in 2016.

Additionally, the report noted a sizable uptick in the scope of the real estate tech sector globally—with 46 percent of proptech startup CEOs who participated in the survey now headquartered outside of the U.S., compared to 30 percent in the mid-year 2017 survey.

Altogether, the survey paints a rosy picture for a fledgling sector of the real estate industry that has grown at a rapid rate as landlords, investors, brokerages and consumers have sought more efficient, tech-centric ways of doing business.

That, in turn, has led to heightened confidence among both proptech startups and the capital investors they rely on for funding in order to grow. MetaProp’s survey found that 96 percent of investors plan to make at least the same number of proptech investments over the next 12 months (compared to 76 percent a year ago), while 75 percent anticipate more company-level acquisitions to take place over the next year. Respondents also said that 36 percent of proptech investments are exceeding expectations in terms of customer growth (up from 21 percent at the end of 2017).

Among proptech startup respondents, 44 percent reported that their company has been operating for at least three years and 30 percent said their firms now employ more than 20 people (an increase from 18 percent at the end of last year). CEOs also expressed more confidence in their ability to raise capital, with only 17 percent responding that it will be harder to fundraise over the next 12 months—down from the 55 percent at the end of last year.

While noting that the significant year-on-year increase in proptech investment dollars was boosted by a few outlier investments in established companies (such as SoftBank’s massive $4.4 billion investment in coworking giant WeWork last year), MetaProp co-Founder and Managing Director Aaron Block told Commercial Observer that the sector is seeing unprecedented growth in the range and profile of capital sources seeking to pour money into proptech startups—with more institutional-level investors increasing their exposure to real estate technology than ever before.

“We’re having more and more conversations with large asset managers that are starting to think about how they can get involved [in proptech],” Block said. “They have a mandate to preserve capital for their institutions and are seeing that proptech plays a big role [in the real estate market]. Pension funds, sovereign wealth funds, insurance companies, foundations and endowments—we didn’t see these people paying any attention a year ago.”

Block added that, barring any “major macroeconomic earthquakes,” investment in the proptech sector should continue to grow in the coming months and years—describing the market as currently being in the “second or third inning” of its current cycle.

“We probably have 24 to 60 months left of major growth in this space for this particular wave of innovation,” he said. “The sector is maturing similar to fintech and ad-tech, which experienced their wave [of growth].”