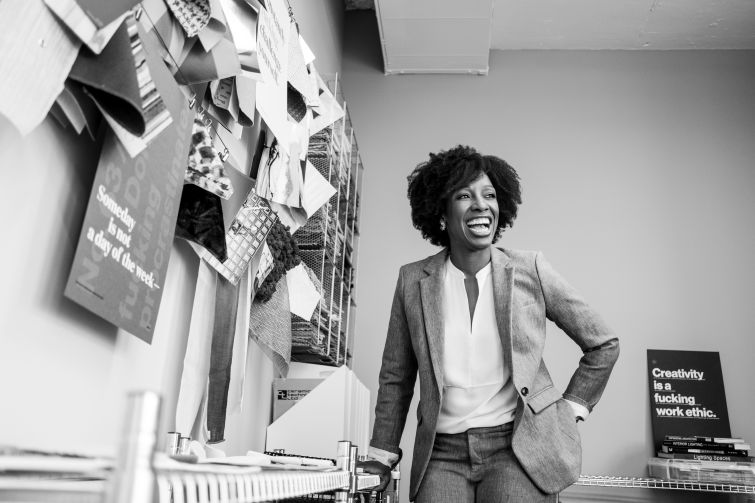 Kia Weatherspoon’s journey to becoming an interior designer began with a bedsheet, a few weeks after September 11, 2001.

The U.S. Air Force veteran was deployed to a military base in the Middle East with about a dozen other women. “It was my first time out of the county ever—I was scared and really just needed a sense of privacy,” Weatherspoon told Commercial Observer. “I was a prideful little 19-year-old girl so I couldn’t cry in front of these women.”

That’s when she took a sheet and hung it from the top of her tent, creating three walls around a cot. “It was the first space I ever created,” said 36-year-old Weatherspoon, who’s now paving the way for “design equity” in residential and commercial real estate. One of her primary goals is  to give Washington D.C.’s low-income residents access to luxurious spaces.

After three years and four deployments, Weatherspoon—who grew up in Portsmouth, Va.—left the military and obtained an interior design degree from Moore College and designed hotel renovations at GF Management in Philadelphia.

After several years in Philly, Weatherspoon moved to Washington “for a boy,” she said. Though that relationship didn’t last, her career continued to bloom at Barbara Hawthorne Interior where she designed luxe residential interiors and Carlyn and Company Interiors and Design where she was first introduced to high-end multi-family design. She earned her master’s degree at the Corcoran School of the Arts and Design.

In 2012, she launched her own firm, Determined By Design. With three full-time employees and a part-time contractor, the firm has transformed over 2,000 units and 65,000 square feet of public spaces.

The firm’s bread and butter is designing multi-unit affordable housing projects, many of which are developed in D.C.’s predominantly African-American communities. What’s missing in designing these projects is people with buy-in who “can make sure the type of home that you live in—whether it’s affordable or supportive housing—looks good,” said Weatherspoon, who lives and operates her business in historic Anacostia.

Her firm’s very first gig was a pro bono project in Southeast where she designed two public spaces in an apartment building for domestic violence survivors and their children. “I walked in there—creative and outgoing—and the first thing these women say to me is, ‘We don’t need what you do,’” Weatherspoon recalled. “It’s like they felt that my presence, my craft and my skill was irrelevant to how they needed to heal and move forward in their lives. But what I knew was the power that well-designed spaces could create for these women.”

So she changed her approach and fully integrated them into the project. “I treated them like clients, giving them a say in how they wanted their space to feel because they’ve never had that before,” she said. This resulted in two beautiful spaces—an adult room designed as a tropical haven centered around waterfalls and a vibrant children’s room accented with rainbows.

“When I finished the project, a woman came up to me and said ‘Ms. Kia, when I walked into this room, I realized change was possible for me,’” she said. And at that point, Weatherspoon realized that the people who need access to well-designed spaces the most, don’t even know they need it or have advocates for it. “And that’s our job,” she said.

With each project since, she’s continued to create narratives that speak to tenants. “Kia designs with a key question in mind: how will this space make residents feel?” said Buwa Binitie, the principal developer at Dantes Partners, which gave Determined By Design its first paid job. Co-developed with The Menkiti Group, Girard Street Senior Apartments is a 25-unit community at 1545 Girard Street NE in Brookland with over 1,800 square feet of amenity space that Weatherspoon designed.

“She designs with context, making sure the spaces aren’t just beautiful, but are also relevant,” Binitie continued. “They meet the needs of the program and the needs identified by residents, but they go beyond that. Kia considers legacy and culture, starting with primary research and discovery. She then creates spaces that don’t just allow for community, they actively encourage it.”

At Bruce Monroe, a 189-unit mixed-income multi-family building on Georgia Avenue NW, Weatherspoon pulled inspiration from D.C.’s creative community. “She introduced a large pattern of textiles and reflective surfaces, inspired by the work of a D.C.-based artist, to create depth, variety and a sense of light in the entrance of the building,” said Aspasia Xypolia, a project manager for developer The Community Builders.

Without compromising her design aesthetic, Weatherspoon learned to cut costs for developers, which is vital to selling herself to firms who don’t believe that an interior designer is needed. “We ended up having seven percent more architectural finishes on the Girard Street project—decorative lighting, accent wall coverings, feature walls—but cost for cost, I came in four percent under budget,” she said. “So for a developer, I look like a hero because I saved them money and we really elevated what that space looked like.”

Weatherspoon also helps small business owners, particularly those in neighborhoods on the brink of gentrification, create value in their spaces as more established and modern businesses enter the fold. “It’s not enough to just have the brick and mortar, you have to create an experience for the end user in that brick and mortar,” she said.

In 2017, she received the Emerging Leader award from HAND Housing and was named one of 18 rising U.S. hotel designers by Boutique Design magazine. Her notoriety led her to design a boutique coffee shop and bookstore for CNN correspondent Marc Lamont Hill later that year.

In 2018, she made the Washington Business Journal’s coveted 40 Under 40 list. “Recognition is good,” she said, adding however that she “doesn’t get caught up in the hype.”

After meeting the owner of development firm CA Harrison Company in 2017, she was hired to design a 131-key Cambria Hotel outside of Richmond, Va. that’s slated for completion in 2019.

She’s also working on another Dantes Partners project, Capitol Vista Apartments—a 9,648 square-foot development that’s under construction at H and North Capitol Streets NW. It’s slated to have 104 affordable apartments and 3,200 square feet of ground-floor retail. Weatherspoon is planning and designing the entire amenities package, as well as the corridors and base units.

The Menkiti Group, co-developer of the Girard Street project, is also a repeat client. In 2017, Weatherspoon “skillfully executed a sleek, modern interior design” for one of the firm’s brokerage offices at 4646 40th Street NW in Tenleytown, said Mark Rengel, a vice president at the firm.

The developer has included Determined By Design in its proposal for MLK Gateway, a massive development that will bring will bring 50,000 square feet of new commercial space to the under-resourced Anacostia neighborhood. “We have proposed to include Kia as a design partner on the MLK Gateway project based on her outstanding track record and for the energy and passion she brings to every endeavor,” Rengel said. “Kia is also uniquely positioned to positively impact her own neighborhood with the MLK Gateway project, as a resident of Anacostia who lives just down the street from the project site.”

If selected for the project, Weatherspoon will design for the anchor tenant tech company Enlightened.

As a minority business owner, it’s not lost on Weatherspoon that she also personifies equity. “Here I am, a young black woman, in a career field that people don’t really know is an option—they think it is a commercialized industry that you see on HGTV,” she said. “I’m trying to say that this is a career field where you can strive and be successful.”