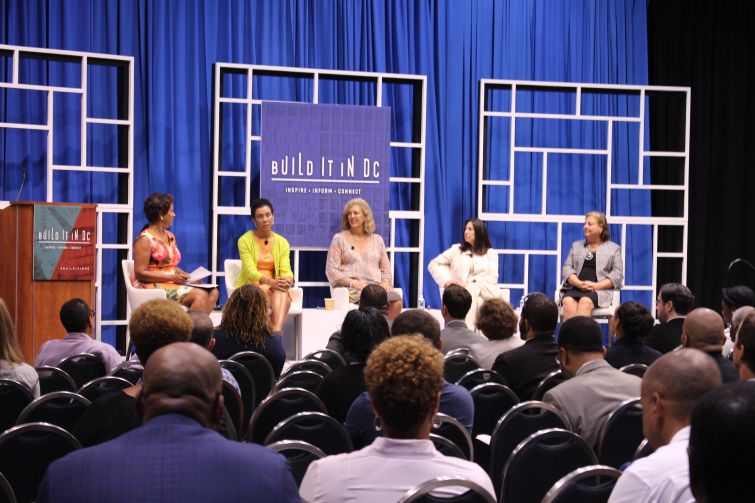 Washington, D.C.’s male-dominated commercial real estate industry is dotted with powerful women who are behind some of the city’s most transformative projects. They are also keen on which neighborhoods they intend to plant their flags next.

Jami Passer, the CIO of Edens and the developer behind food and retail hub Union Market, naturally touts the 45-acre Union Market District as a place to watch. “Union Market is a place that inspires innovation in the heart of the nation’s capital,” Passer told Commercial Observer over email.

Since Edens renovated and opened the 47,000-square-foot Union Market in 2012, the surrounding area—a budding district—has expanded to include restaurants such as Masseria, the third location of homegrown Politics & Prose Bookstore and outposts of Trader Joe’s grocery store and Oakland, Calif.-based Blue Bottle Coffee.

In the past six years, the area has seen 54 new businesses that collectively employ 1,200 people, Passer said, adding that half of the companies are minority- and women-owned. She called it a neighborhood that “brings together a creative and diverse community—home to incubators, artists, entrepreneurs and makers who are influencing and driving the Washington, D.C., economy.”

In January, The Washington Business Journal reported “what may be the single largest sale ever in the Union Market area.” An affiliate of San Francisco-based Carmel Partners and McLean-based Kettler purchased a 98,000-square-foot warehouse for $56 million, as part of Kettler’s 1.3-million-square-foot Market Terminal project.

D.C.-based Altus Realty announced in July the purchase of a vacant property that it plans to develop into a hotel or a multifamily development with retail amenities, noting the proximity to the Union Market area as a reason for the $5 million acquisition, according to Washington Business Journal.

On July 26, Passer sat on a panel with Vicki Davis and Barbara Mullenex, where they were first asked to identify neighborhoods that the crowded audience should keep their eyes on. It was the D.C. Department of Consumer and Regulatory Affairs and Washington DC Economic Partnership’s first-ever all-women real estate development panel at the fourth annual Build It In DC Conference.

Davis, a managing partner at Urban Atlantic, said that the upper Georgia Avenue corridor is the place to watch.

The area includes the Parks at Walter Reed, which is being co-developed by Urban Atlantic. With a full build out slated for 2030, it will deliver 3 million square feet of mixed-use developments on the former Walter Reed medical center’s campus, including 2,100 residences, 175 square feet of retail, 300,000 square feet of office and a 150-key hotel and a conference center, according to the firm’s website.

The development “is a tremendous opportunity to help the overall corridor,” which has few existing retail amenities, Davis told CO.

Mullenex, the managing principal of Perkins Eastman’s D.C. office—the lead architect behind the new Wharf development in Southwest—points to the Armed Forces Retirement Home campus in Northeast as prime land for redevelopment. The McMillan Reservoir, Children’s Hospital and Washington Hospital Center are in the property’s immediate vicinity, Mullenex pointed out. Catholic University and Howard University are about a mile away.

“And in the middle you have this big donut,” said Mullenex, referring to the 80-acre former veterans campus for which the General Services Administration released a request for proposals in June. The site’s redevelopment could encompass residences, offices, medical facilities, retail and a hotel.

“It’s a big, high elevation site that could change that whole upper Northeast part of Washington in a very positive way,” said Mullenex, who noted that Perkins Eastman is part of a development team that put in a proposal for the site.

She described Carver Langston as being “geographically isolated” in Northeast between Benning Road and Maryland Avenue Corridors. “There’s a lot in that area that you look at and think something great needs to happen there,” she said.

Mullenex said she could visualize the repurpose of a cluster of shuttered D.C. public schools that sit atop a hill in the neighborhood, the revitalization of nearby Hechinger that houses retailers including Dollar Tree and Ross Dress For Less, and the redevelopment of the Langston Golf Course.

Pamela Bundy, the president and CEO of Bundy Development Corporation, who also sat on the panel, noted Deanwood as a neighborhood to watch. She did not return CO’s request for comment.

Mullenex said the neighborhood’s proximity to Metrorail and the Kenilworth Aquatic Gardens, plus its direct route to the H Street corridor and “really nice residential fabric” make it an appealing part of the city for development.

Michelin-acclaimed restaurant Ivy City Smokehouse is planning to open a second location at the Strand Theater development in Deanwood, which is often referred to as a food desert, as CO reported in April.

Mullenex also sees projects that could stretch into Prince George’s County, Md. since Eastern Avenue NE is the dividing line between Deanwood and the Old Line State.