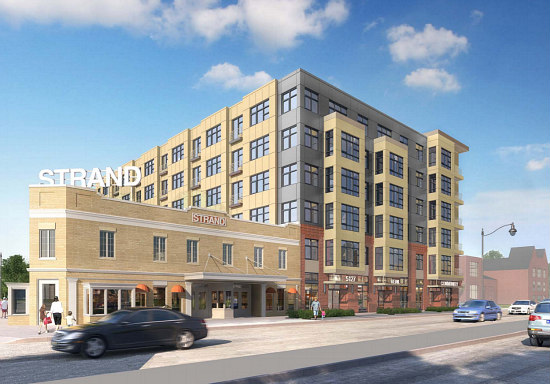 Ivy City Smokehouse is planning to open a second location in the Deanwood neighborhood of Washington, D.C. Owners of the Michelin-acclaimed restaurant and event space signed a letter of intent to bring an outpost to the Strand Theater development at 5131 Nannie Helen Burroughs Avenue NE, according to Urban Turf, which first reported news of the deal.

The restaurant—which has an outpost at 1356 Okie Street NE—will occupy a 5,600-square-foot space, as well 1,200 square feet on the mezzanine level, through a 10-year sublease as per Urban Turf. The PGN Architects-designed buildout is slated to begin in January 2020.

Local developer The Warrenton Group controls the site via a 99-year ground lease with the District government. As part of the deal, Warrenton promised to develop the vacant theater (the city bought it for $230,000 in 2006 after foreclosure). Additional details about the terms of the sublease weren’t immediately available.

Warren Williams, the CEO of Warrenton, and Smokehouse representatives did not respond to Commercial Observer’s request for comment.

Built in 1928, the Strand was the first movie theater for black residents in the District. It’s been vacant for over 50 years. There have been multiple attempts to revive the space over the past decade, without success. Warrenton has plans to turn The Strand into a mixed-use project with retail space and a community facility. The firm is also developing a six-story apartment building on an adjacent lot.

As housing costs begin to rise in the underserved neighborhood, the city has been making other residential investments as Deanwood residents advocate for more food and entertainment amenities that are scarce east of the Anacostia River.