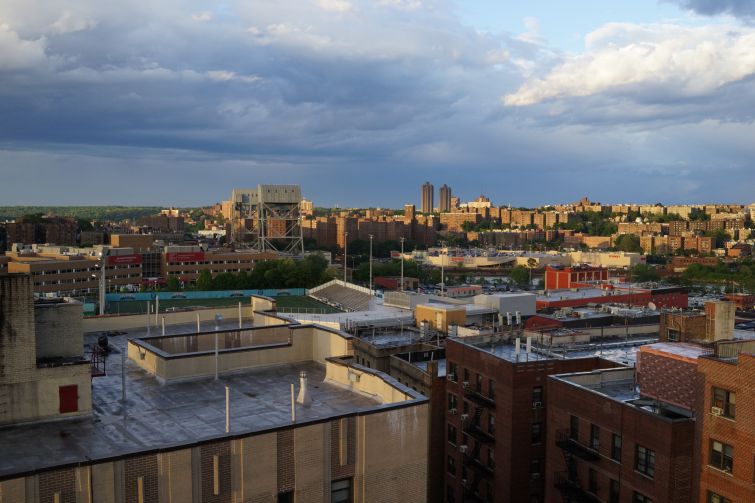 Whenever the City Council holds a final vote on a major neighborhood rezoning, there’s often theatrics from protesters and cops hauling people out of the upper level of the council chambers. Today was no different: activists fighting against the rezoning planned for 59 blocks of Inwood in upper Manhattan began tossing Monopoly money from the balcony and yelling, interrupting the hearing.

“This is a monopoly!” they hollered. “Alto Manhattan no se vende! [Upper Manhattan is not for sale!]”

After Council Speaker Corey Johnson warned the protesters to stop, council security officials called the New York Police Department, who escorted the protesters out of the building in plastic handcuffs. Then the meeting went on as planned, and the council ultimately voted through the controversial plan with a vote of 43-1, with one councilmember abstaining. Inwood is Mayor Bill de Blasio’s sixth neighborhood rezoning, after Far Rockaway in Queens, Jerome Avenue in the Bronx, East New York in Brooklyn, East Harlem and East Midtown.

The plan is expected to generate at least 3,900 new apartments (1,600 of which would be below market rate) over the next 15 years, largely in the swath of land east of 10th Avenue, where the city currently allows only industrial and auto-related development. The city has also committed to preserving 2,500 rent-regulated homes in Inwood and Washington Heights, using city housing programs and funding from the Department of Housing Preservation and Development.

Councilman Ydanis Rodriguez, who represents Inwood and Washington Heights, negotiated $200 million in city commitments for affordable housing, infrastructure upgrades and new green space throughout the neighborhood. The promised benefits—spelled out in a press release from the mayor’s office—include $50 million for science, technology, engineering and math programs at local high schools, a new Inwood library at the base of a 14-story building, an 175-unit affordable residential project, street and sewer improvements and the building of two new waterfront parks.

Rodriguez, who helped negotiate the benefits for the new zoning, has received plenty of backlash from local activists. Members of a group called Northern Manhattan Is Not For Sale camped out overnight in the council member’s office last week to express their displeasure with a modified version of the zoning plan that was approved by a council subcommittee last week. Rodriguez said he even received a death threat over the rezoning, which he reported to the police.

“I heard loud and clear that the rezoning was too broad and could hurt the character of the neighborhood, and for that reason, we decided to take the commercial U out of the rezoning,” Rodriguez said during the hearing, referring to a dense, mixed-use zoning planned for the area between Dyckman and West 207th Streets, bordered by Broadway. “Our district and hard-working families have thrived for decades despite the neglect and lack of investment from various administrations. Fewer than 1,000 affordable units have been built in the last 30 years. With this plan, we will create, preserve and protect over 5,000 units, including the development of 2,600 units on public and private sites.”

The plan will require developers to set aside at least a quarter of the apartments they build as permanently affordable housing under the city’s Mandatory Inclusionary Housing program. And all new projects built along the Harlem River waterfront must include open space, as part of the city’s plan to transform 10 acres of parking lots into a publicly accessible waterfront. The zoning also calls for a form of commercial rent control: builders who receive city financing for their developments must give retail tenants long-term leases with limited rent increases.

“The approval of the Inwood neighborhood rezoning means a fairer, stronger future for a community that has experienced decades of disinvestment. It means affordability, security and opportunity for residents and new immigrants alike,” de Blasio said in a statement. “I thank Councilmember Rodriguez for his partnership in creating a bold plan that will benefit the community for generations to come. I also thank Speaker Johnson, Land Use Committee Chair [Rafael] Salamanca and the entire council for joining us in our fight for affordable housing and strong neighborhoods.”