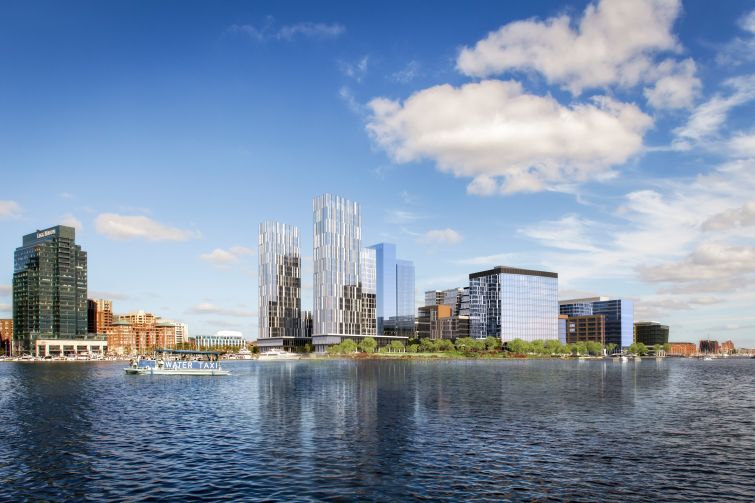 A London-based digital marketing agency has signed a lease for 34,645 square feet at Beatty Development Group’s mixed-use Wills Wharf tower that is under construction at the Harbor Point development in Baltimore, M.D., according to a press release from Savills Studley, which represented Jellyfish in the deal.

Jellyfish is the first tenant to lease space in the building—the firm’s 140 Baltimore employees, relocating from 250 South President Street, will take up the entire sixth floor.

“This continues to be an extremely exciting time for Jellyfish as they experience tremendous growth internationally,” said Savills Studley’s Ryan Miller, who represented the tenant alongside George Santos, in a prepared statement. The firm also has U.S. offices in New York, N.Y., San Francisco, Calif. and Reston, V.A.

Located on the waterfront of Baltimore’s Inner Harbor, the $117 million 12-story Wills Wharf will offer more than 333,000 square feet of office space, retail space, and a 156-room Canopy by Hilton hotel when it’s completed in 2019. A Savills Studley spokesman would not disclose the lease terms.

The tower is the fourth building in Beatty’s 27-acre Harbor Point development that’s expected to be fully finished in 2022. “Harbor Point provides a perfect blend of space, technology and amenities that can foster growing companies like Jellyfish for years to come,” said the firm’s president, Michael Beatty, in a prepared statement.

Antony Gross, Rob Freeman and Peter Jackson of JLL represented Beatty in the transaction. “Jellyfish’s move to Wills Wharf demonstrates the confidence their global, forward-thinking company has in Harbor Point. We’re excited to welcome them as the first official tenant and look forward to many more like them,” Gross told Commercial Observer.

In 2015, Jellyfish’s global headquarters relocated to The Shard, “awe-inspiring tower in the heart of London,” Rob Pierre, the CEO of Jellyfish, said in the press release. “Calling that trophy building home allowed us to create an award-winning environment for clients and provided a workspace where our employees enjoyed being a part of each and every day. We wanted to replicate that in Baltimore and believe we’ve found it at Harbor Point.”