After Tenants Pull Out, City Files Plans for Building at Spofford in the Bronx 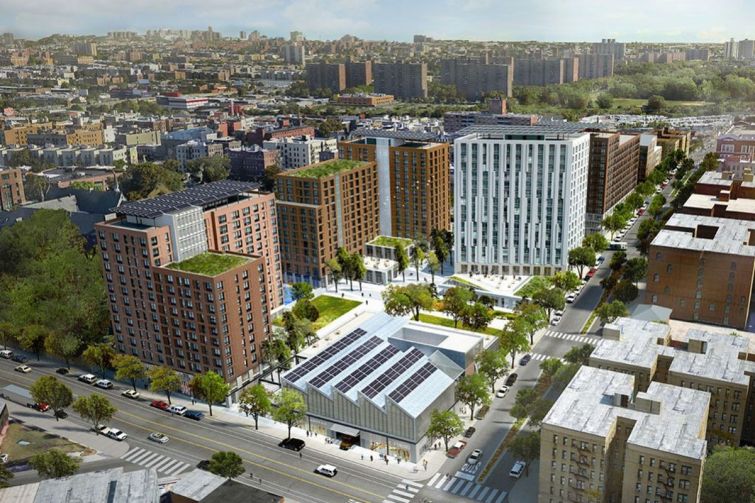 A rendering of The Peninsula, the planned redevelopment of the former Spofford Juvenile Detention Center in the South Bronx. Image: EDC

Despite losing two of the building’s tenants, the city has filed plans for the commercial and light industrial portion of the Spofford jail redevelopment in the Hunts Point section of the South Bronx.

The new building application calls for a three-story, 49,000-square-foot building at 1201 Spofford Avenue, which would be divided between 26,114 square feet of manufacturing and 22,947 square feet of commercial space. The filing with the New York City Department of Buildings includes retail on the ground floor and a mix of film production facilities and other kinds of industrial uses on the two upper floors. WXY Architecture, which is master planning the project known as The Peninsula with Body Lawson Associates, filed the plans on Monday.

However, two of the four tenants that had signed letters of intent to occupy the building recently pulled out, leaving the city Economic Development Corporation and the developers searching for new tenants, according to a spokeswoman for agency. Lightbox NY Film Studio and Hunts Point Brewing, which were slated to fill 17,000 square feet and 8,600 square feet in the building, respectively, have both withdrawn from their agreements with the city.

Two other tenants who committed to the building—LL Forno Bakery, which will take 9,500 square feet, and Bascom Catering, which will have 5,700 square feet—are still on board. EDC said it’s working with the trio of developers selected by the city in 2016 for the Spofford campus—Gilbane Development Company, Hudson Companies and the Mutual Housing Association of New York—to find new tenants. The Real Deal was the first to note that Lightbox had withdrawn from the project.

Spofford opened in 1957 as a jail for New York City’s youth offenders and was shuttered in 2011 after years of public outcry over the violence and terrible conditions there, according to The New York Post. The detention center on Spofford Avenue between Tiffany and Casanova Streets held 100 detaineers under 15 years of age who were awaiting trial or placement in a different jail. The City Council approved the rezoning and redevelopment of the five-acre jail in March.

As part of the first phase of the former jail’s transformation into a mixed-use campus, the commercial building on Spofford Avenue will join a 14-story, 183-unit residential building with community and retail space. Construction on the first phase is expected to wrap in 2021, phase two is supposed to be complete in 2022, and the entire five building project (four residential and one industrial) is scheduled to finish in 2024.