Under Construction: The Old Tammany Hall Gets New Life as 44 Union Square 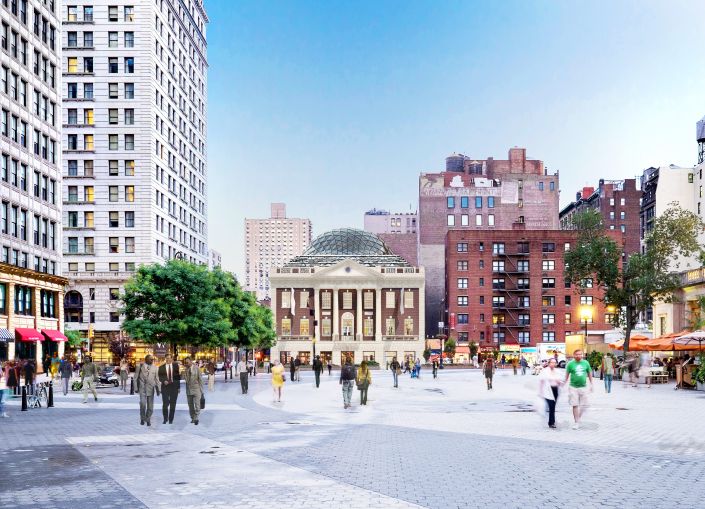 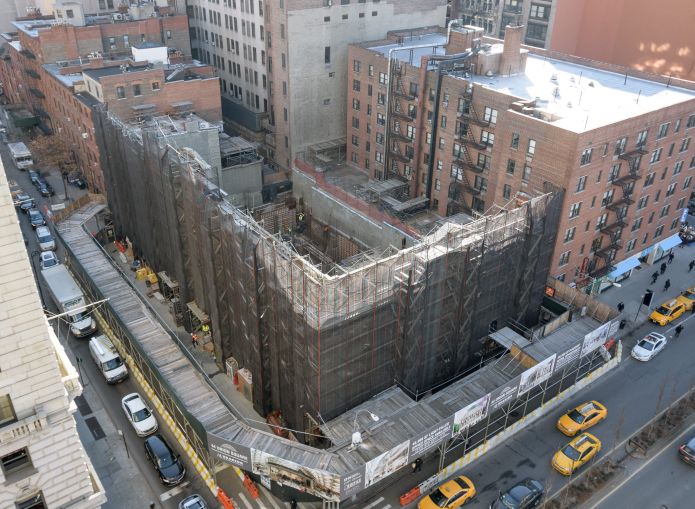 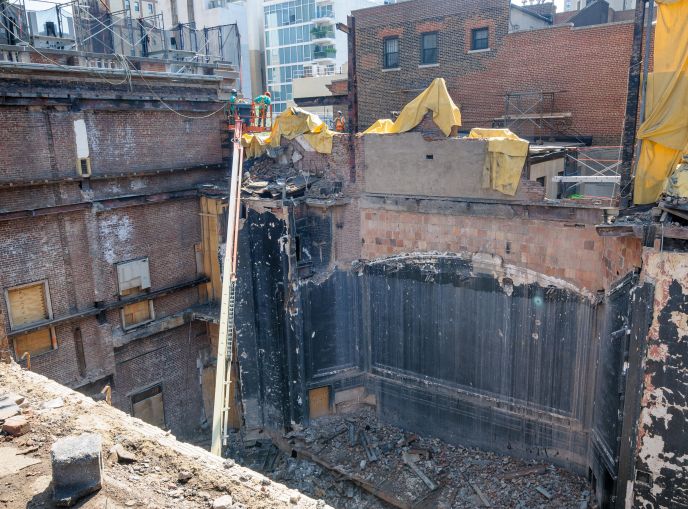 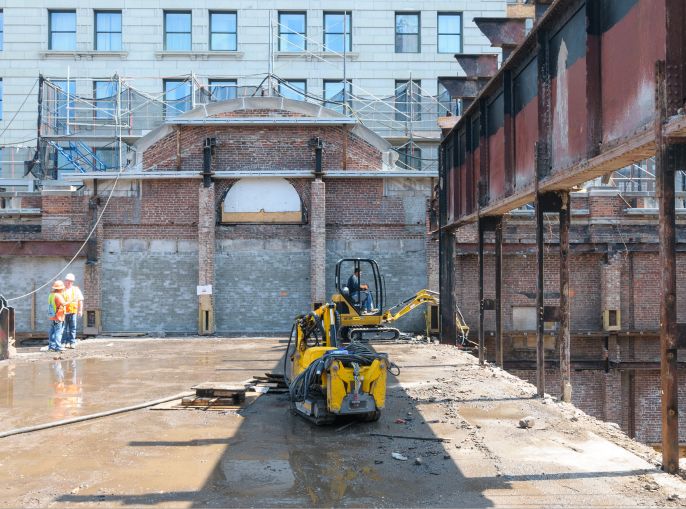 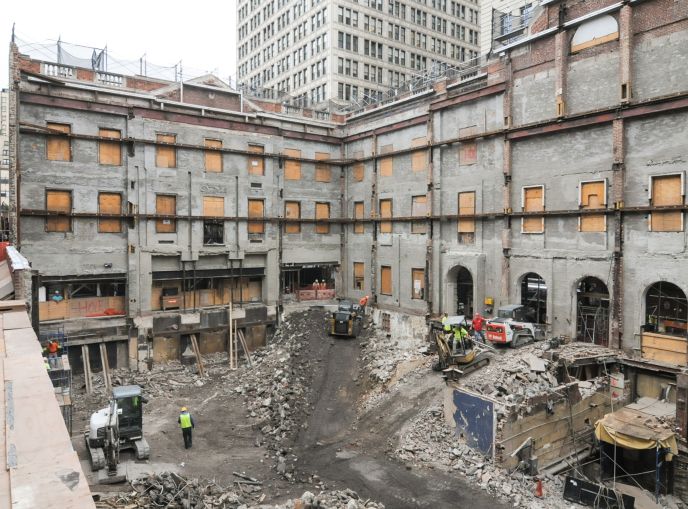 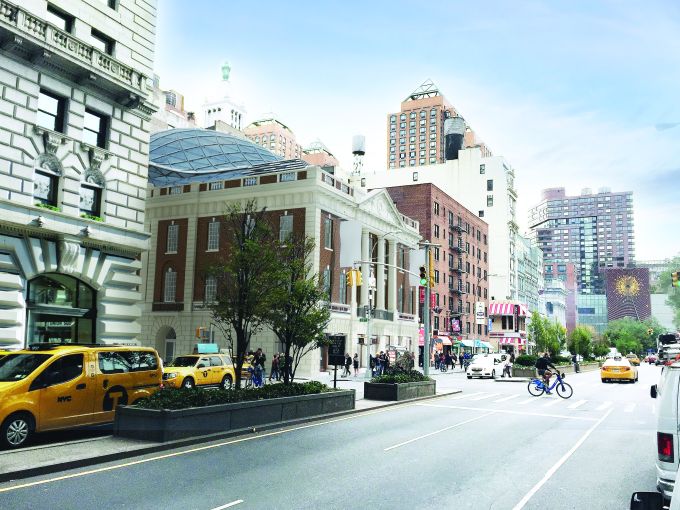 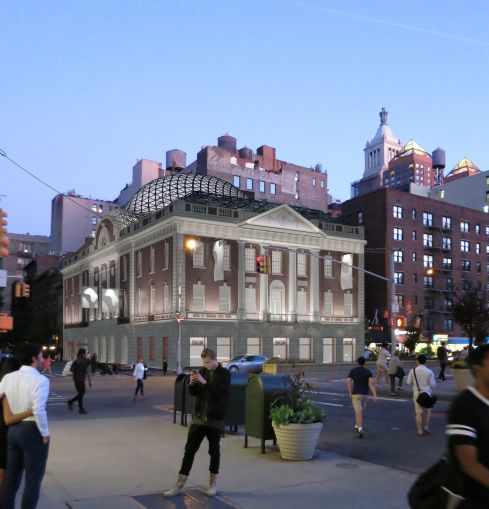 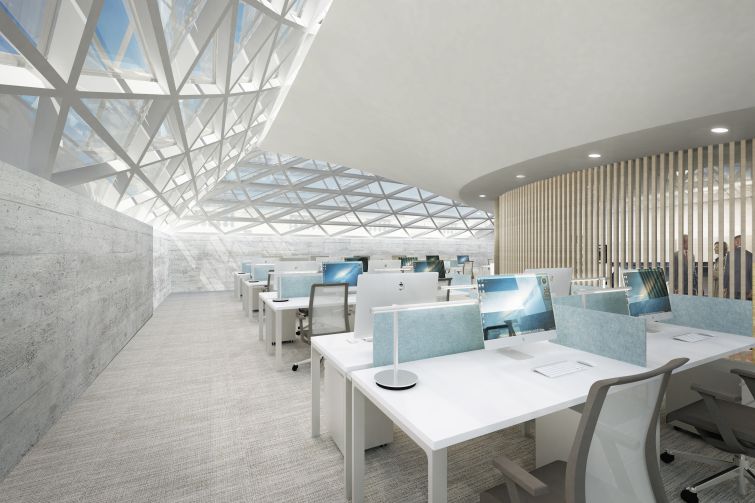 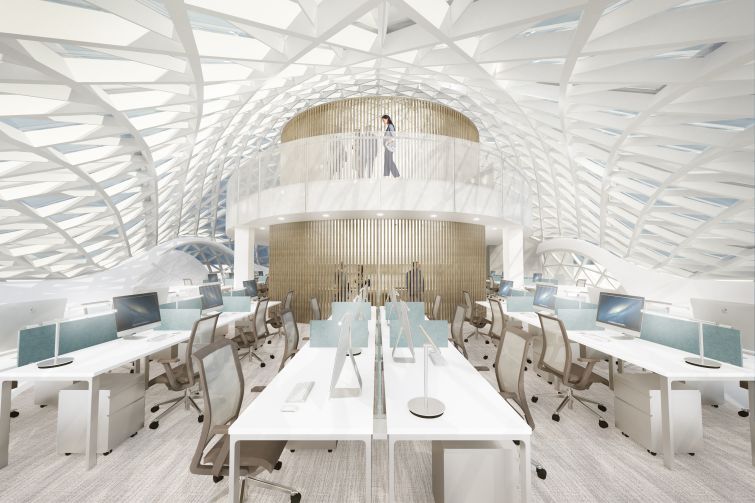 Standing at the corner of East 17th Street and overlooking Union Square Park, 44 Union Square East was once home to one of the most powerful institutions in New York—Tammany Hall, the political machine that dominated city and state politics across three different centuries.

After the notoriously corrupt organization’s influence waned in the middle of the 20th century and Tammany Hall sold the building in the 1940s, it served a number of purposes, housing the International Ladies’ Garment Workers’ Union for a period and most recently functioning as an off-Broadway theater.

Now, the 1929 structure is entering its latest incarnation—that of a six-story, 70,000-square-foot boutique office building catering to the contemporary tenants who have flocked to the Midtown South market en masse this decade. To get there it is undergoing an ambitious makeover, helmed by construction firm CNY Group and designed by BKSK Architects, that entails the construction of an entirely new superstructure behind its historic, red brick and limestone facade, which was landmarked in 2013.

“In this case, the existing building’s configuration [as a theater] wasn’t conducive to maximizing the value of the [commercial office and retail] project,” CNY Founding Principal and President Ken Colao told Commercial Observer.

So CNY and BKSK—alongside fee developer Edifice Real Estate Partners, which is handling the project on behalf of the landlord, Los Angeles-based theater operator Reading International—decided to “stabilize and brace” the historic exterior, Colao said, in order to demolish the existing steel building behind it and put up a new concrete structure featuring a layout that would make it viable as a modern office building.

“The challenge was, how do we stabilize the facade and preserve the landmark, and drop the building behind it?” Colao noted. After studying the matter extensively, CNY decided to erect a series of temporary “towers” along the perimeter of the building to support the facade while reconstructing the superstructure.

With the last slab of concrete having been poured and the superstructure now complete, the builders are now turning their attention to the project’s gleaming cherry-on-top: a glass-and-steel dome roof manufactured by Germany-based facade construction firm Gartner and due to arrive on site in late August.

Todd Poisson, a partner at BKSK, said that the inspiration for the dome came from looking back at the history of Tammany Hall and realizing that the organization—as well as a wider network of “Tammany Societies” established across the Northeast in the late 18th century—was named after Tamanend, a Native American chief in the Lenape nation. Given the significance of the turtle and the symbolism of the turtle shell within Lenape mythology, the shell-like design of the dome is a way of paying homage to the building’s historical significance beyond the “greed and corruption and graft” that became synonymous with the New York political machine that took the Tammany name, Poisson said.

“[The developers] said they wanted to distance themselves from the [Tammany] name—but maybe we embrace it, and look at it in a way nobody expects,” Poisson added. “That was the genesis of the turtle shell rising from the building to give it a new branding and a new symbol.”

With forward-thinking tech and media tenants having driven Midtown South’s transformation into the city’s most in-demand office market, the hope is that the newly dubbed 44 Union Square’s shiny new profile proves a draw to companies willing to pay more for a unique, attractive place to do business.

“We recognize that younger and newer companies are attracting employees who have different considerations for the type of space they want to work in, and that a lot of older office buildings aren’t amenable to that,” said Michael Buckley, a managing principal at Edifice. He added that the developers hope to secure above-market office rents at 44 Union Square given that they’re “bringing something differentiated” from much of the comparable space in the market—particularly the upper floors of the building that are encased by the glass dome.

All in all, the project—which will also feature a Landmarks Preservation Commission-approved rehabilitation of the facade—is set for completion in the first quarter of next year. While CNY has worked on more than 45 projects involving the restoration of landmarked New York City properties, Colao said that “this one was unique.”

“It’s preserving past elements of the building and combining it with something new and contemporary,” he said. “It’s a good thing, because by adding in contemporary components and not being constrained by existing structural layouts, you’re able to extend the useful life of a building. As opposed to making it a museum, it’s brought it to life.”