The Secret of a Steakhouse Thriving in NYC? Forget the Steak. 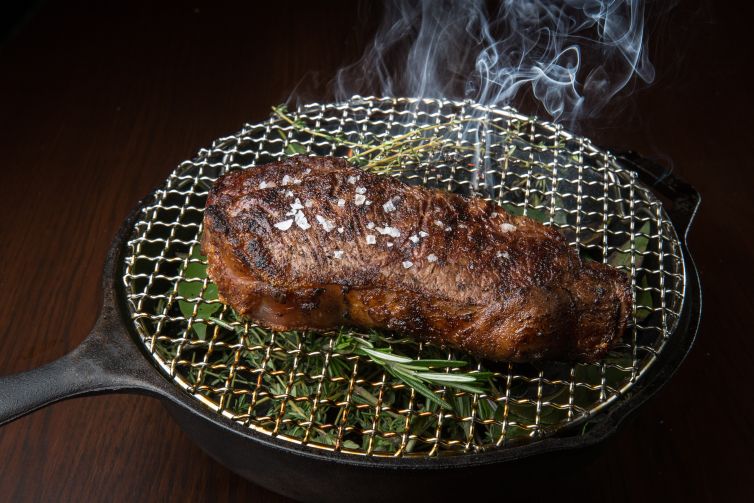 MEATY OFFERINGS: While steakhouses are obviously all about the steak, there has been increasing pressure for them to beef up the non-meat options. Photo: Arpi Pap Studio for Butcher & Banker

It used to be, well, rare that you could enjoy dining at a New York City steakhouse if you didn’t eat steak.

Yes, there was the requisite iceberg wedge; the vegetables drenched in heavy sauce; the varieties of hash browned, fried or baked potato; and the perfunctory serving of tasteless salmon. But the real focus was on the enormous T-bones and porterhouses.

Today, few steakhouses that hope to compete in the current restaurant environment where the knives are always drawn can bank on just the steak.

In the last few years, and even more so of late, in a New York dining scene where restaurants fail daily, chophouses have taken notice of steak- and carbohydrate-averse folks, beefing up the chicken, fish and vegetable offerings and serving human-sized portions.

“The hottest trend in the restaurant business is plant-based products,” said Stephen Zagor, a lead instructor at the Institute of Culinary Education in New York City. And apparently that extends to the steakhouse.

The steakhouses that have thrived across demographics have made adjustments to their model with a greater emphasis on the steak accompaniments and starter dishes, Zagor told Commercial Observer.

At Butcher & Banker, which opened in the former Manufacturers Hanover Trust bank vault beneath the New Yorker Hotel last fall, it was imperative to hire a more holistic chef.

“We said to [Chef Scott Campbell], ‘We’re hiring you not because you know how to grill a steak or simply grill a piece of salmon and throw it on a plate, which is what most steakhouses do,’ ” said restaurant consultant Michael Whiteman of Baum + Whiteman, who consulted on the restaurant concept, name, interior design and menu. “ ‘We want you to make sauces. We want you to pay particular attention to vegetables. We’re not interested in putting a steamed piece of broccoli on a plate. If we’re going to do vegetables, we’re going to treat them like we’re feeding vegetarians who are hungry.’ ”

Whiteman said the menu was literally and figuratively designed for the one person in a party of four diners that doesn’t want steak. (Steaks can be found at the bottom of the menu.)

Retail adviser Karma McDermott, a partner at Hospitality House, said that if she wants “a real steakhouse meal,” she goes to legends like Keens Steakhouse or Peter Luger Steak House—but if she is looking for something lighter she prefers American Cut and Quality Eats because of their vegetables and sides. At Quality Eats, she noted, “The sides are just as important as the steaks.”

Beyond the changes in food preferences, steakhouse owners have had to contend with a number of other consumer behavior patterns: the power lunch—with it’s long time commitment and heavy offerings—going by the wayside, steakhouses skewing older, millennials wanting Instagrammable restaurant experiences and, in general, people preferring not to spend a gagillion dollars on a meal.

“I think to myself, If I’m going to go to American Cut, I’m going to Instagram the carrot-glazed carrots, not the steak,” McDermott said.

Willie Degel, the owner and CEO of Uncle Jack’s steakhouse restaurants, is serving his various constituents by converting Uncle Jack’s at 44 West 56th Street between Fifth Avenue and Avenue of the Americas into Jack’s Tavern. He posted on his Facebook page that he is “taking the best of the steakhouse and adding in some great new apps, burgers, sandwiches, sides, entrees.”

While he told CO Jack’s Tavern will “still have three signature steaks,” the menu will be more affordable, the décor and staff attire will be more casual and overall the restaurant will be “less intimidating.”

Even at his Uncle Jack’s Steakhouse at 440 Ninth Avenue between West 34th and West 35th Streets and in Bayside, Queens, he has been tweaking the menu with smaller portions and the addition of a burger. “Everyone’s trying to adapt,” Degel said.

Strategies include both forgoing lunch, which is what Butcher & Banker is doing, and embracing it but in a different way: Empire Steak House—with New York City locations at 151 East 50th Street and 237 West 54th Street—launched a prix-fixe lunch this week to simplify and speed up the ordering process as well as decrease the portion size, according to Jack Sinanaj, the executive chef and co-owner. Sinanaj said he is calling it a “quick lunch.”

While no one with whom CO spoke said the venerable chophouses like Peter Luger, Keens, Sparks and the Palm are going anywhere, the steakhouse market has been crowded and some have had to close their doors. Recently, Maxwell’s Chophouse, opened in November 2016, closed after a year and half at 1184 Broadway at West 28th Street and New York Yankees Steakhouse Manhattan is closing at 7 West 51st Street between Fifth Avenue and Avenue of the Americas, on Aug. 26 after less than five years.

“Who are they?” one source said on hearing the aforementioned names. “I question the quality of the ones that closed.”

“Old-school steakhouses that stay true to their history will always have their place,” said restaurant broker Spencer H. Levy, a senior vice president at CBRE. Zagor noted that the old steakhouses endure because they have achieved a celebrity status and are tourist destinations.

“I think steakhouses got overdone—pun intended,” said Peter Braus, the managing principal of Lee & Associates’ New York office, in an email. “You have national chains that moved in aggressively (Del Frisco’s, Capital Grille, et al.), and some locals expanded aggressively, like Wolfgang’s. Add to that a bunch of second-rate wannabes and combine it with the increased costs, plus a general trend toward healthier and faster meals like by Chloe or farm-to-table places, and I think it becomes a smaller market overall for steak. The great ones, like Peter Luger—though they are in a class by themselves—will always have customers!”

Chris Gilman, the general manager of the Palm Tribeca at 206 West Street, attributed the chain’s success to “never sacrificing in quality and our customer service is above and beyond. We treat customers like family and maintain customers over the years.” Sinanaj, too, cited “quality” and “hospitality” as the qualities that have been paramount to Empire Steak House’s success over the last eight years in New York City.

Nelson Braff, one of the owners of the Hunt & Fish Club in the AKA Times Square at 125 West 44th Street, said his steakhouse—popular among A-list celebrities—has broad appeal with its “gender-neutral design,” and vegetarian and vegan options.

“In the world of steakhouses I think we’re reasonably placed in that genre,” Braff said. “The look, the feel, the vibe, the pricing—it all goes into whether you’re more successful than the next guy.”

Levy said there are two steakhouse models that are successful: “the old school ‘traditional’ that has become the fabric of the New York dining scene and a newer sexier modern more feminine-friendly experience.” The latter group, he said, would include STK, Quality Meat and Strip House.

Levy warned that these types of gimmicky steakhouses “will need to work harder to stay relevant over time.”

While the change in eating habits, increased labor and product costs and high rents impact all restaurateurs, they can be even more unforgiving for steakhouse proprietors.

“Traditional upscale restaurants rely heavily on having a mix of high-cost and low-cost items that blend out the food cost,” Levy said. “Steakhouses have a significantly higher cost of goods sold due to the lack of variety on their menus. While they tend to have higher prices, the margins are much slimmer.”

While his restaurant is doing well, Braff acknowledged the challenges.

“We’re doing well because we’re doing well,” Braff said. “It doesn’t mean we’re not greatly impacted by the same things that are impacting others: increased real estate taxes in the city, increased non-wage-related regulations and increased costs based on wages.”

“Labor, managing product and attracting new [diners],” Zagor said, “is a perfect storm of challenges for the steak segment.”

To counter them, Zagor said, steakhouses will need to have the following: a broader menu with new higher-margin offerings, smaller portions, healthful options, ethnic selections, defined cocktail and wine programs, and transparency, like an open kitchen.

Despite the issues they contend with, more steakhouses are cropping up.

Thomas Durels, the executive vice president of real estate at Empire State Realty Trust, the owner of 1359 Broadway at West 36th Street, said that Wolfgang’s is a sure thing when it opens in late fall as it has “one of the best restaurant operators in the country,” and it has a “proven formula and a huge following” with its “20 restaurants worldwide.” Besides, he noted, with the infusion of office workers in the area, there’s an appetite for high-end restaurants.

When asked about how Wolfgang’s will fare when people are looking for healthful fare, Durels responded, “Steak, fish and chicken—what’s unhealthy about that? It’s a protein-based diet!”