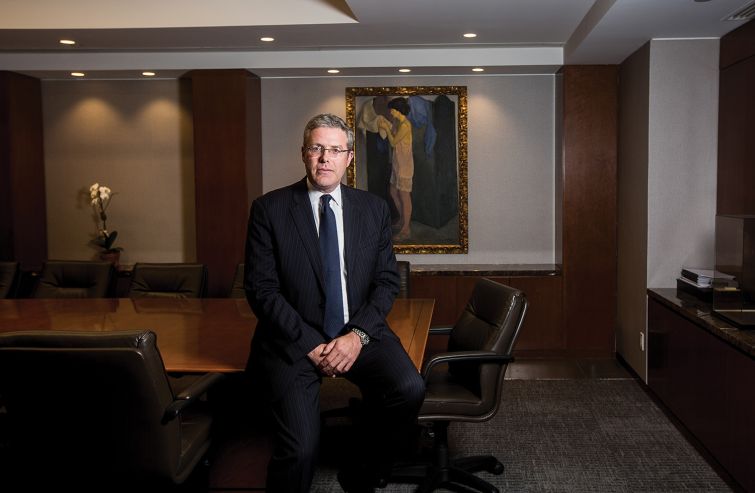 There are those in the real estate business deluded enough to think that all the worst parts of the retail apocalypse are behind us.

“I don’t think we’ve hit bottom yet,” the 50-year-old partner and chair of Morrison Cohen’s real estate loan workouts, restructuring and foreclosure practice, said about the state of retail. “Things are going to get a lot worse as we’re looking for the balance between brick-and-mortar and e-commerce…While there’s been an earthquake of events that have caused a seismic shift, the aftershocks are still going to be felt, and they may be harder and more difficult to deal with than the actual quake.”

When it comes to retail woes, Scharf said he is seeing a “daily influx” of different types of retail issues from Morrison Cohen’s clients. From retailers with lease obligations they can no longer afford to landlords experiencing vacancy rates they never had before (and as a result are now scrambling to preserve cash flow and locate refi opportunities), it’s no picnic out there.

“A day doesn’t go by where we [aren’t asked,] ‘How are we going to deal with this particular property?’ It could be from the landlord side, or it could be the tenant side,” Scharf said. Then there are other, larger-scale issues and restructurings that require talking to lenders, such as covenant defaults and the impending inability to refinance, which is then going to lead to monetary defaults.”

And when owners find themselves in the unfortunate situation of covenant default—where there’s a failure to fulfill certain conditions under the loan agreement—there’s not a lot of movement in terms of being able to get those troubled deals restructured. The reason for that is the significant “trading in the tranches of debt that are going on behind the scenes,” Scharf said. Plus, ascertaining who the controlling noteholders are in the debt stack is adding complexity, and delays, to any negotiation processes.

“There’s a lot of jockeying behind the scene that is creating stagnation for the owners of retail who have covenant defaults and are clocking default interest while trying to get in there to restructure [their assets],” Sharf said, and adding insult to injury, “refinancing is almost impossible. If you want to do a refinance, your lender is going to have to be willing to take a discounted payoff, and that’s not something that happens easily or quickly, especially when dealing with retail loans that may have been securitized.”

But until the monetary defaults start to come, we likely won’t be seeing any big retail foreclosures or opportunities for restructurings.

“The covenant default process is not something that will drive changes in ownership structure,” Scharf said. “When we get to real monetary defaults—like we saw with Nine West and like we saw with Toys “R” Us—those are the ones that once there is a monetary default someone is going to take action to preserve, to foreclose, to get after the asset. And those are going to cause the bankruptcy restructurings.”

Speaking of Toys “R” Us’ demise, Scharf gave the retailer props for its efforts in trying to reinvent itself to stay current with consumers and compete.

“What I find most interesting is, Toys “R” Us was years ahead of the curve in experiential retail. They were providing experiences in their stores to consumers that would keep consumers coming back—the touch, the feel, the Ferris wheel [in the Times Square store],” he said.  “Unfortunately, they stayed stagnant and didn’t remain current. They ultimately ran out of rope because the consumer was able to go into a search engine and read reviews and get the toys for their kids without the car ride to the mall and the screaming kids.”

The retailer recently hired Raider Hill Advisors to assist in the sale of 284 of its properties so what remains of Toys “R” Us is its intellectual property, and Scharf said he is seeing this as a valuable residual in retail bankruptcies.

“We’ve seen intellectual property come out of bankruptcies and have value. We’ve become an IP-driven society and a brand such as Toys “R” Us has years of consumer loyalty,” he said. If people can take Toys “R” Us and turn that into a different type of business that doesn’t involve brick-and-mortar, that’s really where the value is. But with the [$5 billion] debt stack that the company had they simply can’t sustain the business on the IP value alone.”

Although some lenders now treat retail assets like the bubonic plague, fear not, retail owners in need of financing, because all is not lost.

“Lenders are lending to retail owners, but they’re looking closely at the quality of their tenants. And there are plenty of quality tenants out there who pay their debt service, do triple-net leases and take up space because they are looking for a foothold in a market that is very soft. So there’s opportunity out there,” Scharf said.

Ultimately, “It’s all about the retail owner’s basis. If they have severely leveraged themselves up over the last 10 years, they’re in trouble. But you have some old-time retailers who didn’t buy into a heavily leveraged model. They have an ability to reprice and get the best tenants out there; those are the ones the banks will lend to.”

Not all was grim during CO’s interview with Scharf. Check out the below video for all the good in retail!