Subordinate lenders are matching production highs from before the crisis. Is instability far behind? 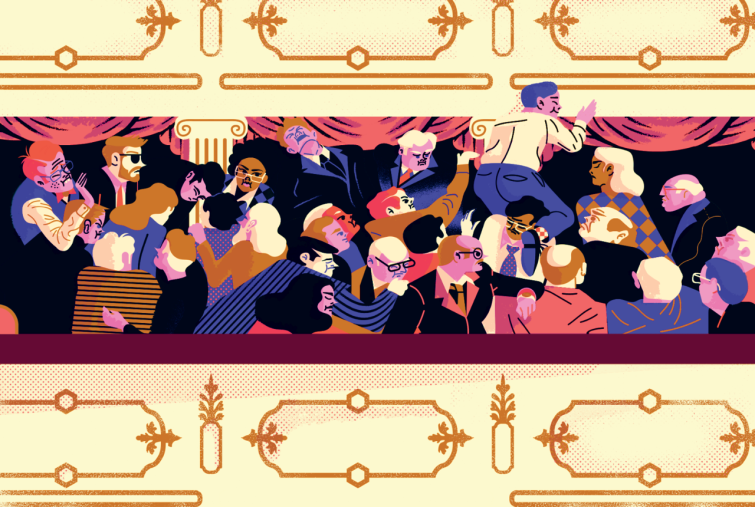 Even in late 2007, just before the global financial crisis, few and far between were the sages who predicted how abruptly the music would grind to a halt.

But throngs of industry observers did notice a distinct development that, in their eyes, marked a definite shift from a healthy period of stable asset-value growth to a stagnating market. Suddenly, they found, pairing solid returns with low levels of risk had become as difficult as squeezing water from a stone.

The change was a rise in mezzanine lending: high-leverage debt that is just barely senior to equity in real estate capital structures. If income from a property falters and the owner can no longer cover required payments, mezzanine lenders are the first debt investors to take losses.

“The market for office towers, apartment buildings and shopping malls is in an awkward middle stage—the boom is clearly over, but no bust has happened,” The Wall Street Journal wrote in December 2007. “So it is no surprise that [mezzanine lending] is suddenly in vogue with traditional real estate players.”

Halfway through 2018, it’s tough to find soothsayers predicting an imminent fall as dramatic as the one that played out 10 summers ago. But a new crescendo in aggressive mezzanine lending has debt players dusting off their crib sheets from the peak of the last cycle to compare notes.

Today, just as in early 2008, a relative paucity of deals has lenders chasing racy returns higher into the capital stack, according to David Tobin, the founder of New York City-based finance brokerage Mission Capital.

“The similarities are that one, there’s an incredible amount of liquidity in the marketplace, and two, there’s a little less discipline than at other parts of the cycle on the part of lenders,” Tobin said. “Three, there’s just a risk-on attitude on the part of investors and borrowers.”

Just about every big commercial real estate bank lender has joined the fray. Morgan Stanley, Bank of America, Barclays, Capital One, Natixis and Wells Fargo have all built out their mezzanine lending platforms, according to reporting by Commercial Mortgage Alert last month. In order to drum up business, each has expanded the amount of debt it is willing to underwrite to as high as 70 or 75 percent of the underlying property value, hoping property owners will treat them as one-stop origination shops when looking to borrow.

The banks are making the high-yield loans with the aim of selling them off their balance sheets—but they nonetheless must accept the risks of holding junior debt until they can find willing buyers.

Squint, and the idea of a slew banks saddled with over-leveraged loans can call to mind shades of the frothy financial sector that prevailed before the 2008 crisis. In late June, Deutsche Bank’s American business unit failed a Federal Reserve stress test mandated by the post-crisis Dodd-Frank Act, intended to ensure banks are well capitalized relative to their lending. As a result, Deutsche Bank was forbidden from moving profits overseas. Two other major institutions, Goldman Sachs and Morgan Stanley, also came up short in the stress test, though the Fed’s intervention in their bookkeeping was more lenient.

Giant global banks have seized on a mezzanine strategy more recently, but a panoply of energetic real estate debt funds had poured into the space since early in the economic recovery. Industry giants like Blackstone and Starwood Property led the way, seeking out imperious junior debt opportunities to lock in high returns amidst a competitive fray of new fund lenders.

“It’s driven by what’s been the prevailing rate structure over the last seven or eight years,” Tobin said. “There seems to be very little profit in the senior loan. Anyone looking for excess yield is looking for the B-piece of the senior loan, because we’ve had this overall compression of yields and rates.”

It’s tricky to track returns and volume for high-yield debt, analysts say. Like spiked punch at a high-school dance, mezzanine lending can escape formal notice even as it fuels the party.

“Mezzanine loans and other high-yield assets such as B-notes are difficult to measure, in large part because each is relatively unique and most investors are private entities that are loathe to share performance information,” Paul Fiorilla, the research director at commercial real estate research firm Yardi Systems, wrote in a recent report.

Still, all visible signs point to a thriving trade in the middle of the capital stack. A new subscription-based tracker—called the G-L 2 index after its creators, finance experts Michael Giliberto and John Levy—aims to pull back the curtain by providing benchmarks for mezzanine loans’ returns.

“For the most part, institutions that want to raise third-party capital know that in order to do so, they’re going to have to have some benchmark,” Levy said.

Chris Moyer, a managing director at Cushman & Wakefield, averred that comparisons to the mezzanine lending frenzy before the financial crisis are overblown, because today’s mezzanine lenders are better equipped to handle first-loss positions than the players who made the loans 10 years ago.

“We’re seeing more hedge funds or real estate operating companies that have raised debt funds that are actually making [mezzanine loans],” Moyer said. “They have a better understanding of last-dollar exposure than a financial institution reliant on an appraisal [has], because they’re by nature real estate operators who value the equity. [And] in the event of a default, they have the ability to step in and operate the entity. That’s one of the big distinctions.”

But not everyone is sanguine about mezzanine lending’s current vogue. Michael Episcope, the co-founder of Origin Investments, a real estate private equity fund, warned property owners’ high-leverage financings could put them at risk of foreclosure if they can no longer make timely payments.

“The challenge is this. Say you’re in equity and you’re leveraging 80 percent. If [the property’s value] goes down 10 percent, you’ve lost 50 percent of the value on your investment,” Episcope said. “Chances are, you’ll lose the property. We’re nine years long in this expansion, and there’s probably a recession around the corner. The risk-reward just isn’t worth it.” A borrower so strapped for cash that he needs to mortgage 80 percent of a property is likely overplaying his hand, the fund manager said.

Owners “turn to [mezzanine lending] to solve the capital structure,” Episcope said. “People who use mezzanine debt tend not to have deep pockets.”

No Shortage of Aggressive Lenders

Unable to ignore that yields are so much higher in the space, some fuddy-duddy life insurers are taking a swing. Athene Group, a seller of annuities and life-insurance policies in Des Moines, Iowa, has shoveled nearly a third of its $6 billion mortgage portfolio into mezzanine loans, and American Financial, a Cincinnati-based life insurer, has devoted almost a fifth of its $2 billion portfolio to junior debt. Even TIAA-CREF, one of the country’s largest real estate investors from the life insurance industry with a $27 billion balance sheet, has posted 10 percent of that capital to mezzanine financing.

Allocations like those contribute to what Tobin said was a marked increase in the volume of mezzanine lending compared even to the peak of the last business cycle in 2007.

“While the structuring of senior mortgages is much less complex, availability of mezzanine debt…is much more prevalent,” Tobin said. “It feels like the capital stack is much more simple now, but we’re getting up to the 85 percent to 90 percent leverage place again—like we were [before the financial crisis. Lenders] are just doing it differently.”

Even as the economic expansion enters its second decade, the proliferation of new mezzanine lending vehicles shows no sign of abating. Last October, New York developer and lender Greystone & Co. launched a new fund designated specifically for small-balance commercial mezzanine loans between $500,000 and $5 million, stating in an announcement that it would underwrite interest-only loans to leverage ratios as high as 85 percent in return for 15 percent yields.

“Most CMBS lenders don’t do their own mezz,” Rob Russell, the company’s head of CMBS loans, said in an interview with Commercial Observer last month. “Very few—if any—originators of mezz play in the space.”

Typifying the uber-competitive lending landscape, Russell said Greystone was forced to consider the strategy to set itself apart from peers.

“[When you’re] doing hotel, office and retail loans, you’re one of 30-odd conduit shops,” the New York-based lender explained. “[People ask], ‘What sets you apart from the others?’ It’s a fair question.”

In a typical deal from May, the loan shop melded a $9.8 million first-lien CMBS mortgage with $1.1 million in junior mezzanine debt on pair of hotels in a rural part of North Carolina. Greystone wouldn’t provide the details of the mezzanine loan’s terms and interest rate. CMBS data weren’t yet available.

Big-time asset managers like SL Green Realty Corp. and Brookfield Asset Management are joining the fray as junior lenders as well—leading some to wonder whether those companies are rooting for their borrowers to go underwater so they can take possession of value-add properties at attractive cost levels. Numerous sources have told CO, for example, that a mezzanine loan SL Green had made against Midtown’s 245 Park Avenue allowed the company to jump into an equity stake in the building after its prior owner, Chinese insurer HNA, stepped away from the building late month.

“The so-called ‘loan-to-own’ space—it’s a natural place for Moinian [Group] or Related [Companies] to be, because they’re exceptional operators,” Tobin said. “If the deal goes sideways, they can step in. They can provide additional capital and provide expertise.

Steve Kohn, the president of C&W’s equity, debt and structured finance group, disagreed, noting that if a debt investment fund starts racking up ownership positions, its investors would likely holler.

Episcope agreed that junior lenders are not, for the most part, out to grab the keys.

“It’s not as easy as people think to take over a property,” Episcope warned. “Equity has a controlling position, and they fight like hell.”

Even if the sector’s stability isn’t undermined by predatory lending, the fund manager believes that junior lending is sure to contract once the business cycle clears its crest.

“I think there’s a very good chance we see some sort of pull back in the market,” Episcope said. “If you’re a mezzanine lender with 30 or 40 loans out there, I’m not going too far astray to say you’ll probably wind up taking back 10 or 20 percent of your investments, or have the keys handed back to you. You have to assume that you’re going to take the property back.”

But given investors’ insatiable appetite for his index data, Levy, for his part, is bullish. Today, his index tracks about $100 billion in junior commercial real estate debt.

“If you called me within the year, we’d have the better part of $200 billion in our index,” Levy said. “We’ve already doubled the size, and we’re going to double it again.”