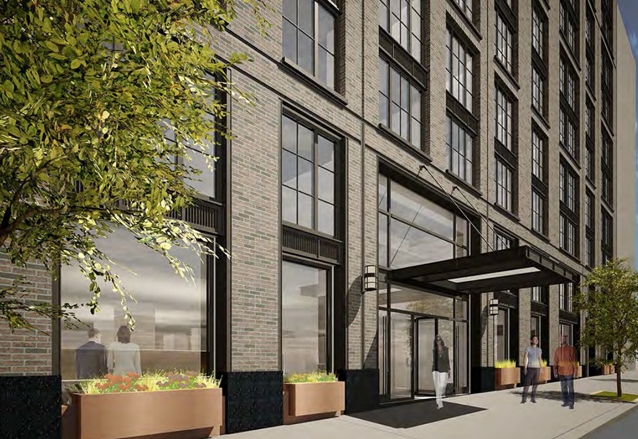 Patrinely Group, DHA Capital and USAA Real Estate Co. are the property’s owners. In October 2017 The Real Deal reported that the trio was looking to sell the asset, but no sale has taken place. Officials at the borrowers did not immediately respond to a request for comment.

The five-year debt replaces and consolidates previous debt on the property, provided by Landesbank Hessen-Thuringen Girozentrale, often called Helaba, in 2014, with a new $62.9 million gap mortgage from PCCP.

“The project is an attractive, recently-built multifamily project in a gateway market,” John Randall, a partner out of PCCP’s New York office, told CO. “We perceive that the location will benefit from the westward shift in renters, given the maturing Hudson Yards submarket.”

“Given the quality of the asset and expertise of the sponsorship, we had a very positive response to this financing offering,” Gil told CO via email. “PCCP distinguished themselves by providing a senior stretch loan, flexibility that was custom to the business plan and a seamless execution.”

The 14-story building, completed just two summers ago, stands between 10th and 11th Avenues in Hell’s Kitchen. Its 280 apartments are evenly split among studios and one- and two-bedroom units, with amenities for residents including a concierge service, a film screening room and space to store bicycles. One hundred thirty-five feet above street level, a rooftop terrace provides views of the Hudson River and central Manhattan.

Just more than a fifth of the apartments are designated for affordable rents. Of the market rate units, a 960-square-foot apartment on the top floor is on the market for $5,363 per month, while a 10th-floor studio—490 square feet—can be had for $3,194.

“We are very pleased with the results of the recent refinancing of 535 West 43rd Street. The lending community responded very aggressively to the offering through Cushman & Wakefield’s Capital Markets Group and we were presented with a number of people with excellent options,” said Dean Patrinely, the managing principal of the Patrinely Group. “At the end of day, PCCP stepped forward with the optimal mix of proceeds, pricing and flexibility. We also think the very positive outcome was a reflection on the project’s sponsorship that includes Patrinely Group and DHA as co-developers and USAA Real Estate and Crimson Real Estate Fund as capital partners.”
New York City-based CetraRuddy Architecture designed the structure, while landscaping firm HMWhite, a studio that created a new master plan for Madison Square Park and planted the medians on Park Avenue South, was brought in to arrange the building’s courtyard and rooftop spaces.
“The partnership believes this to be a truly exceptional asset and, as such, look forward to owning the asset as the west side continues its phenomenal growth as the place to be in New York,” Patrinely said.
535 West 43rd Street, Adam Spies and Adam Doneger, CetraRuddy, Chris Moyer, Cushman & Wakefield, dha capital, Gideon Gil, HMWhite, John Randall, Landesbank Hessen-Thüringen Girozentrale, Madison Square Park, Noble Carpenter III, Pacific Coast Capital Partners, Patrinely Group, Steve Kohn, USAA Real Estate Company
Features
National