As Wildfires Increase in California, How Is Real Estate Going to Cope? 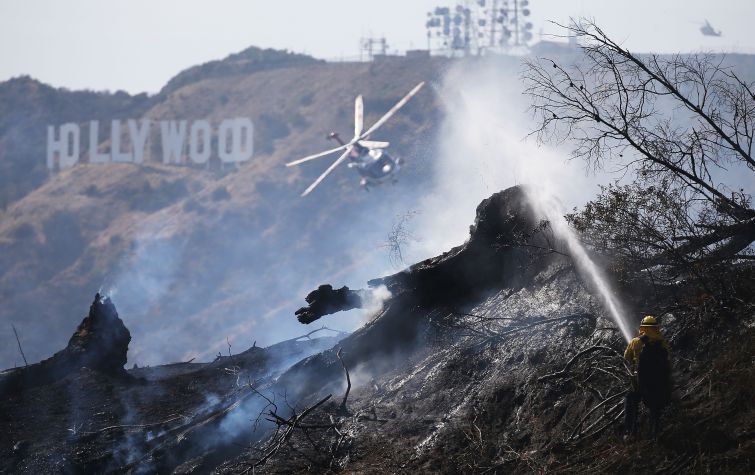 Firefighters including a helicopter work the Griffith fire. Photo by Mario Tama/Getty Images

For all its natural beauty, California is also a state prone to natural disasters, from earthquakes, mudslides to wildfires—and thanks to climate change this will only worsen in the future.

With record-high temperatures, persistent drought conditions fueled turbo-powered winds, including the annual Santa Ana winds, the likelihood and severity of wildfires has increased. And, in addition to its myriad other effects, it has become a real estate concern.

Last year was especially devastating to California, as more than 505,000 acres burned, according to state records. The Thomas fire in December alone burned over 270,000 acres in Santa Barbara and Ventura Counties in the first two weeks, destroying or threatening over 19,000 structures. And the devastating Napa and Sonoma fires of last October proved that even so-called “safe” commercial structures, like a local Kmart and Costco, were vulnerable. The Tubbs Fire, which started in Calistoga and destroyed portions of Santa Rosa, became the most destructive wildfire in modern California history, flattening 4,655 homes, 94 commercial buildings and 894 outbuildings — barns and sheds — for a total of 5,643 structures, the San Francisco Gate reported. According to the California Department of Insurance, as of May they had received 4,991 total claims for all commercial property related to the 2017 October and December wildfires, with 343 claims resulting in total loss and $1.5 billion in direct incurred losses.

Even urban areas like Los Angeles are not immune. Last month, a wildfire in Griffith Park shut down the famed Griffith Observatory and, before then, a brush fire in the Sepulveda Pass area near the Getty Center charred 475 acres destroying at least four homes and damaging 11 others.

Fire experts, like Dr. Chris Dicus, professor of fire and fuels management at California Polytechnic State University in San Luis Obispo, said that a “long simmering problem is coming to a boil.”

“Certain areas are prone to burn at high rates of speed and high velocity, and that tends to be in the chaparral shrub lands in the central and south coasts of California,” he said. Known wind tunnels that channel the powerful annual Santa Ana winds and sundowner winds that fueled the fires in Santa Barbara last winter, are also culprits.

“The losses have definitely accelerated over the last 30 years. Fifteen of the 20 worst wildfires [in the state] have happened in the last 20 years,” he said.

Part of the multifaceted problem is the desire of people to live in areas that are prone to wildfires and ecosystems that require fire to sustain itself. “You have fires doing what they are supposed to do in natural areas and you couple that with human development. That’s where we have real issues,” he said.

The push for denser single-family housing developments on smaller lots to avoid urban sprawl and create more affordable housing, Dicus said, also increases the risk, especially when you consider 90 percent of wildfires are caused by people, whether through utility lines, cars, or those of the more intentional variety.

He cites what occurred in Coffey Park in Santa Rosa, as an example.

“It really shook me [what happened] in Coffey Park. That was an area no one expected to burn, but once the wildfire moved into the city, because the population and density was so high, it just moved from house to house,” he said.

“One of the reasons for the devastation in Coffey Park was the high density of single-family houses there. In an effort to keep housing somewhat affordable, many homes there were located on extremely small lots with minimal distance between each other,” said Dicus. “Larger lots, while less affordable and which potentially lead to urban sprawl, enable a resident to better mitigate their risk by having better control of fuels that threaten their home, including both vegetative landscaping and other buildings near their dwelling.”

James Suhr, managing member of James Suhr & Associates, a developer of infill projects in urban areas of Southern California, said part of the issue is the pressure to find land to develop and people’s aversion to high-density, high-rise apartments in the state.

“California is a poster child for suburban sprawl, with people building in areas they shouldn’t build,” he said. “We have players that are on the green end of the spectrum fighting against what is actually dense development where you’ve got mid-rise and high-rise residential projects proposed that can be a solution so you don’t have construction out in fire zones.”

Suhr, who previously worked with BRE Properties as director of land acquisitions and with Newhall Land & Farming, before founding his own firm thinks the aversion is so ingrained, it operates on an unconscious level. “It’s fueled by long-ago imagery used to conceive and sell Southern California to the American public, starting with orange crate art and everything else. ‘This is the promised land.’ ‘You should move here,’ and buy into these subdivision development concepts,” he said.

Suhr also points to the impact of Proposition 13, which effectively froze property taxes to their 1975 levels until the property was sold. Municipalities had to turn to sales taxes to make up for the shortfalls on property taxes, he said, leading to the overdevelopment of shopping centers and “the prejudices that many cities have to this day” against apartments and residential uses that are not strictly low-scale, for-sale subdivisions.

Dicus has seen another phenomenon at work during his academic career, leading to an endless cycle of redevelopment that does not address the issue. After large destructive fires where homes and infrastructure is lost, people are forced to leave and many never return, thus reducing the tax base for the community to get back on their feet. In response, local jurisdictions relax some of the redevelopment rules, which, he said “just sort of sets yourself up for the next devastating fire that [happens] there.”

“By trying to be nice and accommodating to the victims of wildfires, we’re actually setting up for a future disaster. This is something I’ve seen in the U.S., Australia and other places as well.”

Joyce Coffee, founder and president of Chicago-based Climate Resilience Consulting, said given the reality of climate change, it’s imperative for those having “anything to do with the built form” to think about risk mitigation.

“Any developer that expects their property to be around more than a decade, even if their skin is only in the game for the next three or five years, it’s irresponsible if they do not take into account both the current and future scenarios for future climate risk,” she said. “Otherwise, traditional money is being spent on dinosaur projects, with retroactive and not forward-thinking impact in mind.”

Coffee, a member of the Urban Land Institute, advocates changes to land use zoning that considers major risk factors to create a bigger buffer and other restrictions that protect property and livelihoods.

“Of course, the minute I start talking about that, those who are in those climate-risk wildfire areas are going to say, ‘wait, the value of our property is going to go way down,’” she said. In response, she advocates for the government to create a “social safety net” through a taxpayer-fed “trust fund for climate-related risks” in states like California, which has been proactive in addressing the issue of climate-related natural disasters including wildfires.

“The buck needs to stop somewhere,” she said.

For now, at the very least, some commercial developers have already begun rethinking projects in the pipeline.

Turko Semmes, founder of Semmes & Co Builders, for one, who has been in the construction business for 40 years and served on the Fire Safety Council for San Luis Obispo County for the last decade, is reassessing materials used in the roofing of buildings being constructed in the Rossi Road Center he’s developing in Templeton on the Central Coast.

After Napa, however, it’s something he has started to consider, specifically how the flat roof designs of commercial buildings made them susceptible to fire from outside during the wind-fueled fire events. High winds basically turned the wildfires into a “fire in a hurricane” and cast embers and large burning branches onto the buildings’ roofs, which typically are of rubberized material set atop plywood directly underneath.

“They’re cooking away and melting through the roofing and setting the wood on fire, eventually causing the building to catch on fire,” he said. While commercial building codes to deal with this phenomenon are years out, he’s not planning to wait. Instead, he said he intends on putting a layer of non-combustible fiber-reinforced drywall between the roofing material and plywood in the buildings being built at Rossi Road. “This whole idea of fires coming from outside, it’s just a whole new thing for commercial and high-density apartments.”