This Is 40: Barry Gosin on Four Decades With Newmark 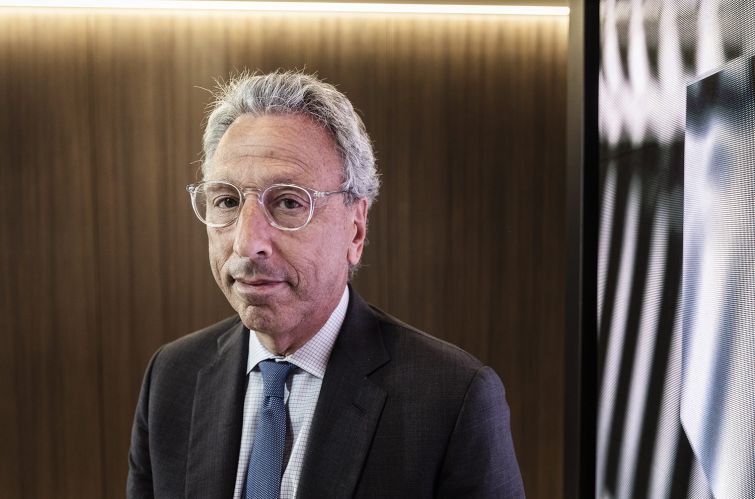 Four decades ago, Gosin, was a nervy, 27-year-old at a firm called H.L. Richer & Associates, who was doing the leasing for the Rudin family’s 41 Madison Avenue when Jeffrey Gural (today Newmark’s chairman emeritus) discovered that the young upstart was poaching tenants from his family’s property at 230 Fifth Avenue. They decided to go into business together.

But unlike a lot of grizzled veterans who take the time to sit back and revisit a lengthy career, there is very little about Gosin’s behavior that suggests he is entering a resting-on-one’s-laurels phase of his professional life. On the contrary, within a week of CO’s interview Newmark Group announced it was purchasing Robert K. Futterman’s retail powerhouse RKF (the deal is slated to close this year). In May, the firm heisted four managing directors from Eastdil Secured hotel sales and financing team.

“We were very comfortable being this New York company with a few offices around the country and a partnership with Knight Frank,” Gosin said. But in 2011, when BGC Partners acquired Newmark, “we made a conscious decision that we aren’t going to be half pregnant.”

They’ve been making bold moves ever since. We haven’t even mentioned that Newmark went public last December, or that Gural spun off Newmark Holdings (which had been the landlord part of the business with almost 9 million square feet of property in New York City and another million, or so, in the tri-state area) into GFP Real Estate. (Gosin is an investor.)

“We have a 10-million-square-foot portfolio,” said the married, 67-year-old Gosin who has two adult daughters, Brooke, 38, and Brie, 35, who are not in the business. “I developed a casino [the Sands Casino Resort in Bethlehem, Pa.], [I] built a security business, a cleaning company [Partners Cleaning]—we’ve done so many different things over the course of our career. I’ve been a tenant rep; I’ve been a leasing agent; we’ve been property managers; I’ve actually been a CM [construction manager]. That gives us a unique vantage point to understand the brokerage industry.”

So, we suppose, it only makes sense to keep doing it. And doing more of it.

Commercial Observer: Tell us about the bid for RKF.

Barry Gosin: We believe in retail long term; we think that retailers in a stressed environment need more advice, and the ability to provide them with technology and information is more critical. We wanted an iconic leader like Robert [Futterman] to take what we built and grow it.

He’s the number-one retail broker in New York—as well as really good in Chicago, L.A. and even Tokyo. He can lead the charge to build a significant retail brokerage business.

Can you tell us anything about the price?

I’m not prepared to talk about that.

How many people will be coming aboard?

We’ll add about 100 professionals and we have a similar amount already.

Let’s talk about Newmark’s IPO last year—how did it go?

It went fine. There was more hoopla about the pricing but the fact is we’re guiding for $1.40, $1.60 in earnings next year. So we’re trading at the low end of the spectrum. I have my head down. We’re focused on hiring great people, producing great earnings, growing the company and then the value will show. We’re still segmented—so, there’s a two-step process to spinning out. Right now it’s a segment. We trade under our own stock but BGC still owns 84 percent of the company. We now establish our own credit—we pay off the debt that they borrowed from Berkeley Point and then we’re on our own and trading on our own.

Aside from RKF, tell us about some of your hirings and the thinking behind them.

We hired a lot of independents. We bought ARA [Apartment Realty Advisors, a full-service investment brokerage firm focused on the multifamily sector in 2014] which was the first foray into institutional investment sales in the multifamily space. But what people didn’t realize and a lot of my brokers scratched their head and said, “Why are you in multifamily?” Because the same buyer—Blackstone, Prudential, J.P. Morgan, Invesco—they all buy multi. The key to buying an investment sales platform is the ability to provide product for private equity firms and investors who need product to invest in.

So as a result of my ARA acquisition, what’s the second move? I need to own a gateway city. Where’s that opportunity? Boston. I hire Rob Griffin with 72 people from Cushman & Wakefield. So we’re the dominant player in Boston, which means that everybody that wants to be in Boston has to walk by us. What’s my next move? The next move is Kevin Shannon in Southern California. He came over with 16 people from CBRE and now his team is 29. He opened up in San Diego. We opened up in Phoenix. We partnered with Nick Kucha in Seattle, who is the number-one guy for HFF; Steve Golubchik, the co-head of West Coast HFF; Ed Najera number third seat for Eastdil in the Bay Area; Grant Lammersen, the co-head of capital markets for Cushman from San Francisco. The list goes on and on.

Now the hotel group—the number-one hotel group in the U.S. out of Eastdil. Adam Etra, Mark Schoenholtz, Miles Spencer, Larry Wolfe. Larry Wolfe was at Eastdil for 34 years. So we are now a brand that will attract the best and the brightest.

Speaking of the hospitality group, are you’re comfortable with hospitality right now? You think the market is good for that?

The market is probably not at its highest—it’s challenged. It’s like retail. But talent is forever. We’re in a marathon; we’re not in a minute-by-minute, quarter-to-quarter business. Like when you have an opportunity to bring on a group and for whatever reason they’re the best group in a particular food group or discipline, that’s an opportunity that lasts past a weak period.

How are you guys approaching this crisis in retail?

We have a guy, Tom Dobrowski, who’s an expert at selling distressed retail. That’s an opportunity. Why is that an opportunity? It’s an opportunity because there are a lot of scrappy, hardworking, smart real estate entrepreneurs that know how to repurpose a property. And the cap rates… ya know, you could earn a 15 percent return going in and then get paid back in five, six, seven years—get all your money back—and then you have a property that you own that either can continue as a successful mall in a different environment or it could be a medical building, it could be converted to residential, it could be a land play if it’s well located.

Everyone knows the retail market has issues. If [landlords] reduce their rent, you can rent, especially in the gateway cities and constrained markets. The reason for New York City vacancy is because owners just aren’t facing up to reality. They just won’t lower their rent.

Tell me a little about your thoughts on multifamily. Obviously, you’re making this big play—is it area specific?

People have to live everywhere. So jobs drive multi. The demographics are very good for multi. People are getting married later. The aspirational nature of owning a home is somewhat diminished because people have gotten their asses kicked owning homes and not making the kind of money they made in ’07—so we have a whole new generation of people who don’t look at owning a home as the panacea that it once was. So rent. Certainly in the blue states it’s no longer a benefit to own a home because you can’t get the deductibility of taxes and mortgage interest from your pay. That was the one-sided advantage of owning a home. It requires a lot of capital—so people getting married later… [plus,] the building of multifamily around the country has been very, very prolific. And the math of owning a home isn’t nearly as good as it was compared to renting.

I try to tell my wife this all the time.

By the way, I’m in the real estate business. I rented my apartment in the city for many, many years because the math didn’t work.

Tell us a little about the spin off of GFP.

Jeff [Gural] and I have been partners since 1978—we bought all of our buildings together. His father had owned buildings prior. So I’m not in every deal, but I’m in almost all the deals. I find it way more interesting to be in the brokerage business. I still am partners on all the buildings they run. The boys—the next generation—wanted to run their own operation, and I certainly didn’t object because I’m doing this. They took my kids through all the properties last week—Brian [Steinwurtzel] and Eric [Gural] are going to take care of my kids and grandkids.

So your kids are working on that?

No, [the family is] investors. Jeff and I bought these buildings together. We bought the Flatiron [Building] together, Astor Place, the Bethlehem Steel Factory. I was generally the person who did the leasing and he was the person who ran the property. That was the plan. And then I anticipated the world coming to an end in 1987 after October of the crash. You were probably in diapers.

Okay, you were out of diapers. That time I said, “Jeff, I don’t know how we’re going to make a living. I think we need to go back and reinvigorate our brokerage business.” I went back to being a broker. From ‘90 to ‘97 if you look at the history books, almost everybody—including all these big shots today—were all broke. It started coming back in ‘97; cash flowing, the market’s better, banking industry was out of its RTC [Resolution Trust Corporation] period. For me, owning 10 buildings—at some point we bought 50—was not interesting.

I wanted to touch on some of the tech that you like.

On the institutional management side we bought a company called CFI and we integrate and implement workflow software for large corporate clients with respect for their operational spend. So we’ve done several billion square feet of clients’ implementation. We have a product called Vision—we were probably one of the first to develop a dashboard where we could combine, collect, aggregate information, so corporate real estate executives could manage their entire portfolio under a common methodology and we customize it for them so that they could get at the kinds of things they need. So the combined effort of those two things is our Vision product. We developed something called N360, which is a 3-D [Geographic Information System] mapping system, which is proprietary that we built.

Do you have a team of engineers?

Yeah, we built our own CRM [Customer Relationship Management software]. I’ve got 25 coders working on our CRM. So we do what a software company does. In our N360 we just did a deal with Reonomy—a national deal with Reonomy—to provide the information to us. We bought a significant interest in Workframe. We were one of the early investors in Hightower, which is now VTS, and we’re in discussion with a variety of different technology [companies]. We subscribe to all kinds of stuff as well.

Do you ever think artificial intelligence will tell you where to make real estate moves?

It should. It will. But what we will be is we will be interpreters of the data. In five, 10 years, our business will be very different.

I mean, it’s going to be about information. There’s going to be so much information available to everybody to be able to make decisions. Our view is that you’ll have less brokers but you will have brokers there as a trusted adviser, concierge and deliverer of the interpreted data. I spend 10 to 20 hours a week thinking about technology—Blockchain, the deployment of Blockchain.

You guys have been using it?

No, we haven’t—but we will.