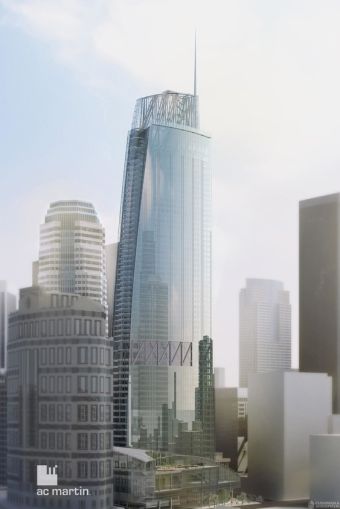 Real estate engineering firm Arup signed a 15-year lease at the Wilshire Grand Center on June 3 in one of the biggest corporate relocations in Southern California this year, The Los Angeles Times reported late last week.

In December, the London firm will move its regional offices from the Playa Vista area of Los Angeles to the Wilshire Grand Center in the Financial District, where it will occupy 66,000 square feet on the 18th to 20th floors of the 356,500-square-foot office portion of the 1,100-foot skyscraper, in a deal valued at $57 million, as per the L.A. Times.

John C. Cushman and Steve Marcussen of Cushman & Wakefield handled negotiations for the owner-developer Hanjin International Corporation. Colliers International’s Nathan Pellow and Terence Kirk along with Legacy Real Estate represented the local office of the global engineering firm.
Anchored by London-based Intercontinental Hotel Group, other tenants at the Wilshire Grand include C&W, which is headquartered at the tower, as well as Hanjin’s Korean Air. The new Arup lease and others under negotiation will bring the project to 70 percent leased, according to a release from C&W, which handles leasing for the center.

A lease perk? Arup’s logo will join the rotation of those of Korean Air and the Intercontinental, at the lights near the top of the skyscraper.

“As an employee-owned, global company, Arup quickly recognized that the sustainable workplace at the Wilshire Grand Center enhanced their ability to compete for high-level talent from all across Los Angeles,” Cushman said in prepared remarks.
Arup’s move also marks its expansion, according to a separate release from Colliers. The London-headquartered firm expects to grow its L.A. workforce to as many as 400 employees from about 300 in the next two or three years, Arup Principal Jim Quiter said in the Colliers release. The company currently occupies about 38,000 square feet on 12777 West Jefferson Boulevard in Playa Vista, where it has been for more than a decade.

Arup’s relocation is part of a citywide trend that began in 2015 and has accelerated as a variety of corporations leave locations on the Westside for Downtown due to a lack of affordable employee housing and few commuting options, according to Colliers. Arup stated these factors as well as a concentration of their clients in downtown Los Angeles as factors in the move. Recent corporate relocations include Adidas’ move from Hollywood to the Row DTLA and Spotify’s exit from West Hollywood for 115,000 square feet in At Mateo in the Arts District Downtown.