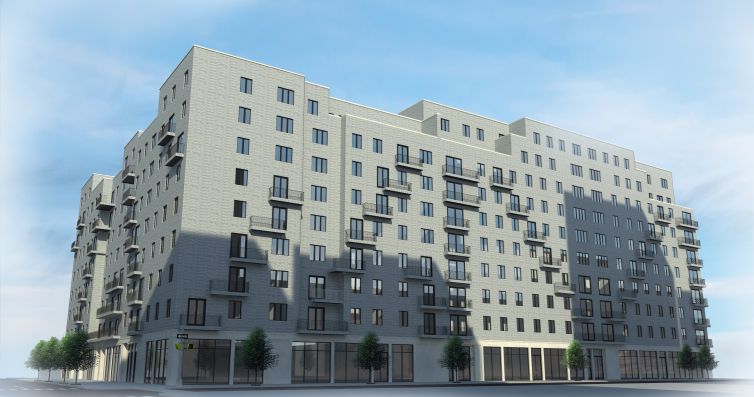 Madison Realty Capital (MRC) has provided an additional $100 million in construction financing to the developers of the seven-building Cascade condominium complex in Bedford Stuyvesant, Brooklyn, after providing $88 million for the project’s first phase last year, Commercial Observer has learned.

Isaac Deutsch’s Empire State Management, Abraham Brach and Nachman Leibowitz are building the 400,000-square-foot project at the former Cascade Linen factory site along the border of Bed-Stuy and Williamsburg. The 97-unit first phase is slated for completion this year, and the 137-unit second phase is expected to be completed in early 2020. The development will also include 41,000 square feet of retail.

The transaction marks the culmination of a series of transactions between deal parties, as well as MRC’s second round of construction financing on the property.

In May 2017, MRC acquired a matured, non-performing loan with a principal balance of $50 million on the development, working with the borrower to quickly modify and upsize the debt to $88 million in order to finish the project. The mortgage was collateralized by Phase 1 of the project—60 percent complete at the time of MRC’s note acquisition—as well as Phase 2’s land piece. The borrowers have significant equity in the project and—having significant experience both developing and lending in the area—MRC was able to understand the deal quickly, closing it within 4 days, Josh Zegen, the co-founder and managing principal of MRC, told CO.

Since the first round of construction financing closed last year, multiple units at the development are now under contract, signaling high demand for the condominium product underway at the site. Plans call for one 10-story building, two nine-story buildings, one eight-story building and three six-story buildings at 104, 114, and 134 Stockton Street, 553-569 Marcy Avenue, and 833-869 Myrtle Avenue.

“The Cascade deals exemplify what we do best – creativity, flexibility, and reliable performance – and we’re incredibly pleased to remain involved for the second phase,” Zegen said. “We were able to take a loan acquisition, which can feel like an uncertain situation for a borrower, and transform it into a strong positive for them through our approach to modifying and expanding the existing loan facility to serve the borrower’s needs.  Being developers in addition to lenders, we were able to quickly understand the value in this project and what was needed to push it forward, and this helped us to establish a great working relationship with the borrower. Our ability to work successfully through the first phase financing definitely helped us secure the deal for Phase 2, and we’re excited to be the lending partner for the full project.”

Additionally, “this area of Brooklyn appeals to the Hasidic Jewish community, and the developer is also part of the community. When you look at the community’s population growth it’s pretty substantial and there is a natural buyer for this product,” Zegen commented. “That’s one thing that I liked about this property, and a nuance that we [at MRC] understand very well.”

Earlier this month, MRC closed another construction financing in Bed-Stuy, a $55 million first mortgage loan to facilitate the completion of a planned interconnected three-building mixed-use condominium project at 948 Myrtle Avenue, as previously reported by CO.