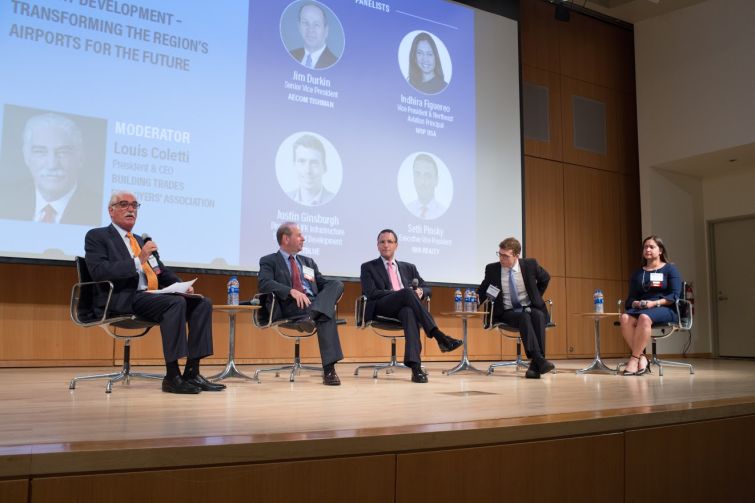 In a discussion moderated by Building Trade Employers’ Association President Lou Coletti, panelists talking airports at Commercial Observer’s transportation construction forum in Manhattan yesterday agreed that airlines are making big investments in their New York City terminals of late. And with no relief on the way for jam-packed taxiways, passengers will be spending as much time as ever waiting in the departures lounge.

“I don’t think we can build our way out of [air travel] congestion, but we can redefine our infrastructure,” said Indhira Figuereo, who oversees aviation projects for WSP. “The airports have been built in a way that you can’t go anywhere.”

John F. Kennedy International Airport is built on landfill in Jamaica Bay, and LaGuardia Airport is nestled restrictively between the East River and the Grand Central Parkway, making new runways difficult to contemplate.

A reconfiguration of the region’s airspace could help, but that would require the Federal Aviation Administration to bound into action. The agency’s NextGen plan, which sidelines 1940s-era ground-based navigation beacons in favor of more efficient routes enabled by satellite, has unfolded piecemeal for years, according to JetBlue executive Justin Ginsburgh.

“The FAA has had…a plan for NextGen for a decade, but it’s been very incremental,” Ginsburgh said. “It should be a political no-brainer to fund it, but it’s being held hostage through sequestration.”

The private sector, he argued, has taken energetic steps to improve passengers’ woes as best it can. Already the proprietor of JFK’s Terminal 5, JetBlue is working with RXR Realty to expand into Terminals 6 and 7 as well, in a design RXR Executive Vice President Seth Pinksy described as “future proof”.

“The way people check in today is very different from the way they checked in five or 10 years ago,” Pinsky said. “Trying to anticipate how technology will continue to transform is a very fundamental part of the design process.”

Jim Durkin, an airport construction veteran with AECOM Tishman, said technology is a boon to builders as well.

“The ability to develop a design and change a design is much quicker,” he said.