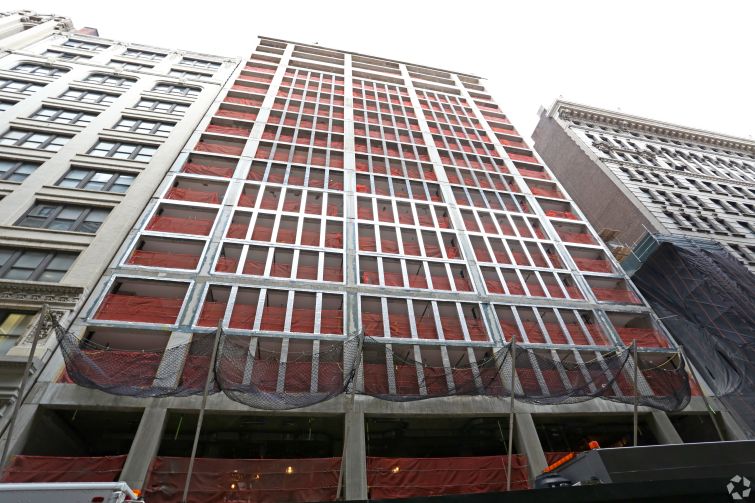 A view of the development of 7 West 21st Street. Courtesy: CoStar Group

Friedland Properties and Rose Associates have secured $218 million in permanent financing from Wells Fargo Multifamily Capital to refinance their newly minted, luxury apartment development at 7 West 21st Street in the Flatiron District, according to records filed last Friday with the New York City Department of Finance. The deal closed on March 20.

The new, floating-rate financing is a take-out of $182 million in previous construction debt funded in May 2015 with bonds issued by the New York State Housing Finance Agency (NYHFA), which were purchased by Wells Fargo, M&T Bank and TD Bank, according to Rose Associates’ website.

The new debt includes $36.4 million in tax-exempt bonds and another $181.9 million in taxable bonds, records show. A spokeswoman for Wells Fargo confirmed the bank’s role in the new financing, but declined to comment further.

The through-block development includes two 18-story buildings, with frontage on West 21st and West 22nd Streets, which are connected by a shared courtyard on the second floor, according to the development’s website. The 288,000-square-foot property comprises 288 units, including 230 market-rate apartments and 58 affordable units for households earning up to 60 percent of the area’s median income, as per Rose Associates.

Located between Avenue of the America and Fifth Avenue, the rental building was designed by Morris Adjmi Architects with landscaping by Mathews Nielsen. Construction on the property wrapped in November 2016, according to CoStar.

The property features 8,000 square feet of street retail space and a 200-car underground parking garage. Kohler, the kitchen, bathroom and plumbing supply giant, signed a lease in January 2017 to occupy the building’s retail portion through December 2026, according to CoStar.

Current monthly rents at the location range from $4,175 for studios to $8,900 for two-bedroom units, according to information from StreetEasy.

A spokesman for Rose Associates, which also manages the property, did not provide comment. A spokeswoman at Friedland Properties would only say the firm doesn’t talk to the media.