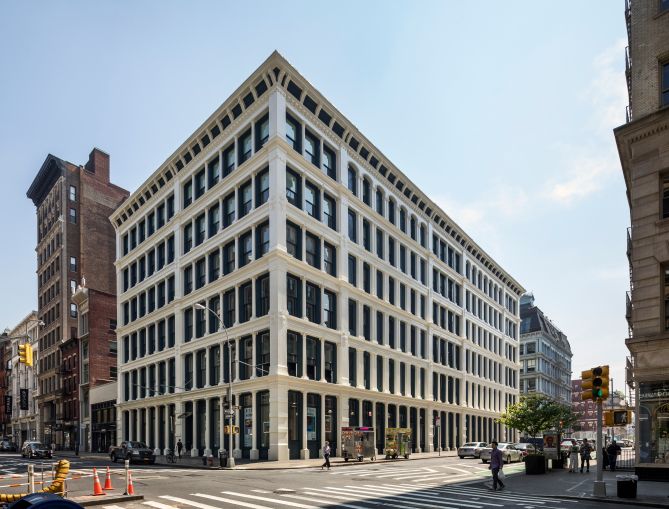 If you’re going to restore an architectural landmark and bring one of SoHo’s largest legal retail spaces to market, you better do it right.

Thankfully, no detail was too small for Meringoff Properties in its restoration of 462 Broadway at the corner of Broadway and Grand Street – smack dab in the center of the historic SoHo Cast-Iron district. Working in close conjunction with New York City’s Landmarks Preservation Commission, they  have restored a classic retail and office building that demonstrates painstaking fidelity to SoHo’s architectural traditions.

“Our goal,” says Meringoff Properties President and CEO Jason Vacker, “was to have 462 Broadway stand out as one of SoHo’s best and most iconic historic buildings. We assembled a top-notch team of experts and artisans, and we believe we have accomplished that goal.  The feedback has been fantastic across the board.” “The building is absolutely beautiful.  This retail space is SoHo’s best kept secret,” said Patrick Smith, Vice Chairman at JLL.

The full exterior renovation involved uncovering and analyzing the building’s original paint colors as it existed in 1880, and then successfully matching and recreating the original colors to its current rich pearl tone. After stripping the paint, it was determined that of the nearly 2,000 cast iron elements that make up the 108 Corinthian capitals on the building, almost all would need to be repaired or replaced. While over 600 elements were cast as replacements for missing or broken elements, the team was able to restore and reuse 1,400 of the original 140 year old cast-iron elements. The owners also reconstructed the entire 400 linear feet of storefront facade, including recreating the historic ground floor decorative ironwork and matching the original mahogany window frames, in accordance with historical photographs.

The owners  were  led in their restoration of 462 Broadway by the firm PBDW Architects – which has overseen a litany of high-profile design and renovation projects across the city, most recently for the New-York Historical Society, the Park Avenue Armory, the Palace Theatre, and Powerhouse Workshop in Brooklyn. The team was headed by none other than Sam White – the great-grandson of legendary architect Stanford White – who designed such iconic New York City civic and commercial projects as the triumphal arch at Washington Square Park, the First Bowery Savings Bank, and Judson Memorial Church.

When it came to finding the best craftspeople and artisans for restoring and recreating the building’s cast-iron components, Meringoff turned to Alabama-based specialist Allen Architectural Metals – the company that in 2016, completed the repair and restoration of more than 8 million pounds of ironwork in the Dome of the U.S. Capitol Building in Washington, completed in 2016, and who received the Lucy B. Moses Award from the New York Landmarks Conservancy in 2011.

The team was rounded out by Archstone Builders, who acted as construction managers for both the exterior and interior renovation work and Metro Restoration Services (MRS) who stripped and repainted the façade of the building and assembled and installed the new cast-iron capitals and decorative elements.

When you look at the different elements that have made SoHo an iconic destination for haute couture brands and international travelers alike, it all comes down to iron – cast-iron to be exact. The use of cast-iron allowed buildings in SoHo to have a decorative façade of intricately patterned moldings and designs modeled after classical French and Italian architecture.

This feature – along with the large windows that cast-iron metal could support – transformed a dour industrial district into a sun-lit oasis that attracted some of the nation’s first major luxury and commercial retailers in the latter half of the 1800s: with seminal brands like Lord & Taylor, Arnold Constable & Company, and Tiffany & Company setting up shop in the neighborhood.

A century later, the natural light afforded by those same large windows attracted artists from around the world who would in turn repurpose the neighborhood’s commercial buildings as live-work spaces – making SoHo a mecca for everything trendy and avant-garde in the process.

Today, the SoHo Cast-Iron Historic District, first designated in 1973 by the Landmarks Preservation Commission, is home to the greatest collection of cast-iron architecture in the world – 500 buildings in total and includes the robust shopping corridors of Broadway and West Broadway, as well as the newer and tony areas around Crosby, Grand and Howard Streets.

A changing retail market for a changing neighborhood

The owner of 462 Broadway since 1981 – when the SoHo Cast-Iron District was fast becoming a magnet for visual artists and serving as the backdrop for cult classics like Martin Scorsese’s film “After Hours” – Meringoff Properties is no stranger to the area’s unique history, dynamic tenancy, and its important role on the forefront of change.

The nod to long-term craftsmanship notwithstanding, 462 Broadway has also been redesigned to account for a number of new trends in today’s commercial retail landscape. The days of expansive department stores in SoHo and the city at-large have given way to shopping experiences that accounts for the reality of e-commerce, with last-mile delivery enabling faster fulfillment of customer ordersm and “clicks to bricks” retail providing brands with the flexibility to scale inventory up or down as needed.

Just as importantly, boutique shops and big-box retailers alike are increasingly recognizing the importance of providing unique and curated experiences for shoppers  that make their flagship stores memorable to their customers. 462 Broadway’s retail space was redesigned with this need for tailored customization in mind. The retail space has over 300 feet of storefront that can support many divisions , with abundant ground-floor street frontage on Grand Street, Crosby Street,in addition to Broadway as well as lower level and second floor spaces.

As the shift to more niche-oriented retail continues, Meringoff Properties, and their leasing team from JLL expect tenants to be attracted to 462 Broadway’s classic Broadway façade, its unique flexibility, and the special permit in place permitting retail use. This is a tremendous asset given SoHo’s unique and specific zoning rules otherwise restricting retail.

While much has been made by the media of SoHo’s recent decline in commercial real estate leasing activity, a closer look at the data reveals a slightly different story: everyone is heading south.

“The interesting thing that’s occurred” says Patrick Smith, “is that most of the activity that’s been in this market has been to the east around Lafayette Street, to the south around Grand and Howard – and to the west with the opening of the Gucci store on Wooster Street.”

High-profile global brands that have planted their flags close by include Roman & Williams, The Guild, The Webster, Gucci, Free People, Off-White, The Real Real, and Celine.

“After several years of extraordinarily strong market activity, SoHo has cemented its international retail preeminence that will take it through future market cycles,” says Vacker. “This neighborhood will serve as a prime destination for years to come.  And 462 Broadway will serve as a major focal point.”