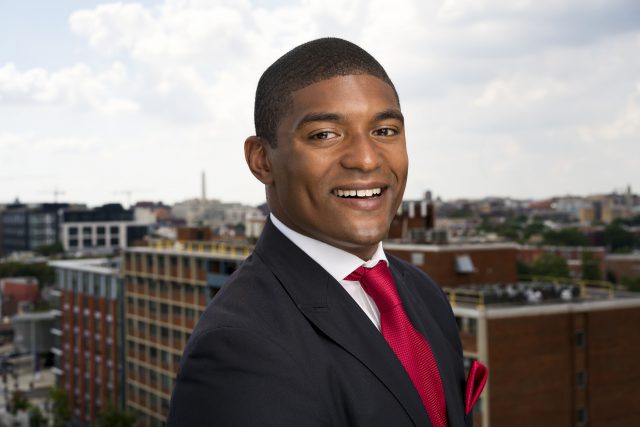 Marcus Goodwin, of Four Points, is running for an At-large seat on the DC council. Courtesy of Marcus Goodwin

With less than two months left in D.C.’s primary season, 28-year-old Marcus Goodwin has emerged as a standout democratic candidate for an At-Large seat on the city council.

Goodwin is one of several millennial candidates who are challenging incumbent At-Large Councilmember Anita Bonds, who has held the seat since 2012. Bonds, who’s in her 70s, was elected with over half of the votes during her last run in 2014.

Unlike the majority of councilmembers who represent the eight wards of the city, At-large members speak for residents throughout all of Washington. Having grown up in multiple neighborhoods and attended both public and private schools, Goodwin believes his particular experiences in the city make him well suited for the position.

If elected for the four-year term, he will also be the only candidate in D.C. history to have a professional background in commercial real estate. As cranes hover in all four quadrants of the city and activists rally against gentrification and displacement, Goodwin believes this professional expertise is just what D.C. needs at this moment.

“I understand the goals and objectives of commercial real estate firms. I understand how they operate and I have deep connections to get decisions to the table,” said Goodwin, a resident of 16th Street Heights. He plans to champion affordable housing and displacement if he were to win the June 19th primary election and November 6th general election.

“Developers will respect my opinion and understanding on a level that no other council member has ever been able to command,” he told Commercial Observer.

Goodwin would also be the youngest representative on the current 13-member council. “Millennials are stepping up because we’re a generation that is not satisfied with the status quo, we’re not satisfied with accepting circumstances as they are, and we are the most ambitious and eager to contribute,” he said. “I’m excited to see millennials running for office [in D.C. and across the country] and I’m excited myself to be running for office.”

Goodwin is an acquisitions associate at commercial investment firm Four Points. With a background in finance from investment bank Morgan Stanley, he works to purchase new properties and keep investors abreast on projects.

“Marcus is a very hardworking and intelligent guy,” said Four Points co-Founder Stan Voudrie. “He joined the team a couple years ago and has been making an impact since his first day.” Goodwin’s contribution to the company is reflected in the deals he’s helped negotiate, including Chapman Stables, a historic warehouse turned mixed-used property with 114 units in Shaw, and Perla, a new 66-unit project under construction at the site of a former church in Truxton Circle. Both properties have a small percentage of below-market-rate units.

Goodwin also adds value to Four Points—and the city council—–as a native Washingtonian. His mother had a home in Columbia Heights in Northwest, while his father lived in Congress Heights in Southeast. He attended D.C. public schools before entering St. Albans, a private all-boys school in Northwest. “Having somebody that’s got a direct connection since childhood to the neighborhoods where we operate is unique and helpful, said Voudrie.

As an urban studies major at the University of Pennsylvania, Goodwin had a strong interest in politics. He got his feet wet in the political area during the summer after his freshman year. He interned for former D.C. democratic Councilmember Jim Graham, who passed away in June 2017.

The following summer, Goodwin interned in the office of the Deputy Mayor for Planning and Economic Development. “I really wanted to understand government, how it operates and how it serves people,” he said. “I thought that city government—on a grassroots local level—was the best way to impact, change and transform people’s lives.”

But coming from a working-class black family, Goodwin didn’t dive straight into politics after receiving his bachelor’s degree in 2011. “I had to create an economic situation where I could be self-sustaining and help to support my family,” he said. So he joined Morgan Stanley as an analyst in New York City.

Choosing a career in business and finance was also strategic for his future political aspirations. “I began my business career with the intent of understanding the flow of capital, how people who are decision makers in the private and public sectors work together and how that can serve the benefit of the community,” he said.

Voudrie, who has been in the commercial real estate industry for 17 years, agreed that Goodwin’s experience in commercial real estate is applicable to government procedures. “For us, Marcus is managing projects and predicting revenues and expenses of a project,” Voudrie said. “When you’re doing that for the city, a lot of the same questions, analysis and decision making comes to bear. They may have different objectives, but they’re still using some of the same skill sets to analyze the problem and come up with solutions and predict what the outcome might be.”

Goodwin left New York after two years. He returned to the District to work in acquisitions and development for real estate investment trust JBG Cos, now JBG Smith. At the time, he lived in Barry Farm—a historic African-American neighborhood that has become synonymous with crime and poverty.

In 2014, Goodwin entered Harvard University’s Graduate School of Design to study real estate and wrote his thesis on the historical background of Barry Farm and what the social implication of development on that land would mean for residents. He proposed that the best way to redevelop was in phases so that residents could stay on the land during construction. In summer 2017, residents learned that they will, in fact, be displaced during the forthcoming construction process. As a council member and community leader, Goodwin said that he would “absolutely want to be a voice in that conversation, having lived in that community.”

Goodwin is entering D.C. politics as a candidate during a time when Columbia Heights, where he spent the majority of his childhood, has seen an transformation in development with big box stores and restaurant chains helming the main corridor. His mother, a D.C. public schools teacher, bought her house for $84,000 in 1994. She’s now being taxed at an assessed value of $850,000.

Meanwhile, between 2010 and 2011, the percentage of African American residents in D.C. fell below half for the first time in decades.

“I saw people who lived on my block who were getting below-market all cash offers and who were compelled to move out by realtors, small real estate investment firms and groups around the city,” Goodwin said. “And there’s no process by which the city would get involved—not on the education side or on the regulatory side—that’s something that I want to change.”

If elected, he wants help longtime homeowners get property tax relief, among other incentives. With one out of every four D.C. homes priced above $1 million and the median price currently clocking in at $535,000, he also plans to assist renters in purchasing homes by providing more financial support within the city’s existing home-buying programs. These initiatives, he said, “will directly help slow and ease the pain of gentrification toward working-class and black communities of Washington.”

While some people say that Goodwin’s plan isn’t big enough, Carl Thomas believes otherwise. “Maybe it keeps 15 percent of people from having to flee the city, but 15 percent of 700,000 is a substantial number of people who are in a better situation,” said Thomas, Goodwin’s senior campaign adviser.

“Marcus is hoping to be the champion to make D.C. more affordable,” said Thomas, who’s spent the last 17 years involved in local and national politics. “Affordability is an interesting word because I think all politicians say they want to make D.C. affordable, but none of them really have a plan for how to even change one percent. Marcus has been able to experience it from the inside—I think we’re getting an industry insider who is capable of playing ball with the big boys.”