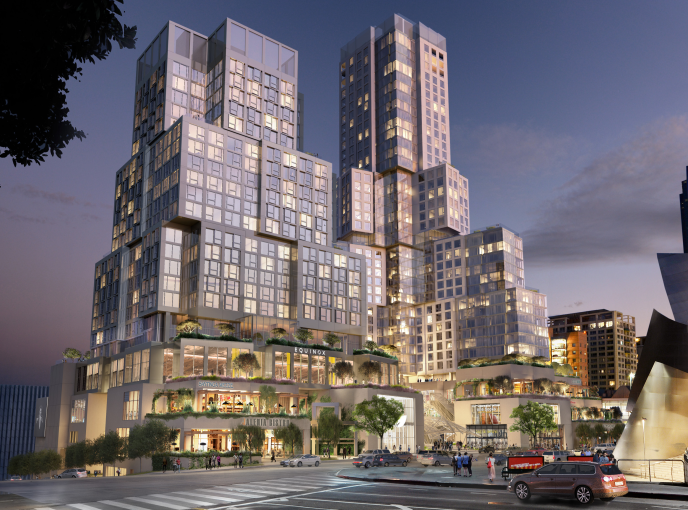 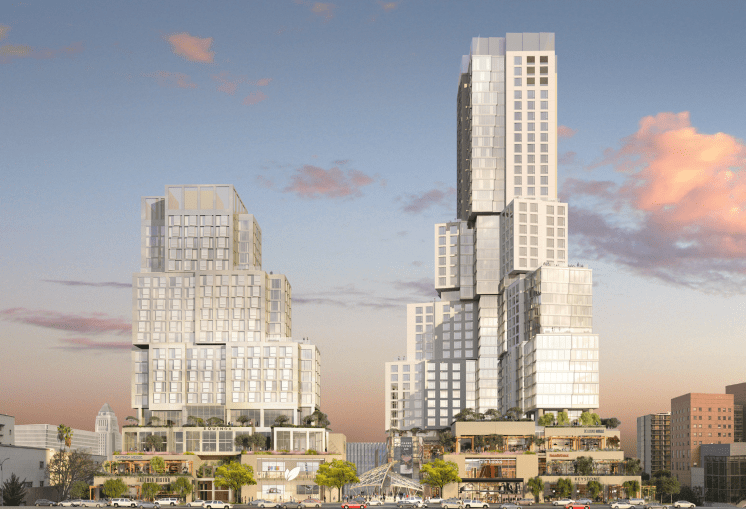 The project will be 30 percent retail. Photo: Gehry Partners/Related 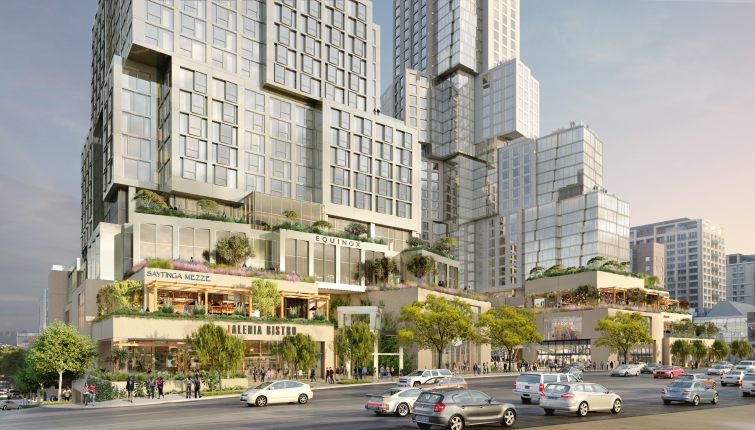 Did we mention the 314-room Equinox hotel? Photo: Gehry Partners/Related 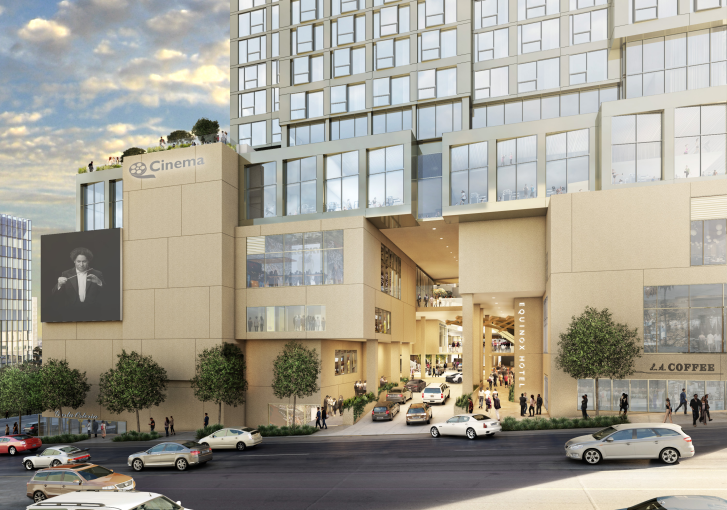 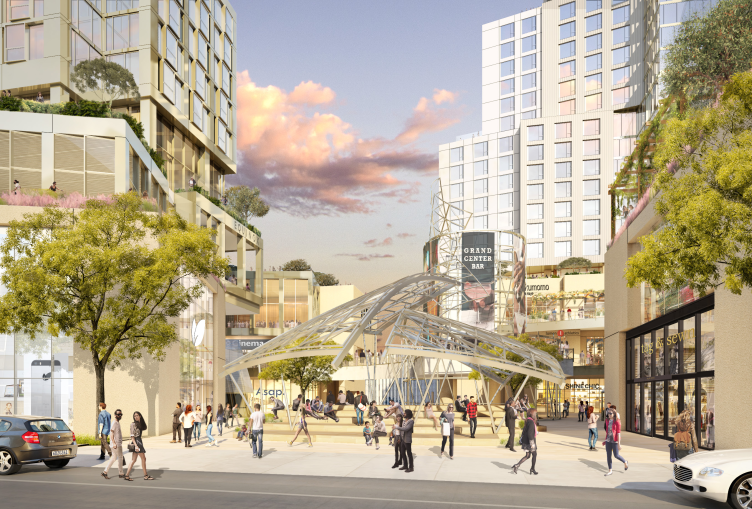 The 39-story tower will have 113 condos and 323 rentals Photo: Gehry Partners/Related 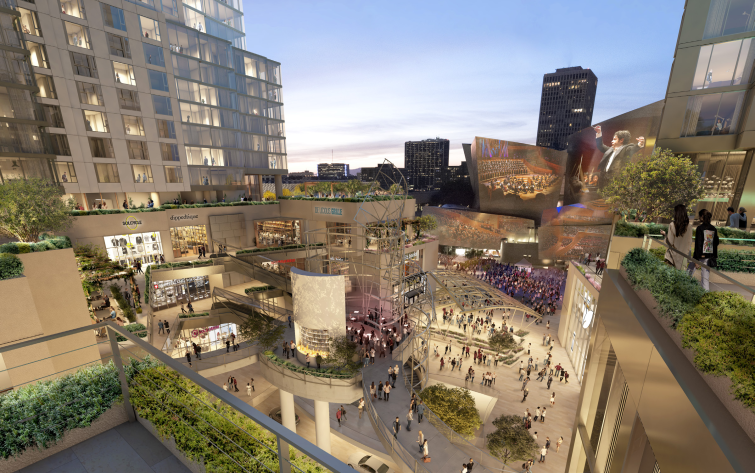 Residents and visitors will have a hard time being bored here. Photo: Gehry Partners/Related 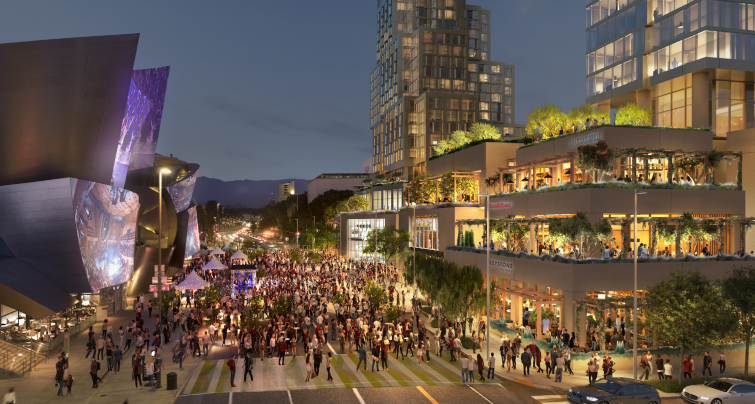 At the end of this year the Grand Avenue Project, a.k.a. the Grand, will break ground in the Bunker Hill neighborhood of Downtown Los Angeles. The mixed-use project is slated to open in the fall of 2021 with famed Canadian-born American architect Frank Gehry designing the space.

The Grand was initially announced during the Great Recession in 2008. Related Urban, the project’s developer, has spent the years since, lining up financing, including a $290 million investment from the Chinese entity CORE.

Coming in at $950 million, the 1-million-square-foot landmark mixed-use project will comprise 30 percent retail shops, a 450-seat luxury movie theater with in-seat dining, a 39-story tower with 113 condos and 323 rentals and a 314-room Equinox Hotel.

According to Richard Vogel, a senior vice president at Related, the project will open all at once, without phasing, and all the elements will be up and operational at the same time around fall 2021.

Gehry, 89, has said he’s anticipating that the Grand will spawn other projects in the neighborhood.

“We hope that the Grand can help restore Downtown L.A. as a cultural epicenter of Los Angeles,” Vogel told Commercial Observer. “Mixed-use development has been a specialty for Related for decades, and we always endeavor to ensure we create unique and contextual places and spaces that reflect the local residents’ aspirations and that of the cities in which we build.”

The center will also feature a public art piece designed by Gehry, and projectors will be permanently housed in the complex to project images on Disney Hall for those at the Grand to see from the restaurants, hotel and residences.

“We want Downtown L.A. to be the first spot on people’s minds when they think of the city—not as the second [behind the beach or other sites around the city] as they do today,” Vogel said. “We want to give residents and visitors a destination unlike anything else in L.A. including a full collection of first-class restaurants, luxury hospitality, a uniquely curated retail experience and indoor and outdoor entertainment and programing for all ages and price points.”

Downtown L.A. is going through an unprecedented transformation; there is a variety of well-conceived projects that all play to different audiences. From flashy new residences and high-rises in South Park near L.A. Live and the Staples Center, which will cater to the high-energy sports and entertainment crowd, to warehouse retro-projects being developed in the Arts District, attracting the cool, funky restaurant and gallery-goer. Then you have the continuing preservation and restoration of Downtown’s historic buildings into retro-style shops and hotels.

“You’ve got this amazing collection of performance and visual arts spaces that attract 4.2 million visitors each year, but if you look around the area, in Bunker Hill, there’s not much happening,” Vogel said. The Grand will live, at the intersection of South Grand and West First Street, across from Gehry’s iconic Disney Concert Hall, just north of the Broad Museum and the Museum of Contemporary Art, and just south of the Mark Taper Forum, Dorothy Chandler Pavilion and the Ahmanson Theatre.

The Grand hopes to attract those who want a more curated cultural experience.

Gehry has been something of the mayor of Bunker Hill since designing Disney Concert Hall, and he more than anyone wants to see the Grand through to completion.

“My hope is that this project will be a good neighbor to the buildings and institutions that have created the backbone of Grand Avenue over the years. There is a lot of work to be done. This is a beginning, and we are excited to be a part of it,” Gehry told CO.

“[Gehry’s] buildings are beautiful and they’re interesting and provocative to look at, but what he spends most of his time on is what’s happening on the street level and in the plaza and the energy level,” Vogel said. “The Grand is going to transfer Bunker Hill into a 24/7 neighborhood.”

One of the most major challenges residents face in Downtown L.A. are the vast numbers of homeless people living on the streets. Last year, according to Los Angeles Homeless Services Agency, an estimated 57,794 people were experiencing homelessness on a given night, making L.A. home to the greatest number of unsheltered residents in the country. And according to The Los Angeles Times, 20 percent of the Grand’s apartments will be available to low-income residents.

“This is probably Councilman [José] Huizar’s top issue to solve—the homeless problem,” Vogel said. “Of course he’s focused on affordable housing. But everyone understands to have this great downtown you have to solve the homeless problem. Obviously, it gets solved as new owners and operators are moving in, but it moves the problem, not solves the problem. What the councilman and Mayor Garcetti’s office want to do is solve that problem.” (Huizar’s office could not respond by press time.)

Another challenge in Los Angeles is getting people who don’t live in or near Downtown to fight the traffic in order to explore it.

Vogel said ridership on the new Expo Metro line, which goes from Downtown to Santa Monica and back, is up threefold, and Metro has already surpassed their 2030 projections.

In 2016, L.A. County approved a $130 billion in proceeds to invest in mass transit over the next 40 years. And there’s a streetcar in the plans. A vision of Huizar, the main route has been approved and is in the plans with a slated open date of 2021.

“People make efforts to come to Downtown, but they need more than just a couple of great restaurants or a Lakers game, they need more and that’s what the Grand is going to do,” Vogel said. “We want to expand that offering and provide a whole bunch of cool things to do in one place.”