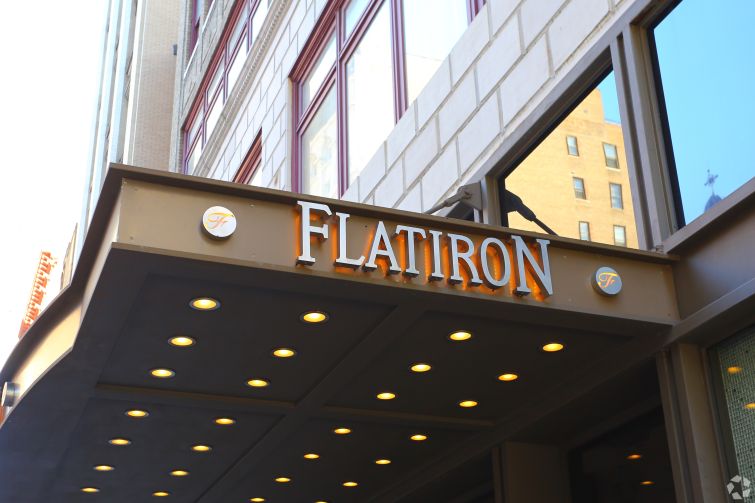 The securitized loan that landed Manhattan’s Flatiron Hotel in bad standing with its creditors was pushed into foreclosure last year amidst accusations that the majority owner “grossly mismanaged” the property, according to a series of legal documents filed over the last six months in federal court.

The $22.5 million loan makes up just 2 percent of a Wells Fargo transaction, known as WFCM 2015-C28, that is otherwise performing well. The foreclosure is unlikely to jeopardize investors’ interest in the debt instrument.

But a story told by legal motions and courtroom testimony as part of a foreclosure proceeding in the U.S. District Court for the Southern District of New York shows how a loan backed by an inexperienced borrower—on a property so ensnared in legal challenges that its owners struggled to access title insurance—nonetheless found its way into a commercial mortgage-backed securities transaction.

It also highlights differences in rating agencies’ approach to analyzing securitized debt, illuminating a split in emphases between the two companies that assigned credit ratings to the transaction.

The legal tangle—not the first for the Midtown South lodging—kicked off in September 2017, when the loan’s CMBS trustee, Wilmington Trust, filed a lawsuit against the owners of the Flatiron Hotel, at 9 West 26th Street between Broadway and Avenue of the Americas. The suit accused the hotel of serving alcohol without a liquor license, in violation of loan covenants—not to mention state laws.

That infraction came about as the result of a change of management at the hotel, Wilmington alleges.

In April 2015, when the hotel’s loan was securitized, the owner, a corporation called 1141 Realty Owner and fully held by Jagdish Vaswani, agreed that Robert “Toshi” Chan, through a company of his, You Gotta Have Faith Realty, would continue to oversee the hotel’s operations, as he had since 2011.

Chan, a colorful character and sometimes party promoter who started his career at Citibank and played a minor role as a mobster in the 2006 film The Departed, gave his name to two event spaces at the Flatiron Hotel—Toshi’s Living Room and Toshi’s Penthouse—that hosted parties and live music. But although he was more visibly attached to the project than Vaswani, his firm only held a 10 percent ownership interest in the property, according to court filings. Vaswani’s firm maintained a 90 percent share.

In years prior, the owners had struggled to obtain financing for the property in the midst of litigation surrounding a disputed sale to DelShah Capital, which had bought outstanding debt on the hotel and tried to force Vaswani to turn over the keys. Presently, however, a stabilization in the hotel’s financials, a resolution in the DelShah litigation and Chan’s prominent role managing the guest experience were apparently enough to reassure New York City-based Rialto Capital to fund a $25 million CMBS loan on the property in April 2015.

But the positive sentiments surrounding the property were shattered just months after the loan closed.

The hotel’s financials soon turned south, according to data from Trepp. And in 2015, Vaswani terminated Chan as the hotel’s manager, an action that was itself a violation of loan covenants because the move was not vetted by Wells Fargo and its affiliates, as per Wilmington’s complaint. But a deeper issue arose, Wilmington’s complaint alleges, because Chan’s management firm held the only valid liquor license for the property. With Chan out of the picture, the hotel’s continued alcohol service was illegal, Wilmington said in court.

And the hotel’s bar service was far from the only instance of mismanagement Wilmington identified. Other loan covenants required Vaswani—who had no previous experience managing hotels—to deposit revenues from food and beverage services into a special account with Wells Fargo, which would claim funds the hotel owed on its mortgage and remit the balance back to Vaswani. Instead, Vaswani admitted in court testimony to storing that revenue in a different account with Chase Bank that he maintained control over.

Vaswani also allegedly owed nearly $1 million in state and federal taxes, and his failure to pay a contractor for work done at the hotel had resulted in a mechanics’ lien on the property.

Vaswani did not respond to a message left for him at the hotel, and John D’Ercole, a lawyer at Robinson Brog who has represented Vaswani in court, did not return a phone call. There was also no response from the plaintiff, Wilmington Trust, and the trust’s law firm, Sidley Austin, declined to comment on the matter. A spokeswoman for Wells Fargo also declined to make a statement, but noted that although Wells Fargo securitized the loan, the bank did not originate the debt. (Rialto Mortgage Finance, the original lender, also did not respond to an inquiry.)

In a declaration filed in court on Sept. 25, 2017 by Vaswani in response to Wilmington’s allegations, the borrower disputed that Chan’s liquor license was longer valid once he took control of the hotel’s management, and argued that the tax and lien problems did not constitute a violation of the mortgage covenants. Hoping to resolve the case amicably, the judge overseeing the case ordered Vaswani to submit a detailed budget to the loan’s special servicer, Midland—to whom responsibility for the loan had been transferred in August 2017—to create transparency in how Vaswani was managing the hotel’s finances.

But that stipulation wasn’t enough to answer questions about how Vaswani was using hotel revenue. Indeed, his apparent difficulties in complying with the judge’s order point to his tenuous grasp on the 64-room hotel’s operations.

This March, Wilmington dragged Vaswani back to court to query his compliance with the budget order, and in sworn testimony, Vaswani appeared to be in over his head with regards to basic aspects of the hotel’s management.

Asked if he reviewed the budget submitted to the special servicer after it had been prepared by an accounting firm, Vaswani explained that he “believe[s] he just forwarded it to his attorney,” in part because it was difficult to study an Excel spreadsheet on his smartphone. Later, he could not readily explain why the budget did not include such basic expenses as fees for the hotel’s accountants and food for guests’ breakfasts.

Those weren’t the only miscues that gave Wilmington’s lawyers reason to point out shoddy accounting. Vaswani, who lived in Hacienda Heights, Calif. while running the Manhattan hotel, testified that he bought several airline tickets for himself with funds from the hotel’s budget, even though those expenses were not approved in the itemization submitted to the special servicer. And he testified that at least two employees—including Vaswani’s daughter, Nicci—were reimbursed for expenses they claimed they incurred on behalf of the hotel even though they did not prove that they had paid out of pocket.

The case, Wilmington Trust, N.A. v. 1141 Realty Owner, remains ongoing, with the next hearing scheduled for August. Adam Stein-Sapir, an expert in distressed real estate at Pioneer Financing who is not involved in this case, reviewed the court docket and noted that even if Wilmington prevails in its foreclosure proceeding, the next step could be for Vaswani to declare bankruptcy, which could delay Wilmington’s ability to repossess the property by months if not years.

That disruption in the loan’s dependable cash flow to investors in WFCM 2015-C28 would seem to raise questions about its suitability for inclusion in a mortgage-backed security, a realm where airtight covenants aim to exclude all but the most straightforward mortgages. It largely falls to rating agencies to examine the loans rolled into a transaction and deem them creditworthy, but the agencies who rated WFCM 2015-C28 in April, 2015 appeared to give differing levels of scrutiny to Vaswani’s ability to manage the property.

WFCM 2015-C28 was rated by Moody’s Investors Service and Kroll Bond Rating Agency, important blessings in Wells Fargo’s ability to attract investors to the deal. KBRA’s report, for its part, reflects a significant level of research into the hotel’s managers. The report notes, for example, that Vaswani and Chan co-own the property, and uncovers some of Chan’s previous legal difficulties, including litigation surrounding his illegal sublet of New York City apartments on Airbnb, for which he was fined $1 million. (KBRA’s report did not, on the other hand, divulge much information about Vaswani, including that he was the majority owner and had no previous experience managing hotels.)

“As part of our loan review process, we will look at the quality of the sponsorship. We feel more comfortable if it’s an experienced manager,” said Yee Cent Wong, a CMBS analyst at KBRA. “We also will consider the terms of the management agreement for hotels, because the fees directly impact our cash-flow analysis.”

She declined to comment on the firm’s view of the Flatiron Hotel loan, noting that the firm was just beginning its annual review of the CMBS deal.

But Moody’s report was less forthcoming. The property is only mentioned once in Moody’s analysis of the transaction, and no mention is made of the hotel’s ownership. (The analysis does present details about the sponsors behind other securitized loans in the transaction with larger balances.) In an interview, Moody’s CMBS analyst EunJee Park said that because CMBS lenders do not have recourse to pursue property owners’ finances beyond the assets securing the mortgages in the event of default, the agency is not profoundly interested in examining their creditworthiness.

“Because CMBS is non-recourse, it’s great if you have a very big name like Brookfield or Blackstone [as the owner of the hotel],” Park said. “Ultimately, we look to the asset.”

Park and a colleague who surveils CMBS ratings, Matthew Halpern, declined to comment on the firm’s WFCM 2015-C28 ratings in particular.

None of the transaction’s ratings has been downgraded by either agency, likely reflecting the fact that the Flatiron Hotel loan makes up only 2 percent of the CMBS deal’s balance.

Vaswani’s records in court lend more credence to the theory that he was beleaguered and overwhelmed managing the property than that he was willfully deceitful. On a few occasions, he claims to have invested large sums of his personal cash into righting the ship, and he said he was unable to more proactively comply with the judge’s budgeting orders because he was caring for his brother-in-law, who was dying of cancer earlier this year.

But questions remain surrounding how concerned Rialto, Wells Fargo and the rating agencies ought to have been when the loan was securitized. In the years prior to the mortgage, Vaswani and Chan struggled even to prove decisively their rightful ownership of the property. Multiple sources close to the transaction, who declined to be identified because of their close relationships with the Flatiron Hotel’s principals, told Commercial Observer that several title insurance agencies had declined to validate Vaswani’s rightful stake in the property because of the owners’ previous disputes with DelShah and with Berkeley Acquisitions, another firm that had tried to acquire the property.

Eventually, the owners were able to secure financing and title insurance, but only because of Chan’s relationships in those industries, the sources said.

(Chan’s work at the hotel was more widely recognized because his name had been associated with its nightlife venues since 2012.)

“This is a small hotel,” he continued. “Something goes wrong, they have to run to Home Depot to [fix it].”

The hotel is still taking reservations: bookings for standard rooms for one night this coming weekend were available starting at $360. But as far as customers are concerned, the hotel’s nightlife is the first casualty of the ongoing dispute.

An employee reached by phone confirmed that the hotel is not currently operating a bar. Last week, a recorded voicemail greeting for the reservations line at Toshi’s Penthouse explained that Chan was not available because he was receiving a massage.