Capital One Lends $100M to Refi 40 Exchange Place After Renovation 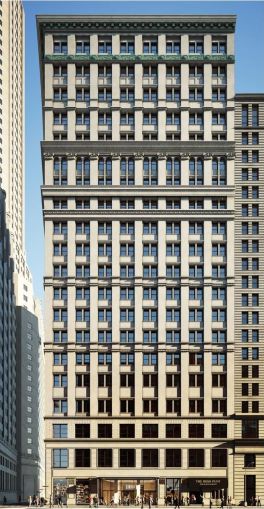 Landlords GFP Real Estate and Northwind Group have secured a $100 million loan from Capital One to refinance their 40 Exchange Place office building in the Financial District, three years after acquiring the property, Commercial Observer has learned.

The debt will pay off the previous $81.5 million loan on the 20-story, 300,000-square-foot tower, which sits on the corner of Exchange Place and William Street. The new loan has a term of 10 years and has a fixed rate, according to information provided by the landlords. Capital One declined to disclose the rate, but a spokesman for the landlords said it was below 4.25 percent.

“Capital One is committed to the New York market and so we’ve been excited to watch the transformation of 40 Exchange Place,” Paul Verdi, a senior vice president at Capital One, said in prepared remarks. “We were happy to find a solution that met ownership’s needs and we look forward to seeing the property continue to evolve.”

Paul Talbot of Newmark Knight Frank arranged the financing for GFP and Northwind, and said there was a “very strong response from a number of lenders” for the property.

GFP (formerly known as Newmark Holdings) and Northwind Group acquired 40 Exchange Place from Weiss Realty for $115 million in November 2015, as CO previously reported. At that time it took out an $81.5 million mortgage on the property from Natixis Real Estate Capital to acquire and redevelop the building.

The partners recently completed a more than $20 million gut renovation of the property, which includes improvements in tenant spaces, upgrades to building systems, a new lobby, updates to common areas and the facade, and new elevator cabs and storefronts.

“This refinance with Capital One signals the transformation of the property into one of FiDi’s most exciting office buildings, offering beautiful spaces at great value to a wide range of tenant types,” Ran Eliasaf, the managing partner of Northwind Group, said in prepared remarks.

The landlords expect the property to reach more than 90 percent occupancy in the next six months. GFP and Northwind announced earlier this month 42,643 square feet of leases in the building. The largest of those transactions was a 20,077-square-foot deal that Multicultural Radio Broadcasting signed, as CO first reported. The asking rent in the building is $52 per square foot. Other recent transactions in the property include jewelry company Chloe and Isabel’s 6,517-square-foot lease and Powell Communications’ 4,435-square-foot deal.