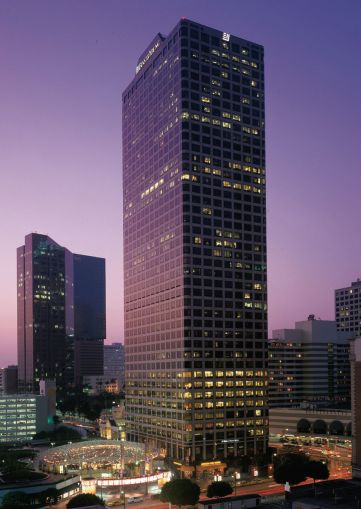 Brookfield Properties has refinanced the Ernst & Young Plaza at 725 South Figueroa Street in Los Angeles for $265 million, according to the landlord’s first-quarter 2018 results. Wells Fargo provided the loan, which closed on March 29, a Brookfield spokesman indicated. There were no brokers in the deal, he said.

The loan is for two-and-a-half years at a floating rate of Libor plus 2 percent. Brookfield realized $42 million is net proceeds upon the refinancing, the company announced. It replaces a $177 million fixed-rate loan from Wells Fargo.

Brookfield acquired the building in 2006 as part of part of the $7.6 billion acquisition of Trizec Properties, as per the Brookfield spokesman. Ernst & Young Plaza, at the corner of Figueroa and Seventh Street in the Financial District of Downtown L.A., was designed by Skidmore, Owings and Merrill.

A spokeswoman for Wells Fargo didn’t immediately provide a comment.