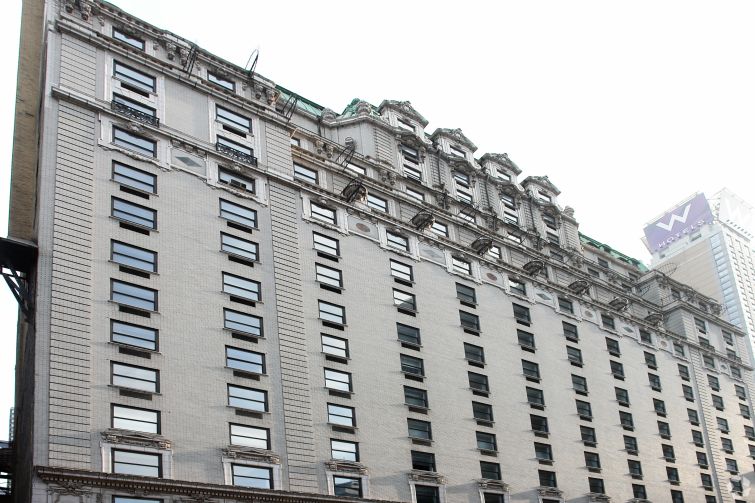 German bank Aareal has lent $140 million to refinance Times Square’s Paramount Hotel, according to property records, as the landlord prepares to revamp the food and beverage components of the property.

The agreement, finalized on April 4, reassigns a previous $100 million mortgage to Aareal from Citibank and adds $40 million more in debt backed by the hotel, which is at 235 West 46th Street between Seventh and Eighth Avenues.

Today comprising 597 rooms, the hotel opened on the eve of the Great Depression in the second half of 1928. Foreclosed upon in 1935, the Paramount nonetheless operated continually until 1988, when it closed for a year-and-a-half renovation. The hotel was refreshed most recently in 2012, but it appears more changes are afoot.

Since a long-running show in the Diamond Horseshoe nightclub in the basement closed in recent years, the Paramount’s food and beverage business slowed, culminating in the hotel’s ending its dining services in February, as Commercial Observer reported. A source previously told Commercial Observer that the hotel is planning to introduce new food and beverage offerings at some point.

Aby Rosen, the co-founder of New York City-based RFR Holdings, acquired the landmark property in 2011 for $275 million, according to the hotel’s website. Located in the heart of the Theater District, the Paramount shares a sidestreet with three Broadway houses: the Marquis, the Lunt-Fontanne and the Richard Rodgers.

Web reservations for a standard guest room for the last weekend in April run about $260, while a 950-square-foot luxury suite ran for $713.

In New York City, RFR also owns the Gramercy Park Hotel on the corner of Madison Avenue and East 21st Street, as well as 11 Howard, a hotel located at that eponymous address in Lower Manhattan. The company additionally controls lodgings in Miami, Tel Aviv and Frankfurt.

Representatives from RFR and Aareal did not immediately respond to requests for comment.