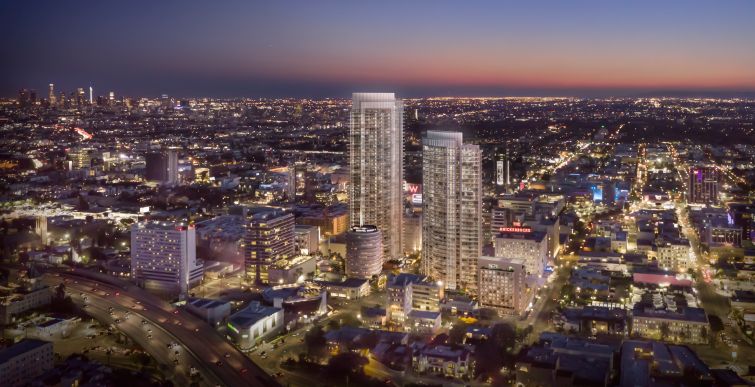 Millennium Partners filed a proposal with the city of Los Angeles last week to get a long-stalled $1 billion real estate project near the iconic Capital Records Building in Hollywood off the ground once more. The new plan prioritizes housing at the site, including some units earmarked for senior affordable housing, over commercial uses, the Los Angeles Times reported.

Now dubbed Hollywood Center, the high-rise complex located adjacent to one of L.A.’s most famous intersections at Hollywood and Vine, will double the number of rental apartments and condominium units originally planned above shops, restaurants and courtyards.

According to an official company release, the proposed development would feature the largest number of on-site affordable housing units of any market-rate development in the history of the city. The development would create 1,005 residential units from the originally proposed 492, including 133 earmarked for extremely-low- and very-low-income seniors.

“What makes communities strong is diversity and we believe a mixture of incomes, a mixture of ages, strengthens the underlying fabric of a community,” Mario Palumbo, the managing partner of MP Los Angeles, told Commercial Observer. “Hollywood attracts a lot of young people, but Hollywood also has an aging population that wants to stay in Hollywood, that appreciates the walkability and convenience and it became clear to us that the senior affordable market and segment in Hollywood was underserved.” (MP Los Angeles is the local operations of Millennium Partners, the prominent New York builder of urban luxury housing which counts The Ritz-Carlton New York Central Park among its portfolio.)

The project, which was previously called Millennium Hollywood, was halted in 2015 by a Los Angeles County Superior Court judge, over concerns that the environmental impact report failed to fully assess the project’s impact on surrounding neighborhoods, as the L.A. Times reported. The proposal also came under scrutiny when, in 2014, state geologists identified an earthquake fault running under part of the 4.5-acre property that spreads across both sides of Vine Street between Hollywood Boulevard and Yucca Street on what are now mostly parking lots. City safety officials, however, ultimately agreed with the developer that there was no active fault under the site and, thus, the new proposal does not change the footprint of the project.

The latest proposal, which must undergo its own environmental review before obtaining community, then city council and, finally, Mayor Eric Garcetti’s approval, calls for two mid-rise buildings of 11 stories each and skyscrapers of 35 and 46 stories.

Dropped from the previous proposal were a gym and 100,000 square feet of offices for lease. Such commercial uses tend to generate more vehicle traffic than housing does, which is already a quality-of-life issue in Hollywood.

In addition to the affordable and market-rate residences, the mixed-use project will feature two civic plazas and over 30,000 square feet of commercial space and create new pedestrian walkways connecting Argyle Avenue and Ivar Avenue, according to MP Los Angeles.

Handel Architects is designing Hollywood Center. James Corner Field Operations, the landscape architect behind New York’s High Line and Tongva Park in Santa Monica, will be responsible for approximately one acre of publicly accessible open space across the property.

The project, proposed without above-grade parking, is being designed to achieve LEED Gold (Leadership in Energy and Environmental Design) and ELDP (Enivornmental Leadership Development Program) certification. The latter distinction is intended to spur faster processing times for projects budgeted at $100 million or more under California state law. Construction of Hollywood Center is expected to begin in 2021. Palumbo said each site will take approximately three years to build.

The project is the latest in a series of tall buildings proposed near the Capitol Records Building, according to Urbanize LA, joining a proposed mixed-use tower at 6220 Yucca Street, as well as the already-completed Argyle House and the Kimpton Everly Hotel.