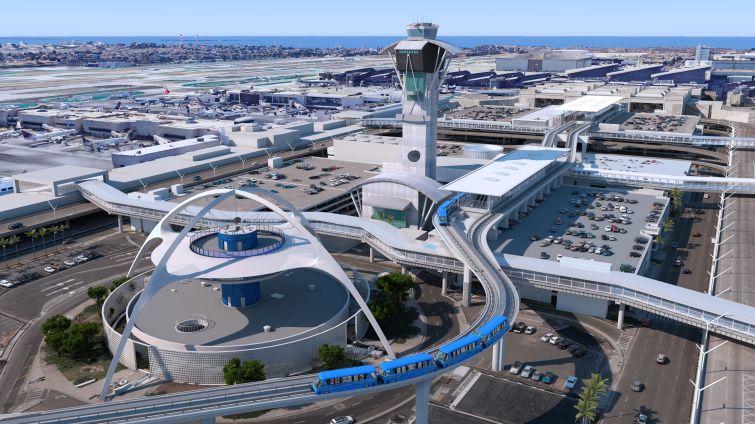 The Los Angeles City Council has unanimously approved $4.9 billion to design, build, operate and maintain an elevated train to ferry passengers in and out of Los Angeles International Airport’s central terminal and carry them to a car rental facility, ground transportation hub and station on the Metro Crenshaw Line, the Los Angeles Times reported.

The 30-year contract—one of the largest in city history—was awarded to a consortium of companies known as LAX Integrated Express Solutions (LINX), and also covers operation and maintenance of the 2.25-mile elevated tramway called The Automated People Mover. Member companies of LINX include rail car manufacturer Bombardier Transportation and construction giant Fluor Enterprises. The group’s bid of $4.895 billion was 4 percent lower than airport officials’ estimates and $700 million lower than other bidders, officials said. It includes a construction estimate of $1.95 billion.

“Making LAX the most passenger-friendly airport in the world means giving travelers what they need and have been asking for—reliable, convenient transportation to and from the terminals,” Mayor Eric Garcetti said. “This historic investment will ensure that LAX is seamlessly connected with communities across the region.”

The system will carry up to 10,000 people per hour and connect to a transportation center and the Metro’s Crenshaw and Green lines through the future Airport Metro Connector 96th Street Station. The electric train system will include six stations, according to Los Angeles World Airports, the city agency which runs the airport, three outside the terminal loop and three inside. (Currently, passengers and airport employees who take transit to the airport must disembark from the Metro Green Line at the Aviation/LAX station and transfer to shuttle buses.)

About $3.8 billion of the costs to build and run the project will come from airport revenues, the L.A. Times reported. The LINXS consortium will issue tax-exempt bonds to pay for the rest of the project, and the airport will pay the financing costs, leading to a total cost of up to $4.9 billion, officials said.

During the 25-year operating period, airport officials will make annual payments to cover operating and maintenance costs. When the 25 years are up, in 2048, the business group will return the people mover to LAX with at least five years of useful life left in the system, officials said.

The project is part of the city’s efforts to ramp up the Southland’s transit options in advance of the 2028 Summer Olympics. The project will break ground this year with service anticipated to begin in March 2023.