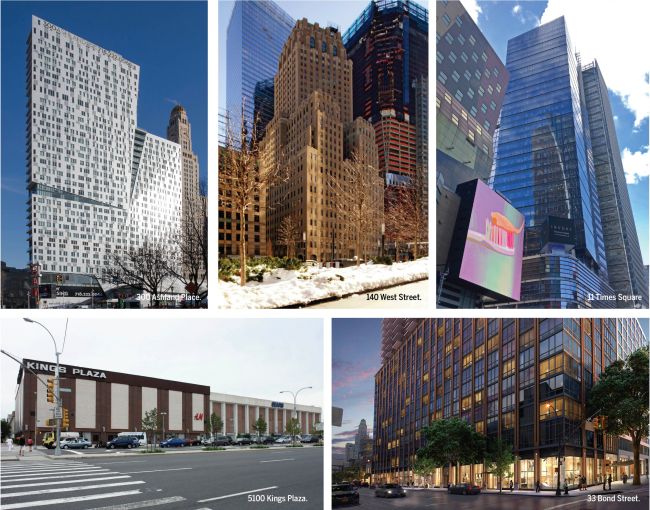 While some New York City retailers faced extinction last year, big retail deals were still being made, a testament to the fact that brick-and-mortar isn’t dead.

Following are the five biggest retail leases of 2017 in New York City, three of which were signed in Brooklyn.

TJX, the parent company of Marshalls and T.J. Maxx, signed a lease for a new Marshalls department store in 68,400 square feet at 140 West Street in Tribeca. The space spans a part of the first floor and two lower levels of Magnum Real Estate and CIM Group’s property between Vesey and Barclays Streets.

Burlington signed a 55,000-square-foot deal at Kings Plaza Shopping Center in the Mill Basin section of Brooklyn for its third location in the borough. The discount clothier, formerly known as Burlington Coat Factory, took 52,915 square feet on the fourth floor of the Macerich mall at 5100 Kings Plaza at the intersection of Avenue U and Flatbush Avenue with 2,163 square feet on other floors.

Madrid-based leisure park operator Parques Reunidos took 45,000 square feet of space at SJP Properties’ 11 Times Square, covering three floors at the West 42nd Street building. As per The New York Post, the company will open Lionsgate Entertainment City there, which will be “an interactive, ‘experiential’ attraction to highlight the studio’s film and television programming for such shows as Divergent and Twilight.”

Finally, Whole Foods took 43,000 square feet at Two Trees’ 300 Ashland Place for its first 365 by Whole Foods Market store in the tri-state area. The supermarket chain opened in two stories of the tower next to the Brooklyn Academy of Music in the Fort Greene section of Brooklyn.