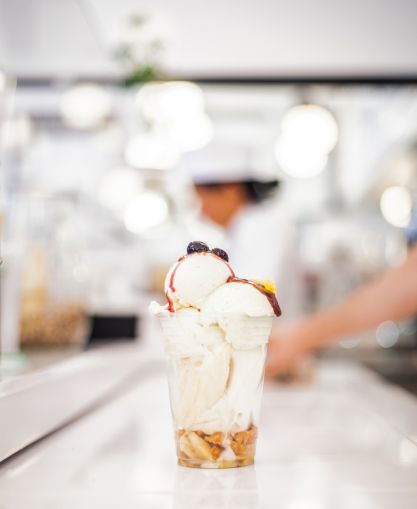 Morgenstern’s Finest Ice Cream will open its second location in Manhattan in a 3,230-square-foot space at 490 LaGuardia Place in Greenwich Village, according to the tenant’s broker, Steve Rappaport of Sinvin Real Estate.

The ice cream shop by chef and entrepreneur Nicholas Morgenstern, who is known for restaurants GG’s and El Rey Coffee Bar & Luncheonette, will retail out of the entire 1,830-square-foot ground floor of the building at the corner of West Houston Street. Morgenster’s will house production space in the entire 1,400-square-foot lower level.

Morgenstern’s will take the place of Silver Spurs, a diner that closed last month after nearly 40 years in Greenwich Village, according to Eater.

The asking rent in the 15-year Morgenster’s transaction was $35,000 a month. Rappaport indicated that the search for the new location took more than a year. The new store will open in June.

“When this incredible corner became available, we instantly knew it was the right spot,”  Rappaport said. “There are few more recognizable corners Downtown than this location with over 100 feet of wrap-around frontage at the viaduct between the West Village, Soho and the Lower East Side.”

The original Morgenstern’s location has been open at 2 Rivington Street between the Bowery and Freeman Alley on the Lower East Side since it opened in 2014.

Steve Politis of Pan Brothers handled the deal for the landlord, Lokee LLC. Politis did not immediately return a request for comment.