Everything’s Pretty Rosy, but a Wee Correction Could Be Coming: Panelists 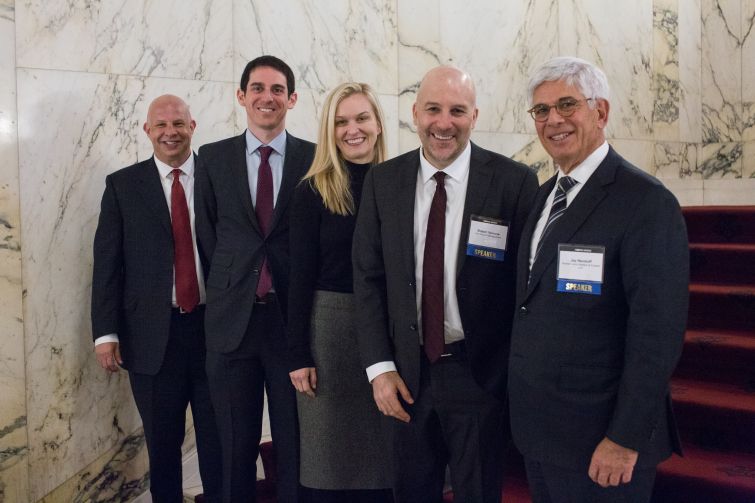 Everything’s rosy. Or is it? (dum-dum-dummmmmm!)

That was the question of the day at Commercial Observer’s spring Financing Commercial Real Estate Forum yesterday, as some of New York City’s sharpest commercial real estate players were grilled on the current state of the lending market.

By all accounts, “We’re jamming, right?” moderator Jay Neveloff, the chair of Kramer Levin’s real estate practice, asked the panel. “There are acquisitions, there are recaps, people are borrowing money…”

No doubt. And a tidal wave of capital has flooded into the debt space from every nook and cranny to accommodate those busy borrowers, upping competition and compressing spreads.

“Pricing is tight, competition is tight and credit is starting to get pushed,” Tony Fineman, the head of Eastern originations at ACORE Capital, said. “When it comes to refinances, the debt markets are getting a little frothy.”

That may be the case, but market fundamentals remain pretty strong, Michael Lavipour, a principal at Square Mile Capital Management said. “There hasn’t been excess supply, leverage hasn’t been pushed and cap rates are near historic lows,” he said. “There may be a moderate correction coming soon, but will we see a massive correction? Probably not.”

Robert Verrone, the principal of Iron Hound Management Company, sits in a pretty happy seat. As a provider of both debt placement and workout/ loan restructuring services he’s agnostic to which inning of the real estate cycle we’re in as he’ll be busy either way.

“I have no idea if a big drop is going to happen,” Verrone said. “But things are going to change at some point soon and people are going to lose money.”

For now, the allure of the debt markets is proving difficult to resist, with everyone and their mother seemingly starting a debt fund recently.  But, take heed. “It’s easy to enter the debt fund space but not easy to have success in it,” Lavipour warned.

There’s also some misconceptions around the number of alternative lenders in the market right now, and not enough appreciation for groups’ individual niches, Abbe Franchot, head of originations for Amherst Capital Management said. For Amherst, that niche is heavy value-add lending opportunities led by sophisticated sponsors.

Franchot has seen an increase in the number of mid-business plan refinances in transitional loans, where sponsors’ business plans are taking longer than expected and they’re circling back to the debt markets to take advantage of cheaper capital. She noted that she’s seen more spread compression in light-transitional than heavy value-add transactions, however, with some lenders shying away from the deals that require heavy lifting.

Those lenders who are willing work with sponsors on more complex transactions often have the upper hand in winning a deal, Verrone said. “It’s more important than pricing sometimes. Those that can solve problems get a few extra basis points. And with loan documents’ complexity, lenders need to be reasonable.”

Although still a restricted area for many traditional capital sources, the construction lending space is also more crowded than it was a year ago, Fineman said, adding that ACORE is being fairly selective in the space, but “there’s a ton of opportunity there, and way more options for borrowers.”

Lavipour on the other hand still sees challenges for borrowers seeking construction financing, although it’s no bed of roses for the lending side, either. “The profit sucks. You close the loan then don’t put a dollar out for nine months.”

“That’s a good philosophical conversation [to have],” Verrone said. “Whether or not lenders get paid enough for construction lending risk..”