Bank of the Ozarks provided a $251 million loan in the deal: sources 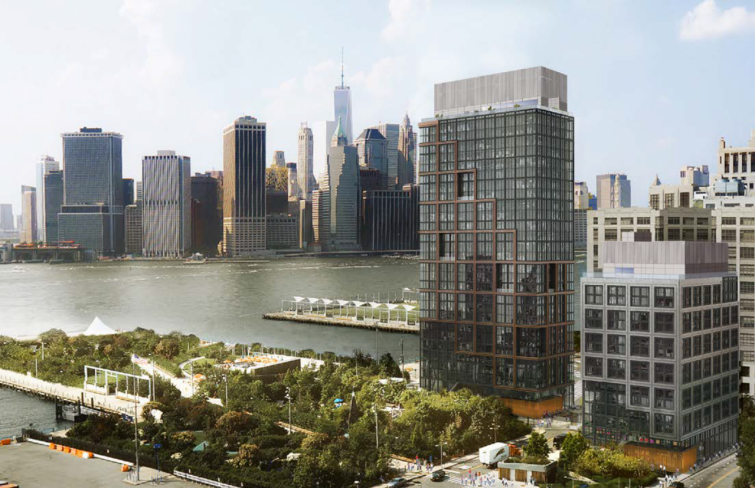 Bank of the Ozarks provided a $251 million construction loan in the deal, sources said. Officials at the bank did not immediately return a request for comment. The source of the $160 million in JV equity was not immediately clear by press time.

Meridian Capital Group’s  Drew Anderman and Alan Blank arranged the behemoth transaction. Officials at the brokerage declined to comment on which capital sources were involved in the deal.

“The professionalism and attention to detail that RAL and their partners have devoted to this project over the last three years is a testament to their vision, and when complete, they will be two of the finest buildings in Brooklyn and the New York City area,” Anderman said in prepared remarks.

Located along the Brooklyn Heights waterfront, the project will comprise Quay Tower, a 28-story, 126-unit luxury condominium tower, as well as a 14-story, 140-unit rental tower. One hundred of the 140 units will be affordable housing while the remaining 40 will be free-market rentals. Property amenities include a gym, a pilates studio and yoga room, an entertainment room and public rooftop terraces.

The buildings will have views of the Manhattan skyline, New York Harbor, the Statue of Liberty and Brooklyn Bridge.

In February, a state Supreme Court Judge Carmen Victoria St. George dismissed a lawsuit filed by the Brooklyn Heights Association that sought to halt the development on the grounds that it violated the park’s General Project Plan, The Real Deal reported, allowing the project to move forward.

Officials at Oliver’s Realty and RAL Companies could not immediately be reached for comment. Vanke U.S. declined to comment on the transaction.