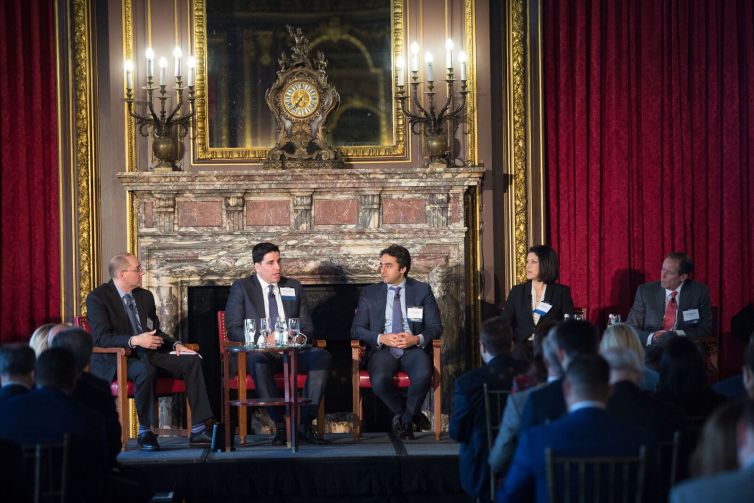 There may be a battle royale among ultra-competitive financers of commercial real estate these days—but that hasn’t stopped the three broad categories of lenders from carving out lucrative niches, panelists at Commercial Observer’s spring Financing Commercial Real Estate Forum explained yesterday.

From a stage at Midtown’s Metropolitan Club, the group, led by moderator Eric Orenstein of law firm Rosenberg & Estis, opined that in a persistently potent economy, coast-to-coast strength in real estate markets has created opportunities for a wide array of lenders to find their places.

Life insurers, for example, have thrived with a strategy of offering the markets’ most competitive rates in financing some of the industry’s least speculative transactions, explained Marcia Diaz, PGIM Real Estate Finance’s head of global originations.

“Life companies like to stick to the primary [domestic markets] where you know there’s solid job growth and depth of tenants,” Diaz said, adding that firms like hers were reluctant to venture even into prosperous markets that weren’t diversified enough.”I wouldn’t say there’s any redlining per se, [but in Silicon Valley or Seattle], we have to look closely at deals.”

Mindful that a tech bubble could quickly erode the profitability of commercial real estate in those markets, Diaz said that PGIM keeps an anxious eye on potentially unsustainable rent levels.

“At a certain pound per square foot, we’re out,” she said. Houston, with its fortunes intimately bound up in volatile energy markets, elicit that same skepticism from her.

Commercial mortgage-backed securities, on the other hand, have a special role in debt financings on the highest end of the spectrum of deal amounts—and in distributing the risk in loans whose payoffs might not be quite as transparent as those of the deals that life insurers spring for.

“Once you start getting above $200 million, [and have a deal that is] pushing leverage, [and] with hair on it, that’s where CMBS can step in,” Arethas added, referring to loans that back properties whose tenants require bespoke term considerations or follow risky or unorthodox business plans.

CMBS lenders can be especially powerful when they pool their firepower to tackle some of the industry’s largest single-asset financings, Citigroup‘s Paul Vanderslice explained.

“Very large deals, like the GM Building [refinancing]—that was done with five CMBS guys,” the banker recounted. “Not that the life companies couldn’t have [financed that transaction], but we found ourselves very competitive on that. But in the middle, [such as on a] $100 million loan with a loan-to-value ratio of 55 percent, we’re not going to win that against a life insurer.”

That vision of segmented roles—vanilla deals for life insurers, large-balance and incrementally more speculative deals for CMBS lenders, and the most risky construction lending relegated to specialized balance-sheet firms like Bank of the Ozarks—speaks to a measure of health and stability in the broader financing market.

But Lotus Capital‘s Faisal Ashraf, the only finance broker on the panel, sounded a note of deliberate concern, pointing out that as credit quality has improved, CMBS lenders have seen an inexorable decline in the sums of business available to bid on.

And regarding the business that traditional lenders do get done today, Asraf warned that understand risks may be lurking behind the headline numbers that banks report.

“I think there’s a lot more leverage in deals than people say there is,” the Lotus Capital founder said. Debt funds like to push the limits of the loan-to-value ratios at which they pursue business—and as property values and floating interest rates fluctuates, those lenders could at times find themselves overextended.

“The mark-to-market in [many] deals is probably higher than in any sticker price,” Ashraf mused.