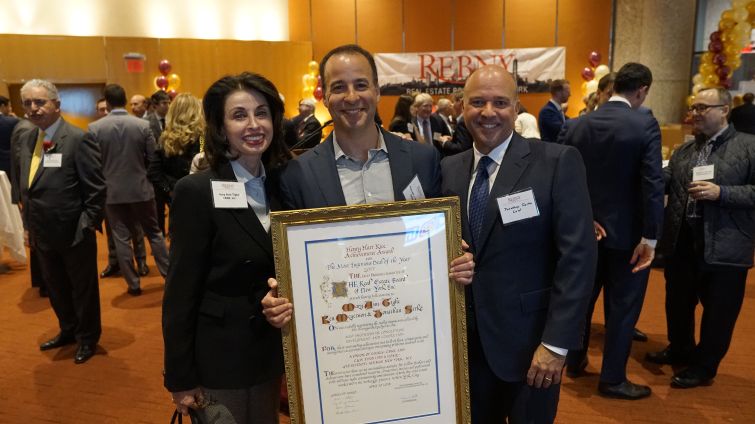 The best and brightest of the leasing and investment sales worlds always turn out for the Real Estate Board of New York’s Ingenious Deal of the Year Awards cocktail party, and this year was no exception.

Although teams from CBRE, Cushman & Wakefield, Eastern Consolidated, Singer & Bassuk, JRT Realty, Town Commercial and Newmark Knight Frank were all in the running for the award, only three out of 15 transactions across the sales, leasing and financing categories could take home the top prizes.

The first-place winners were Mary Ann Tighe and Ken Meyerson of CBRE and Jonathan Serko of Cushman & Wakefield, who arranged a 30-year lease for 1199 SEIU United Healthcare Workers East. The union and its retirement fund consolidated their separate offices into one big, 580,000-square-foot space at George Comfort & Sons’ 498 Seventh Avenue. The union’s new headquarters will encompass 14 floors of the 26-story building and include three new lobbies, new elevators, updated mechanicals, an auditorium and a cafeteria. It was Tighe’s eighth Ingenious Deal award and Meyerson’s second.

“In the end, the brokers’ solution created a building within a building at 498 Seventh Avenue and saved their respective clients $400 million compared to the cost of remaining in their existing locations,” said Savills Studley’s Woody Heller, who emceed the awards and chairs REBNY’s sales brokers committee.

After she received the award, Tighe said the transaction was challenging because “we were in the dark a huge amount of the time and [tried]  to bring together two people—the union and the funds—that were inextricably bound but have completely different ways of using the space.”

C&W’s Mark Weiss and Richard Bernstein took home second place for selling a commercial condominium at One West End Avenue to Touro College, which turned the condo into a dormitory for its Orthodox Jewish students. Developers Silverstein Properties and Elad Group had originally outfitted the 67,000-square-foot space for a nonprofit or a medical tenant, but Weiss and Bernstein helped Touro redesign the condo for 180 single dorm rooms.

“These highly complex commercial real estate deals required great vision, depth of market knowledge, and technical skill from each of the brokers to achieve ingenious solutions,” REBNY President John Banks said in a statement. “We are proud to honor their exceptional accomplishments and recognize all of the submitting brokers’ outstanding work in navigating transactions that are important to our industry and our city.”