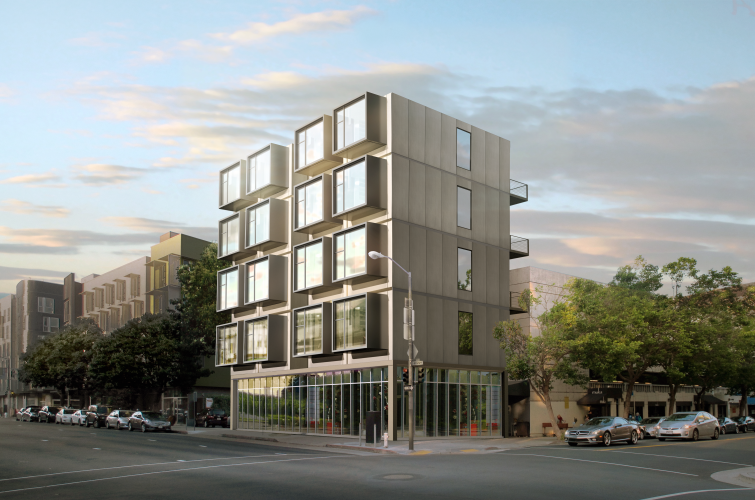 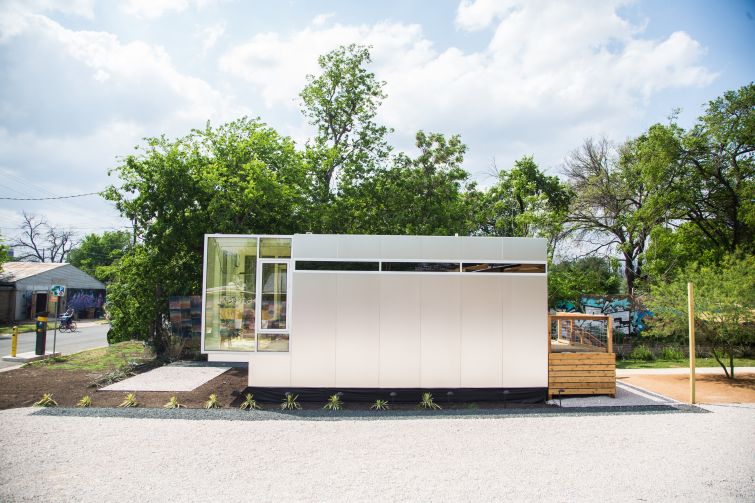 An individual Kasita unit made from a shipping container. Courtesy of Kasita 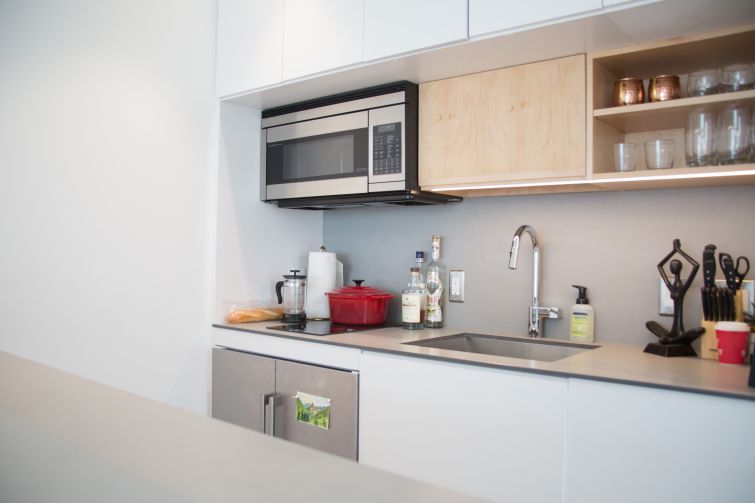 A small kitchen for a small unit. Courtesy of Kasita 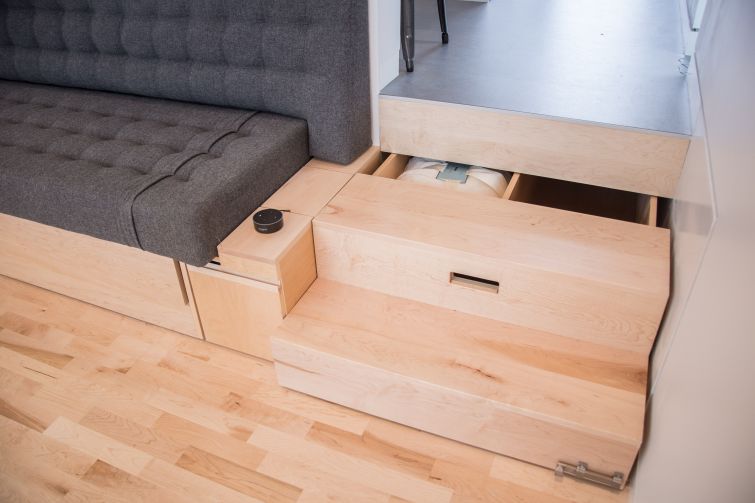 Storage gets crafty in limited space. Courtesy of Kasita 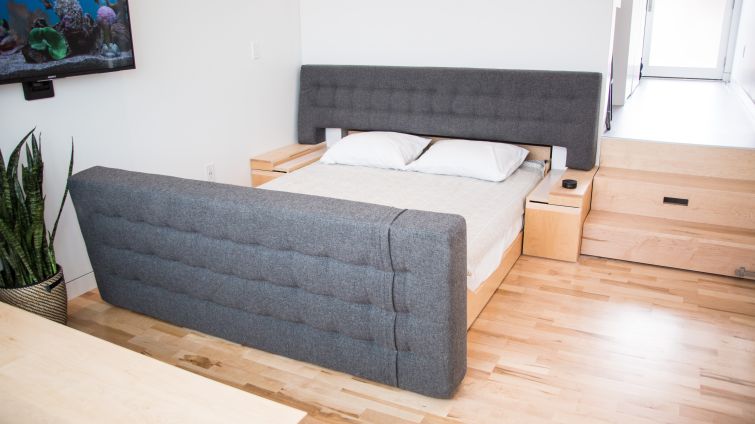 Speaking of craft, this bed is totally hidden beneath the kitchen floor until needed. Courtesy of Kasita 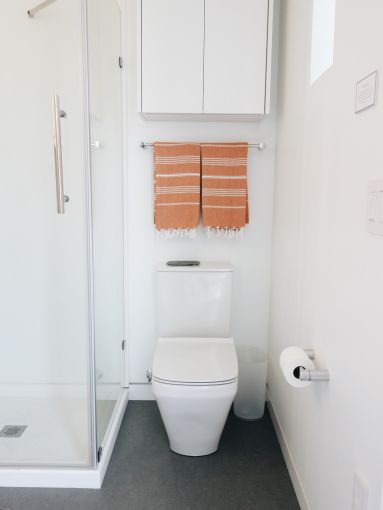 Just in case you were wondering. Courtesy of Kasita
Previous Next

For Paul Galvin, shipping containers are the answer to the rising cost of commercial and residential construction and the housing crisis in places like California, where home prices and rents are far beyond other locations in the United States.

SEE ALSO: A Boutique Office Tower Comes Together in NoMad

According to the legislative analyst’s office, the California legislature’s nonpartisan fiscal and policy advisory group, the average home in the state costs $440,000, about two-and-a-half times the average national home price ($180,000). Meanwhile, California’s average monthly rent is about $1,240, 50 percent higher than the rest of the country ($840 per month).

While using shipping containers for residential and commercial real estate projects is nothing new—Galvin, the chairman and CEO of SG Blocks, a designer and fabricator of container-based structures, is anticipating  challenging the public perception of what living and working in such developments is like. (Hint: It shouldn’t be likened to a sardine trapped in a tin can.) His firm received an ESR (Evaluation Service Report) from International Code Council (ICC) last year for their product, the first time, Galvin said, the ICC has approved a recycled material for construction.

He’s hoping one of his firm’s most recent projects, a three-story Heart of Los Angeles (HOLA) center in Los Angeles, developed in concert with Level Brands, is a catalytic moment for the construction approach. On April 20, media was invited to a “behind-the-scenes” construction tour of the 24,000-square-foot, three-story community arts and recreation center, slated to open this summer at 625 South Lafayette Park Place.

The arts center, which will serve more than 2,300 children and families, was built using 46 modified shipping containers and four steel-frame modular units.

“It’s not just lining up containers,” Galvin said. “It’s spreading out the containers to create negative space. It’s structuring the building in the first place to take advantage of the system. On the one end, we’ve built for the Aman hotel chain, which is one of the highest-rated [luxury] hotels in the world. On the other hand, we’ve built single-container housing solutions for military end-use and everything in between.”

The steel material used may not be novel, but the speed and, thus, the cost at which projects can be constructed using prefabricated shipping containers is key to providing more affordable housing, he said.

He estimates that in California, pricing for his products are at least 20 percent less than traditional construction. According to Buildings Guide, a custom steel price quote service , An average commercial steel building costs between $16 and $20 per square foot, including building package (I-Beams, purlins, girts etc.) , delivery, foundation and the cost of construction.However, since many retail & commercial buildings require additional finishing like insulation or façade customization, the cost may rise to $30 or $40 per square foot.

For developers or contractors, he said that savings rises to around 50 percent by halving the time and related costs involved in operating a traditional construction site.

Galvin has been in talks with affordable housing developers and nonprofits that provide supportive services to the homeless in the state, but could not release details to Commercial Observer at this time.

“It’s our hope to demonstrate that we can bring in products in urban America that don’t require tax credits or certificates or any of those lengthy financing requirement processes,” Galvin said. “We see ourselves as able to unlock properties that would have otherwise not been able to have been developed. That’s very exciting.”

Kasita, a micro-home development company out of Austin, geared to urban environments, also has California in its sites given the high cost of construction and need for affordable housing in the state.

Kasita was founded by Jeff Wilson, the former dean at Austin’s Huston-Tillotson University, in 2015. Wilson came up with the idea for micro-modern homes for urban environments after a social experiment in which he lived in a 33-square-foot modified dumpster for a year.

The product the company ended up manufacturing and selling in 2017 is far more upscale and attractive than the object that served as its original inspiration.

A solo Kasita, dubbed an Accessory Dwelling Unit (ADU), was stationed at The Platform at 8850 Washington Boulevard in Culver City one Saturday in late March as part of a company road show to gain public exposure—and potential customers—for its product, drew repeated attention from passersby. (Folks could sign up for private tours or check out the unit during an open house later that evening.)

Its boxy exterior gave way to an inviting interior outfitted in soothing earth tones and modern conveniences, including a home automation system that gives the homeowner control over the living environment from lights, climate to sound.

The prefabricated units made with eco-friendly materials, arrive fully equipped with appliances and furniture, including a queen-size bed that can be quickly tucked away (without being made) in the living area. They range in size from 374 square feet for standalone units up to high-density stackable units of either 408 or 816 square feet, depending on whether the buyer opts for a studio or pair of units. They start at around $89,000 and go up to around $129,000 per unit depending on the options selected. The company also offers ADA-compliant models.

Homebuyers or developers can opt to handle all the zoning and building permitted required or use a concierge service offered at an 18 percent upcharge. Homes can be financed through traditional means and, according to a company release, can be installed in as little as one day once permitting and foundation are completed and utilities installed.

Casey Wu, the CFO for Kasita, said that customers for its product range from homeowners wishing to add a standalone unit to their backyards for their own personal use or to rent out, to urban developers looking to make the most of their lots and investments. These include an unnamed Houston developer and another developer who has ordered 200 to be built on several lots in the outer boroughs of Manhattan.

“The costs for these units are still cheaper than what people can buy or afford to build [in terms of] affordable housing units here in California,” said Wu, adding that while the company is focused on private buyers, it hopes to work with cities seeking to develop permanent affordable housing solutions in the future.

“Our facility right now can only produce 100 units a year,” he said. “We are going to be looking at expanding our capacity. We’d love to expand out into the West Coast. The cost of construction is much higher out here. If you can keep producing housing supply in underutilized lots, whether it’s the backyard of a house or an irregularly shaped lot that people can’t figure out what to do with, the more houses you can put in a place like California, where housing costs are out of control, it should relieve some of the pressure on prices.”

Grosvenor Adds to DC Footprint with Pair of Residential Acquisitions