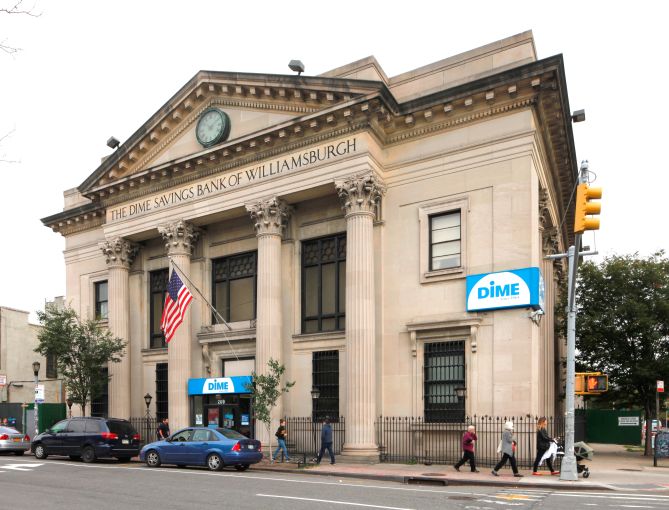 The Dime Savings Bank of Williamsburgh—which will soon be redeveloped as part of a 22-story residential and commercial complex—is now a landmark.

The city’s Landmarks Preservation Commission voted today to designate the Neo-Classical bank at 209 Havemeyer Street a landmark, according to a press release from the agency. The building was constructed as the bank’s headquarters between 1906 and 1908, during a period of growth in Williamsburg that followed the completion of the Williamsburg Bridge. Helmle & Huberty designed the 16,700-square-foot structure, which was constructed out of Indiana limestone and features Corinthian columns, modillions (elaborate brackets that support the cornice) and a clock.

In a statement, LPC Chair Meenakshi Srinivasan called the property “a testament to the elegance and grandeur of the City Beautiful Movement.”

Charney Construction and Tavros Capital Partners purchased the building from Dime Community Bancshares for $12.3 million last November, after paying $80 million for the adjacent site and air rights in March 2016. Late last year, the bank relocated across the street to a recently completed rental building at 282 South 5th Street.

Charney and Tavros plan to transform the two sites into a 340,000-square-foot mixed-use project called “The Dime.” With the help of architecture firm Fogarty Finger, the developers plan to build 100,000 square feet of office space, 50,000 square feet of retail and 177 rental apartments. Sam Charney, the principal at Charney Construction, told Commercial Observer that construction recently began on the new building, and workers just put in foundations. The former bank building will be renovated into either office or retail, depending on what kind of commercial tenant signs on for the space.

“This is a fitting tribute to the building’s architecture and its long history as a pillar of the historic financial center that was South Williamsburg,” Charney said in a statement. “The Dime Savings Bank of Williamsburgh has served as a local source of pride and community centerpiece for the past century, and is a true reflection of the socioeconomic diversity that has historically made this neighborhood and Brooklyn so special.”