The Area Around Penn Station Saw a Massive Drop in Vacancy 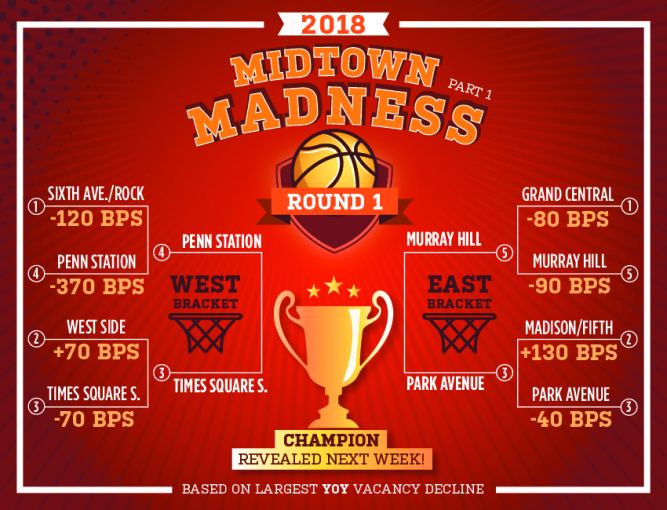 It is time for the fifth annual Stat of the Week Midtown Madness tournament, and if Midtown is anything like this year’s National Collegiate Athletic Association (NCAA) March Madness tournament, expect some major upsets—for the first time in NCAA history, number 16-seeded University of Maryland, Baltimore County (UMBC) scored an unexpected victory over number one-seed University of Virginia. With the odds against Madison/Fifth Avenues, will this submarket be able to repeat as 2018 champion, or will it succumb to an underdog submarket? So let’s tip off to crown this year’s champion, based on year-over-year statistics through February.

Out of the nine Midtown submarkets, five are located in the east region, and the two smallest of those submarkets—East Side/U.N. and Murray Hill—will meet in a play-in game to make the tournament. This contest will be decided by new leasing activity over the past 12 months as a percentage of the size of the market. East Side/U.N. recorded 1 million square feet of new leases, while Murray Hill new leasing totaled 886,215 square feet. Although East Side/U.N. produced more activity, it only accounted for 4.8 percent of the submarket’s inventory, while the smaller Murray Hill submarket recorded an upset, as its new leasing accounted for 6.3 percent of its submarket size.

The first round of the tournament will be decided by the largest decline in vacancy, and each submarket will be seeded in its region by total inventory size. The east region starts off with the number one-seeded Grand Central posting a solid vacancy decline of 80 basis points to 10.7 percent. But the feisty Murray Hill submarket continues its Cinderella story and scores an upset, as this fifth-seed recorded a 90-basis-point drop in vacancy to 6.3 percent. The number two-seeded Madison/Fifth submarket, 2017’s champion, is in danger of going out early, as vacancy is rising in the number two-seeded submarket, up 130 basis points to 12.1 percent. This allows the third-seeded Park Avenue to score an easy upset with a 40-basis-point decline in vacancy to 10.7 percent.

The west region’s number one-seeded Sixth Avenue/Rock Center recorded a strong 120-basis-point drop in vacancy to 9.6 percent, but it was not enough to get past the first round. Penn Station shined with a 370-basis-point decline to 6.5 percent to record yet another upset win this year. In the second pairing in the west region, the number two-seeded West Side submarket recorded a 70-basis-point increase in vacancy to 8.7 percent. This poor performance allowed the third-seeded Times Square South to win this round easily, as vacancy dropped 70 basis points to 8.1 percent.

This year’s Midtown tournament truly defines “madness,” as all five games were won by the underdog submarkets. Come back next week to find out which submarket will win the 2018 Midtown Madness tournament!