MIPIM: US Experts Tell World America Is Loaded With Opportunities, So Act Fast 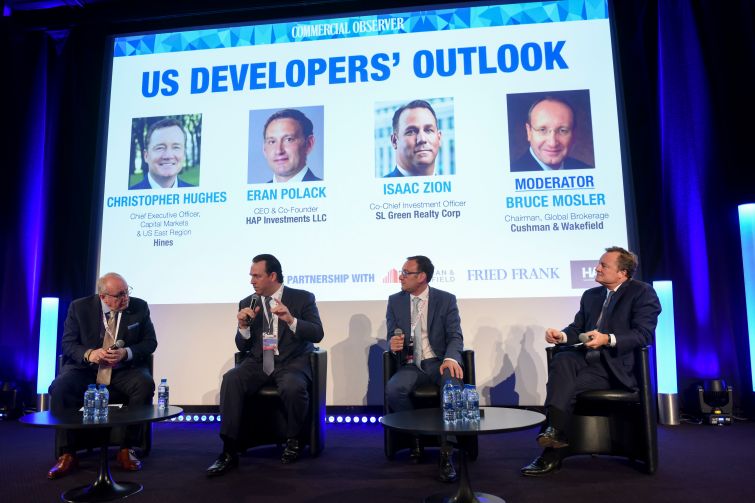 Those that attended Commercial Observer’s panel on United States real estate investing today—the second day of the annual MIPIM (or Marché International des Professionnels d’Immobilier) property conference in Cannes, France—were told there are ample deals to be made in America.

At the event “Developing & Investing in the United States: Where, What & How?” some of the most prolific developers and lenders in the U.S. told real estate professionals not to worry about reports of rising interest rates, to expand their horizons beyond premium “gateway” markets (like New York City or San Francisco) and to act quickly or risk losing the deal.

Brookfield Property Partners Senior Managing Partner and Chairman Ric Clark opened the event by talking about the three trends his company sees affecting the U.S. real estate market: booming population growth of urban areas; the rise of millennials and increases in innovation; and technology for properties.

“Growing urban populations clearly present major challenges, but also major opportunities for those in the real estate business,” Clark told the audience. “The new city dwellers are going to need places to live and work, new schools and hospitals and a massive investment infrastructure will also be required.”

Mosler informed the crowd of the reduced investment activity in New York City and other U.S. gateway markets, which resulted in a 23 percent drop to $96 billion last year from $125 billion in 2016. Comparatively, total investment in non-gateway U.S. markets dropped to $300 billion in 2017 from $339 billion the previous year—just a 3 percent dip.

Hughes mentioned that investors need not focus only on gateway cities, because there are great opportunities elsewhere in the country.

“It’s a default to look at the gateway cities,” Hughes said. “As you start to look at the U.S. markets you should pay attention to the broader U.S. markets. You’ll make a mistake if you come to the U.S. and think there are only three cities to invest in. Follow the education [centers]; follow the underlying demand drivers.”

Zion pointed out that foreign investors need to understand that deals in the U.S. happen fast, so they need to be decisive.

“The quick ‘yes’ is always the best answer,” he said. “The quick ‘no’ is almost as good. It’s the long, long ‘maybe’ which unfortunately happens way too often. And if you are in that position you are not going to be able to act on potential opportunities.”

Since capitalization rates—the expected rate of return on a project—are higher in the U.S. than in major European markets, investors can see a lot of upside, Shields said.

“You are breaking 3 [percent] caps in Paris and Berlin, so our risk guys when they see a 5 [percent cap rate], even though the base rate is higher, they like the U.S.,” Shields said. “And it’s such a big market. There are so many deals compared to [Europe]. London and Paris are the only two markers that have deal flow that compares to the U.S. So we could be a lot more selective and cherry pick a bit and figure out where we can actually compete.”

And since interest rates are climbing, now is the time to act, said Donner, who suspects that the movement in rates will boost deals.

“I think we are going to see more volume just because rising interest rates [mean] it’s time now for clients to lock in rates for the long term,” he said, “because on a really long-term perspective these are ultra-low rates.”