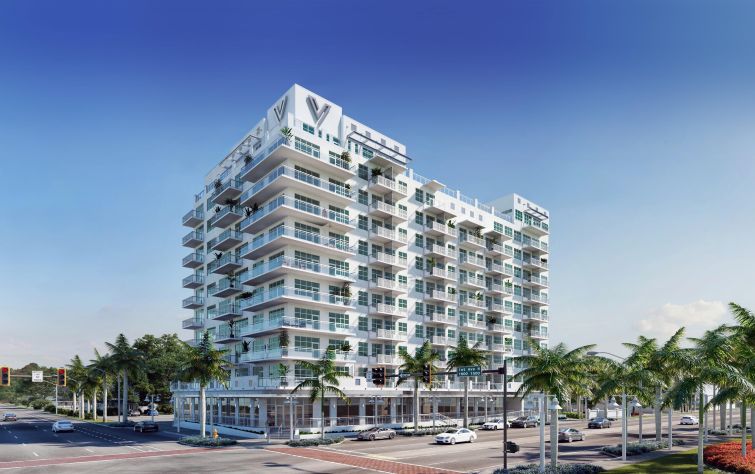 A rendering of The Vantage in St. Petersburg, Florida. Image: HALL Structured Finance

Dallas-based HALL Structured Finance will lend $35.5 million to finance the construction of an apartment high-rise in St. Petersburg, Fla., according to an announcement from the company.

The three-year loan, made to Michigan’s DevMar Development, will back work on a project, slated for completion in the second half of 2019, in a burgeoning residential market.

Located on the corner of 16th Street and 1st Avenue North, the 11-story rental building, known as The Vantage, will split the difference between a pair of trendy neighborhoods in the Gulf Coast city—the EDGE District and the Grand Central District—on a site about a fifteen-minute drive from downtown Tampa. Its 211 apartments, averaging 631 square feet each, will tilt mostly towards studios and one-bedrooms.

That apartment mix “creates a level of affordability” for the project’s target millennial demographic, said Mike Canning, an HSF executive who worked on the loan. “When we did our site visit, we visited other apartment buildings around town, and most of the managers we spoke to said that their studios and one-bedrooms are constantly rented.”

All the comparable properties HSF toured, he said, had occupancy rates in the high 90s.

The loan, brokered by Q10 Lutz Financial Services, will finance DevMar’s first foray into Florida—a proposition that made Q10’s prior relationship with HSF a crucial catalyst to the Midwestern developer’s finding funding for the project.

“The developer doesn’t have an established track record with a Florida bank, so it’s a spot we can slide in and really fill a gap,” Canning said. “Institutional banks get nervous [about making new loans in Florida]. They have a lot of exposure there, and they start to pull back.”

Given the company’s new arrival on the Gulf Coast scene, a DevMar executive noted his appreciation for the chance to nab debt to kick off construction.

“The HALL Structured Finance team went above and beyond to provide us with a uniquely tailored, flexible approach to finance the construction of The Vantage, and we are thrilled to be getting started,” Jason Fracassa, a vice president at the development firm, said in a statement.

With a population of nearly 250,000, St. Petersburg was Florida’s fifth-largest city at the time of the last national census, ahead of more renowned spots like Orlando and Fort Lauderdale. Many workers commute east across Tampa Bay to downtown Tampa. But financial services giant Raymond James employs almost 4,500 workers at its St. Petersburg headquarters, 2,200 more work in the city at the main offices for the Home Shopping Network.