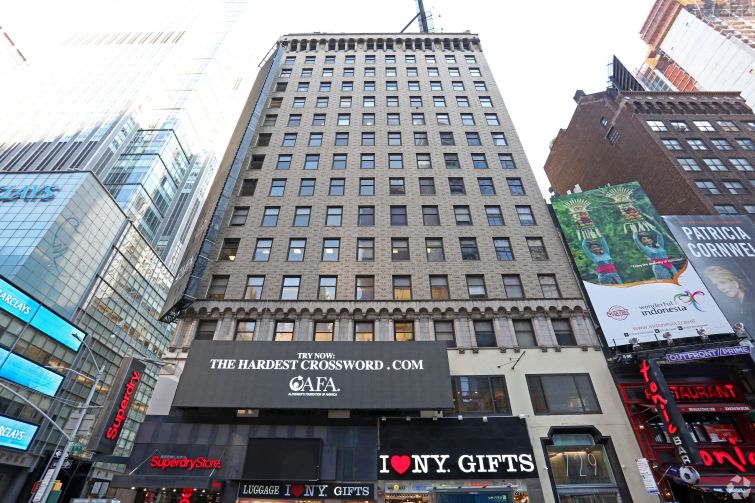 Himmel + Meringoff Properties has nabbed a $60 million loan to refinance the office component of its mixed-use building at 729 Seventh Avenue in Manhattan, Commercial Observer can exclusively report.

The 12-year balance-sheet loan comes to Himmel + Meringoff at a fixed rate of 4.25 percent with interest-only payments during the first years of the term, according to Meridian Capital Group, which arranged the financing.

New York City-based Signature Bank is the institution behind the loan, a spokeswoman for the bank confirmed.

“This was a transaction Signature Bank was proud to win with a top-tier, long-time client with a solid industry reputation and strong ties to the bank,” John Zieran, Signature’s co-head of commercial real estate, said in a statement.

The 17-story building, in the heart of the Theater District between West 48th and West 49th Streets, comprises more than 164,000 square feet of office space that hosts tenants like Playbill, The Actors Fund and Columbia University.

Its location, a stone’s throw from all 40 Broadway theaters, has knit the building into the fabric of the entertainment industry since it was built in 1915. The next year, when William Randolph Hearst leased the building’s fifteenth floor for the animation operation of the International Film Service, the landmark became “as important a film industry location as Hollywood,” Louis Pizzitola, a Hearst biographer, wrote in a letter to The New York Times.

Hearst also kept a private office in the building, and built a “California-style bungalow hideaway, fitted with Japanese gardens” in penthouse apartment there, where he cavorted with mistresses like actress Marion Davies.

The property was also home for years to United Artists, hosting such movie-business luminaries as Mary Pickford and Douglas Fairbanks.

But thanks to a recent renovation, the building’s common spaces are no longer as old as talkies themselves. A recent refresh designed by MdeAS Architects updated the lobby with marble, steel and glass accents, which a newly expanded entryway has let in more light.”With the lobby renovation completed and new leases signed, Meridian negotiated a refinancing which included income from the spectacular signage unique to the property’s strategic location in…Times Square,” Meridian’s Allan Lieberman said in a statement.