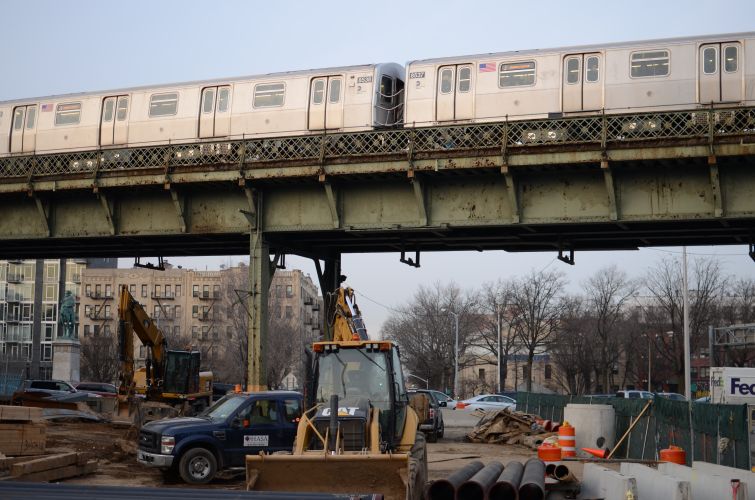 A subway train passes above a construction site in Williamsburg. Photo: Wikicommons

Madison Realty Capital will lend $31.5 million to support the development and construction of a mixed-use building in Williamsburg, Brooklyn, Commercial Observer can exclusively report.

The seven-story project, located at 744 Bedford Avenue, will include 88 apartments and more than 18,000 square feet of retail space. MRC declined to confirm the identity of the borrower, but public records reflect that Brooklyn developer Mendel Roth has owned the property through various holding companies since 1993.

The site, between Flushing Avenue and Park Avenue just east of the Brooklyn Navy Yard, is now vacant. That means that Roth’s building will benefit from New York State’s 421a tax exemption, which will partially excuse Roth’s company from paying increases in property taxes over the next ten years.

MRC’s 24-month, floating-rate mortgage won the day for Roth because of the firm’s capacity to act as a one-stop shop, its co-founder, Josh Zegen, said.

“The borrower approached MRC based on our ability to be a single, flexible source of construction financing to complete the project,” Zegen said. “We’ve been successful in delivering the funds required, and we believe that this project will be successful based on its excellent location, thoughtful design and vested 421a benefit.”

The building will feature 86 one-bedroom apartments—about 560 square feet a piece—and two two-bedrooms, around 200 square feet larger, according to MRC. When the building is ready for occupants in spring 2019, each apartment will claim its own balcony or terrace, and residents will have access to a 76-car garage on the building’s second floor.

The retail space will be well suited for a grocery tenant, Zegen wrote in an email to CO.

Isaac Stern Architects, the firm behind the building’s design, according to CoStar Group, did not respond to a request for comment. Neither Mendel Roth nor representatives from the holding company that owns the lot, Bedford Roth Holdings, could be reached for comment.