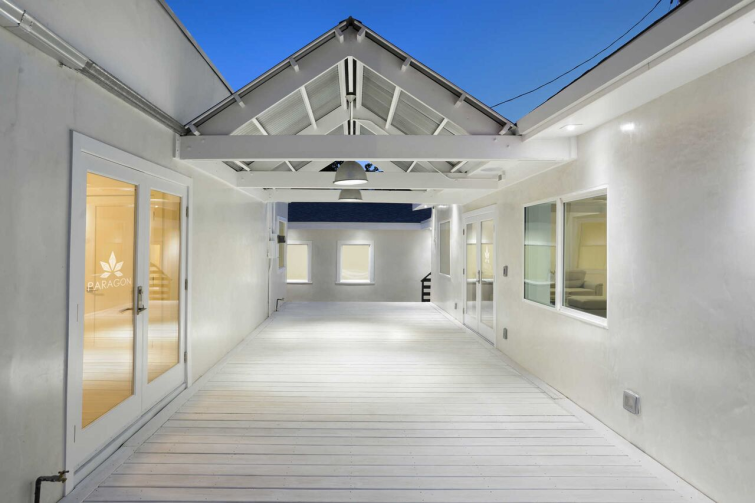 Paragon Spaces, the first coworking space in Los Angeles for the Cannabis industry, is set to open in Hollywood on July 1. Photo: Paragon

Los Angeles’ first coworking space exclusively dedicated to startups and freelancers in the cannabis industry is set to open in Hollywood on July 1, according to an official release from Paragon, which bills itself as the “leading blockchain tech platform for the cannabis industry.”

The venture, Paragon Space, has leased 4,364 square feet at 1463 Tamarind Avenue, financed fully through cryptocurrency. In addition to being the first cannabis-centered coworking space in L.A., Paragon bills the deal as one of the first all-crypto real estate deals of its kind. They raised approximately 550 Bitcoin and 8,100 Ethereum, according to Paragon.

As of Jan. 1, California joined several other states that have legalized the recreational use of marijuana. Nonetheless, traditional business services including, most notably, banking, have shied away from servicing the industry overall. Despite the fact that 29 states have legalized the possession and sale of marijuana for medical uses, and eight of those have approved cannabis for recreational purposes, federally regulated banks have refrained from handling industry funds given that the drug remains illegal under federal law, as the Los Angeles Times reported late last year.

The Hollywood space will include tiered amenities, with desks and offices only accessible to PRG currency holders—Paragon’s cryptocurrency, Paragon CEO Jessica VerSteeg told Commercial Observer. Members of the greater cannabis community will have access to public spaces, meeting rooms and a communal area that includes a café. (The café will also require PRG coin currency.)

The location was crowdsourced by PRG currency holders between August 15 and October 15, 2017, where community members used PRG Coin to vote. VerSteeg said her company has about 10,000 PRG holder/members.

Paragon plans to have various operational systems rolled out by April 20, including a coworking space application and reservation system. The team will also release its first version of the online seed-to-sale tracking system with mobile app. VerSteeg said the seed-to-sale tracking system is the main product of the platform that “allows full transparency, verifiability, and increased efficiency for business and consumers.”

Within the Paragon space, flex desks, lounging areas and offices will be available to rent. Members of the community will also have access to conference rooms to host their own events and meetings, according to an official company release. The cost of renting the space in PRG will be calculated based on the floor plan and its capacity, however Paragon said it expects the average price to rent to be much more affordable when compared to the wider Greater Los Angeles office market, which according to a fourth-quarter 2017 Colliers International market report, averaged $3.03 per square foot.

The lounge and outside area of the building will provide additional space for meetings and events as well as a communal area.

Baky Soumar of Pitch Concepts, a Chicago-based design firm with a focus on customized urban rooftop decks and backyards, is expected to lead design renovations aimed at transforming the building into a high-tech hub.

To further their mission, Paragon is also engaged in discussions with Fundanna, an online regulated crowdfunding platform for cannabis businesses where retail investors have the opportunity to invest in cannabis startups.

“Fundanna provides a great means of raising capital, while Paragon Spaces functions as a hub for building out new businesses,” said VerSteeg.