There Were Big Gains in the Jobs Sector; Here’s Where 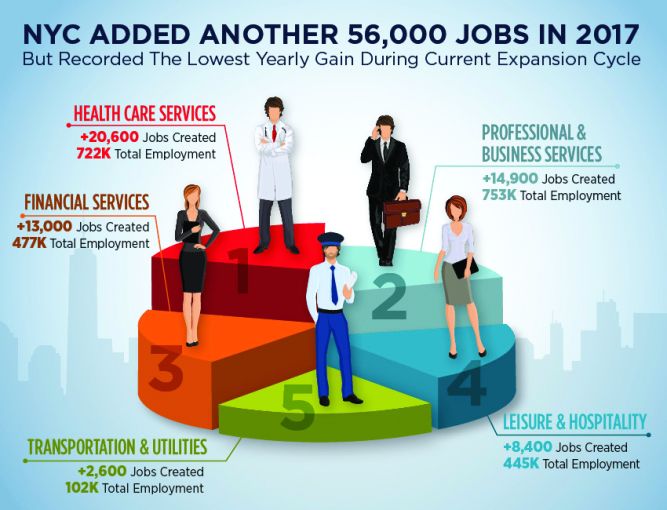 In 2017, New York City gained 56,000 jobs, which brought the city’s record level of employment to 4.443 million jobs. Although annual employment growth continues, it is significantly lower than the average of 102,400 jobs added over the previous six years. Despite job creation slowing, many sectors reached record highs in 2017, so let’s review the top five industries to add jobs last year.

5. Transportation and Utilities
A newcomer to the list, this sector added 2,600 New York City jobs in 2017. The 138,500 jobs in this industry marks the highest year-end level since 1990, and this sector should continue to grow as the city focuses on infrastructure improvements over the next several years.

4. Leisure and Hospitality
With an estimated 61 million tourists visiting New York in 2017—the leisure and hospitality industry continues to boom to meet the demand.  This sector added another 8,400 jobs in 2017, bringing its year-end employment level to 446,700 jobs.

3. Financial Services
This sector added 13,000 jobs in 2017—the largest one-year total since 2006—and reached the highest year-end employment level since 2000. The financial sector is the only sector in the top three that surpassed its 2016 growth rate, back when it added only 500 jobs.

2. Professional and Business Services
The largest industry in the city added 14,900 jobs to its all-time high total of 752,600 jobs in 2017. Even though this sector continues to gain jobs, it marked the lowest annual job creation during this expansion cycle and dropped from the 27,000 jobs added in 2016.

1. Health Care Services
This industry added 20,600 jobs in 2017 and is the only sector to record positive employment growth every year since 1991. With 722,000 jobs in this sector, it also boasts the highest level on record. This sector’s growth did slow compared to 2016, when 35,800 jobs were created.